Explained: These are the countries that have not imposed lockdowns

While millions across the world are confined to their homes, offices and businesses are shut, and economies are on the verge of collapse, there are some countries that have not followed others in locking down their residents. 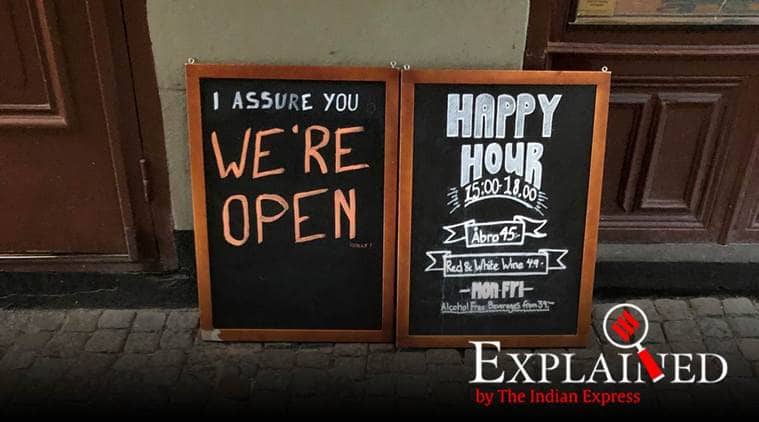 A sign assures people that the bar is open during the coronavirus outbreak, outside a pub in Stockholm, Sweden. Reuters Photo

Amid the coronavirus outbreak, countries across the world have relied on complete or partial lockdowns as a mitigative step to control the spread of infection. Among these countries, lockdowns imposed by India, China, Spain and Italy have been some of the longest and most stringent. Even so, while millions across the world are confined to their homes, offices and businesses are shut, and economies are on the verge of collapse, there are some countries that have not followed others in locking down their residents.

According to Johns Hopkins Coronavirus Resource Centre, 187 countries/regions have reported cases of the disease. There are now more than 3 million cases worldwide and more than 172,000 deaths have been recorded with the US recording the most number of cases at more than a million.

Countries with no lockdowns and how are they coping

Sweden: It is one of the countries that stood out the most for not imposing a lockdown. The country, which has a population of over one crore, has recorded more than 21,000 cases and more than 2,400 deaths till now. Most schools and businesses are still open in the country and people have been urged to not venture out of their homes unless necessary. Restrictions are stricter for older people who have been told to maintain social distancing, avoid using public transport and not undertake non-essential travel. Even then, a large proportion of the death toll in the country comprises those above the age of 70 years as infection spread in care homes.

Steering Sweden’s policy to tackle coronavirus is epidemiologist Anders Tegnell who maintains that like other countries, Sweden, too, wants to slow down the spread of infection but by putting the responsibility to follow social-distancing measures on the people, rather than by a lockdown-like mandate. Tegnell has also dismissed claims that the country’s policy is to build herd-immunity by letting a majority of the population get infected with the disease.

In an interview with a Swedish newspaper in March, Tegnell said, “The main tactic is not about that (herd-immunity), but that we have a slow spread of infection and that the healthcare system gets a reasonable amount of work”.

Some health experts disagree with Sweden’s approach. In a letter published in a Swedish newspaper Dagens Nyheter recently, 22 scientists called into question the approach followed by the officials responsible for shaping the country’s policy against COVID-19 and urged politicians to intervene and undertake “swift and radical measures”. Sweden’s Public Health Authority (PHA) is an autonomous body and functions independently from the government due to which it is able to make decisions without government interference. In fact, in most of the media briefings about the disease, politicians are rarely seen.

South Korea: South Korea was one of the worst-hit nations during the early stages of disease outbreak, but has remained to be one of the few that has managed to keep the situation under control without a lockdown. The country followed the strategy of aggressive testing, contact tracing and isolation. On Thursday, the country recorded no new domestic cases for the first time in 10 weeks. There are more than 10,000 cases in the country, with 247 deaths.

Turkmenistan: Turkmenistan is one of the few countries in the world with no reported cases of the disease as of now. While flights from Beijing and Bangkok and later all international flights were suspended during the disease outbreak and the country began to lift its citizens from other countries in February-end, no lockdown measures have been imposed in the country as such. Even so, there are checkpoints to enter big cities and towns where passengers’ body temperatures are checked and traffic has been restricted between different provinces.

On April 25 and 26, thousands of spectators gathered in stadiums to celebrate Horse Day, a local holiday, where President Gurbanguly Berdymukhamedov’s horse was declared as the most beautiful by the judges.

But there is skepticism about the claim of having no cases of the disease as the country is believed to have one of the most repressive and secretive governments in Central Asia. On April 28, Radio Free Europe Radio Liberty (RFE/RL) reported that ahead of a visit to the country by WHO’s experts, authorities were clearing out hundreds of people from quarantine zones in an attempt to hide suspected cases of coronavirus. Foreign Minister Rashid Meredov, however, maintains they are not hiding anything. A couple removes temporarily protective face masks that they wear to avoid the spread of the coronavirus disease (COVID-19), as they take a picture at an amusement park in Seoul, South Korea. Reuters Photo

In fact, some news reports have claimed that the country “banned” the use of the word “coronavirus” by media outlets and arrested people if they were found discussing it. One report in RFE/RL said the state media was treating it as if the disease never existed as they are not saying anything about the effects of coronavirus, “and the word has even been removed from health information brochures distributed in schools, hospitals and workplaces, according to Turkmenistan Chronicles, one of the few sources of independent news, whose site is blocked within the country,” the report said.

An article in The Diplomat said, “The Turkmen government is, in a twisted way, taking the coronavirus seriously — just not as a public health threat.”

Tajikistan: Tajikistan reported its first 15 cases of the disease on April 30. The schools have been closed since April 25 and its domestic football league was suspended on April 26. The country has largely been in denial about the spread of the disease in the country for the past few weeks.

According to Eurasianet, mass gatherings have been banned, including for Ramadan, and medical face masks have been mandatory.