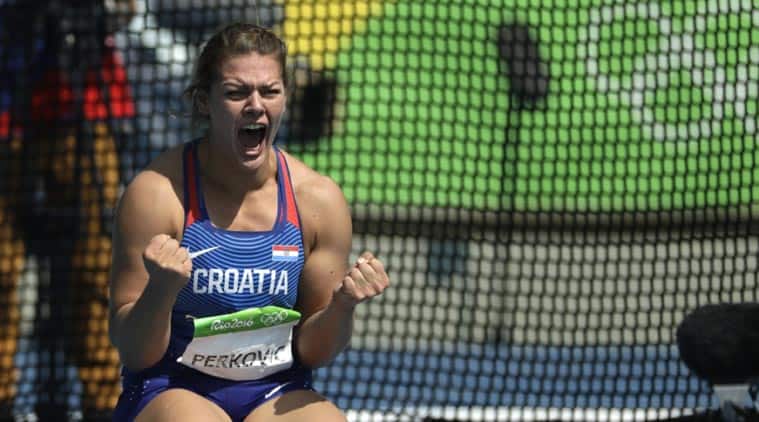 Croatia’s Sandra Perkovic flirted with disaster before snatching gold in the women’s discus on Tuesday, successfully defending her London Games title despite fouling five of her six throws in the final.

The 26-year-old Croatian was the hot favourite heading into the event but was on the brink of early elimination after fumbling her first two throws.

Perkovic appeared on edge but dug deep to hurl her third effort 69.21 metres and retain her crown, winning by 2.48 metres ahead of rivals who never looked like matching her.

“I was angry with myself after first throws,” Perkovic told reporters.

“I said ‘Sandra, now or never’. So I become champion.”

Perkovic, who has dominated women’s discus since London, becomes only the second woman to successfully defend her Olympic discus title.

The victory cements her place among the discus greats, though one stain on her record was a failed drugs test in 2011 that led to a six-month suspension.

Perkovic had denied taking performance-enhancing drugs and said she had inadvertently taken a new, American-made energy drink which contained methylhexamine, a banned psychostimulant, that was not declared on the label.

After winning in Rio, Perkovic said she did not want to think about the suspension — which she reiterated wasn’t her fault — and instead wanted to focus on all the success she had achieved since the London Games.

“I have a daughter so I had to make a lot of sacrifices to win this medal,” she said.
Cuba’s Denia Caballero, who won a surprise victory at last year’s world championships, had to settle for bronze.

“I am disappointed, I wanted the gold medal. But this is my first Olympics. I will be back,” said 26-year-old Caballero.