PV Sindhu registers a 21-19, 21-10 triumph in the semifinals over Nozomi Okuhara to become the first Indian shuttler to enter the final of Olympics. 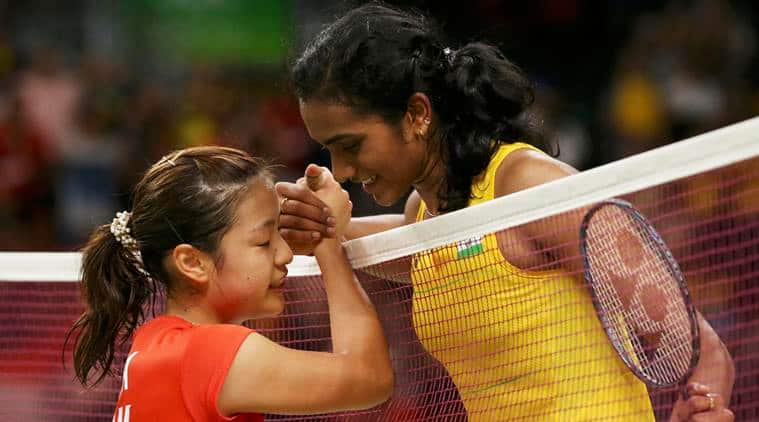 India’s P.V. Sindhu thumped Nozomi Okuhara of Japan to enter the final of the women’s singles event of badminton competitions, assuring the country at least a silver medal at the Olympic Games here on Thursday.

World No.10 Sindhu registered a 21-19, 21-10 triumph in the semi-finals over world No.6 Okuhara to become the first Indian shuttler to enter the final of the Olympics.

In the final, she will face two-time reigning world champion Carolina Marin of Spain, who beat defending champion Li Xuerui of China 21-14, 21-16.

Irrespective of the colour of the medal in the final on Friday, it will be India’s second medal in the Rio Games after wrestler Sakshi Malik bagged a bronze medal in the women’s 58kg category.

For Sindhu, who was on a giant-killing spree after dismissing two higher-ranked opponents — Chinese Taipei’s Tai Tzu Ying and World No. 2 Wang Yihan of China in the pre-quarter-final and the quarter-final respectively — Thursday’s win was also an extension of her good form.

Sindhu’s height and long reach gave her a lot of advantage against the pint-sized Okuhara, who also had her right thigh strapped.

Especially, Sindhu’s sharp cross-court game and half smash helped her get off to a fine start.

Sindhu reached the mid-game interval with a 11-6 lead and after a two-minute break, Okuhara’s delectable drop shots helped her bounce back. She was trailing 10-12 when Sindhu forced her to hit the net and take a 14-10 advantage.

Later, Sindhu took a 15-12 lead that became 17-14 but Okuhara’s net game helped her almost reduce the deficit. She kept coming back at Sindhu, forcing the Indian to make some unforced errors — hitting wide.

But Sindhu remained always in the lead, albeit a slender one-point advantage, before winning the game 21-19.

In the second game, Sindhu again began convincingly taking a 3-0 lead before Okuhara took five straight points to sit at a 5-3 lead.

Afterwards it was a neck-and-neck contest. Sindhu rattled Okuhara with two straight points as the Japanese hit wide and failed to return a fierce smash from the Indian.

Okuhara again held the lead at 7-5 and at the mid-game interval Sindhu led 11-10.

After the break, Sindhu turned more aggressive and played a fearless game to stun the Japanese who looked short of ideas.

Sindhu kept earning points, hitting one smash after another to enjoy a comfortable ride. As many as 10 points on the trot catapulted her to the final with a 21-10 win in the second game.

Afterwards, what followed was a screaming celebration from Sindhu and her camp.