Who was Archbishop Desmond Tutu?

Deshmond Tutu was one of the driving forces behind the movement to end racial segregation and discrimination by the white minority government in South Africa from 1948 till the year 1991.

Who is Jagdish Thakor, the ex-MP appointed as Gujarat Congress chiefPremium Story

Congress Working president Hardik Patel welcoming the decision, told The Indian Express, “the appointment is 10 years late. The party should have used his potential long back”.

Who is Parag Agrawal, the new CEO of Twitter?

Parag Agrawal, an alumnus of Indian Institute of Technology (IIT) Bombay, was appointed as Twitter CTO on March 8, 2018.

Who is Saurabh Kirpal, the openly gay senior advocate recommended by SC Collegium?

The delay in Kirpal's recommendation has garnered criticism in the legal circles, with many speculating that it is due to his sexual orientation.

Who is Malvika Sood, the philanthropist who has announced her entry into Punjab politics?Premium Story

A prominent social worker in Moga town, Malvika Sood Sachar is known for her work in the education and health sectors. With her brother Sonu Sood, an actor, she runs the Sood Charity Foundation 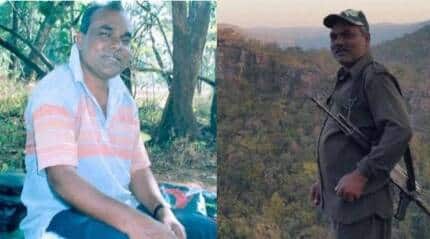 "Teltumbde was the main financier of the Bhima-Koregaon programme organised in Pune three years ago," said a former senior police officer.

Who is the Telangana engineer arrested for threats to Virat Kohli’s daughter?Premium Story

A computer science engineer, Akubathini passed out of IIT-Hyderabad in 2019. In campus placements, he received one of the highest pay packages that year, offered by a food delivery app.

Justice N V Ramana will take over as the 48th Chief Justice of India next month.

Who is Vivek Murthy, the Indian-origin doctor appointed as Surgeon General by Joe Biden

As surgeon general, Murthy will have a task at hand given the impact of the coronavirus pandemic in the US and will be one of Biden’s closest advisers on the matter besides handling the government's public outreach.

Who is Jonas Masetti ‘Vishvanath’, the Brazilian man praised by PM Modi in ‘Mann Ki Baat’?

In the latest episode of ‘Mann Ki Baat’, PM Modi outlined Masetti’s life and what drew him to Indian culture and the study of India’s sacred texts.

Who is Jacob Blake

The shooting in broad daylight captured on cellphone video that quickly spread on social media, ignited nights of civil unrest over racial injustice in several cities that included a wave of arson, widespread vandalism and a separate shooting that claimed two lives in Kenosha. A 17-year-old has been arrested.

Prime Minister Narendra Modi on Tuesday expressed deep sorrow over the death of Varanasi's 'Dom Raja' Jagdish Chaudhary and said he represented the eternal traditions of the holy city.

Watched ‘Gunjan Saxena: The Kargil Girl’? Here’s the story of the woman it is based on

The daughter of an Army officer, Gunjan was summoned by the IAF when the conflict between India and Pakistan escalated in 1999.

Who is Geeta Arora aka Sonu Punjaban?

While sentencing her to a 24-year-prison term, the court observed that Sonu Punjaban "has no right to live in a civilised society" and "crossed all limits to be called a woman".

Who is Govind Singh Dotasara?

After joining the Congress party in 2005 while working as a lawyer, Dotasara won his first assembly elections in 2008 from the Lakshmangarh constituency. Ever since then, he has held the seat for three consecutive times.

Who is Swapna Suresh?

Suresh’s alleged role in the gold smuggling racket and her connections to former principal secretary M Sivasankar, under whom she worked as a contract staff with the state government’s flagship Space Park project, has snowballed into a major controversy in Kerala.

At Bombay, Gokhale opposed the British government’s onerous land revenue policies, advocated free and compulsory primary education, and asked for the creation of equal opportunities to fight against untouchability.

Who is Kanika Kapoor

The Mumbai-based 41-year-old singer tested positive for novel coronavirus after her return from London. Former Rajasthan chief minister Vasundhara Raje confirmed that she and her MP son Dushyant Singh are in self-quarantine after they attended a dinner where the singer was also present.

Jyotiraditya Scindia: The Gwalior royal at the centre of turmoil in Madhya Pradesh

Sources said Jyotiraditya Scindia resigned from the Congress over tussle for two Rajya Sabha seats in the state, and the post of the state Congress chief, which is currently held by Nath. He is expected to join the BJP later on Tuesday.

Who is Rana Kapoor?

Who is S N Shrivastava, the new Delhi Police Commissioner?

Shrivastava is a 1985-batch AGMUT cadre officer who was repatriated to the Delhi Police from the Central Reserve Police Force (CRPF).

Who was RK Pachauri?

Pachauri was chairperson of the Intergovernmental Panel on Climate Change when it shared the Nobel Peace Prize with Al Gore in 2007. His legacy as a leading voice in environmentalism was marred by a sexual harassment charge leveled by a junior colleague in 2015.

Senior Supreme Court lawyer and former Attorney General of India K Parasaran successfully fought the Ayodhya land dispute case for the Hindu parties and has been named as a trustee in the Ram Janmabhoomi Teerth Kshetra Trust.

Who is Pete Buttigieg, the first openly gay candidate to run for US President

Pete Buttigieg, was born in South Bend, Indiana, a city of just 100,000 people. Buttigieg served as mayor of the city for two terms.

Arap Moi introduced a constitutional amendment 1982 where he essentially made the country a single-party state.