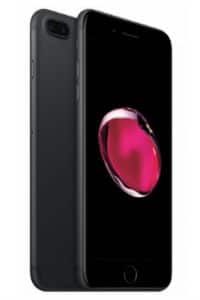 Apple iPhone 7 Plus was launched in September 2016. Apple iPhone 7 Plus features a 5.5 inch-IPS, LED-backlit widescreen, Multi-Touch display with a 1920 x 1080-pixel resolution(401 ppi) and a Taptic engine. iPhone 7 Plus comes with 3GB RAM, and storage variants of 32GB, 128GB, and 256GB storage. This phone is powered by the A10 Fusion quad-core processor from Apple, and runs the iOS 10 OS.

Apple iPhone 7 Plus sports a dual rear camera with 12MP + 12MP camera, where one has a regular telephoto lens (roughly 28mm) and the other has wide-angle lens which is equivalent to a 56mm lens. The aperture on the telephoto is f/1.8, while the wide-angle lens has f/2.8 apeture, and comes with OIS, and Quad-LED True Tone flash. Apple has also added a Sapphire crystal lens cover on the back for extra protection. The rear camera has a portrait mode, which allows for bokeh-style pictures, where the background is blurred to create an illusion of a wider-depth of field.