10 traditional sweets from across India: Kharvas to Til Pitha, Ghevar to Unnakai 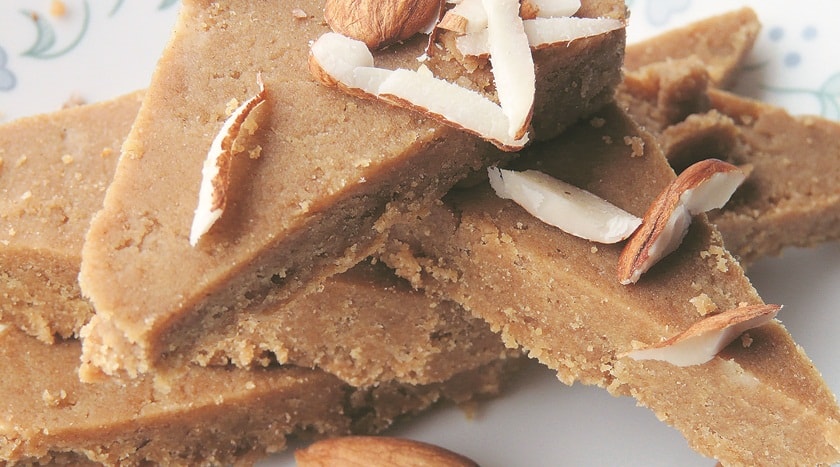 At the seat of Ghantakarna Mahavir, a Jain temple in Mahudi, Gujarat, the prasad offered is unlike any other . The sweet, known as sukhdi, is served on huge trays as a single helping. Devotees are expected to finish the entire tray on the temple premises because taking the prasad outside is said to bring bad luck. Accidents, devotees whisper, have been known to happen even if one steps out with a single piece of the ghee-laden, crumbly sweet.

Delicious as Mahudi’s sukhdi is, it is easy to resist the temptation to pocket a few of the diamond-shaped pieces. This is because the sweet, also known as gol papdi, is found in most Gujarati homes. Shrikhand and basundi mark special occasions and kansar is made for weddings, but for a sweet that comforts even as it satiates, most Gujaratis turn to sukhdi.

“Sukhdi is something that can be made even for a last-minute sweet craving,” says 64-year-old Harshida Mehta. “In its most basic form, which is nonetheless delicious, it is made of three ingredients that most Gujarati kitchens will have: ghee, jaggery and wheat flour.” Mehta, a retiree who lives in Mumbai, usually makes a dish or two of sukhdi a week to cope with her family’s emergency sweet cravings. Wheat flour is roasted in a generous amount of ghee and plenty of jaggery shavings are added right at the end. The result is a dessert that is buttery and sweet. Sukhdi also stays for long, even when stored at room temperature. For Mehta, as a child, travel food usually meant a packet of homemade theplas and sukhdi. Children are fed a piece or two of sukhdi every morning because it is believed to make them stronger. The sweet is also used as a carrier for medicinal ingredients such as sonth (dried ginger), ganthoda (peppermaul) and dry fruits such as almonds and walnuts, particularly in winter.