Today, Adityanath, just 49, is the most-talked-about CM in the country, one of the BJP's prime campaigners beyond UP, and a leader who has risen above the party in the state to cast it in his image. 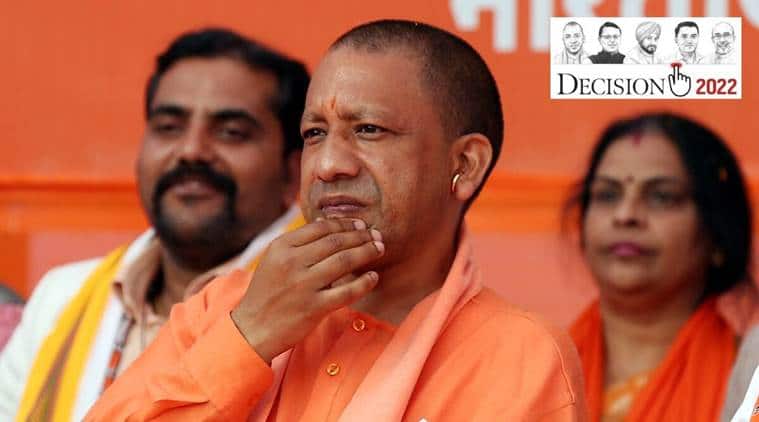 Yogi is the successor of Mahant Avaidyanath at Goraksh Peeth. He has been a five-time MP from Gorakhpur.

In his speech after wrapping up the mandate, Adityanath also underscored the key theme behind his party’s repeat win. “The BJP’s double engine government, in the past five years, created an atmosphere of security and gave respect to faith,” he said.

It was also a tumultuous reign marked by controversial encounter deaths, the anti-conversion law, the so-called anti-romeo squads, the Hathras rape and killing, and the landmark Ayodhya verdict.

But on Thursday, Adityanath accused the Opposition of fanning “conspiracies” and “fake propaganda”, and was clear about what pulled him through: “UP public’s blessings for the model of nationalism, development and good governance.”

“And we accept their blessings,” he said. “We will have to take forward the mantra of sabka saath, sabka vikas, sabka vishwas and sabka prayas.”

Thanking Prime Minister Narendra Modi, Adityanath said that UP’s voters rejected the Opposition’s politics of “casteism, dynasty and nepotism”. “Once again, we need to continue with the issues of nationalism, security, development and good governance, which made the people give us this huge mandate and it is our responsibility to meet the expectations of people…BJP is going to create history in UP,” he said.

In 2017, the BJP had won 312 seats on its own, with Adityanath emerging as a surprise pick to lead the government. This time, it fell well short of that number with 254 seats of its own, including three where the party was leading late on Thursday, in the 403-member Assembly.

Explained |A look at the politics of Uttar Pradesh, over the years

Click to register and attend the Explained session https://bit.ly/35GN0eK

But it still managed to short-circuit the “social engineering” of Samajwadi Party (SP), which had tied up with smaller outfits in a bid to add non-Yadav OBCs to its traditional base of Yadav and Muslim voters. So much so that the BJP’s vote share increased from 39.67 per cent in 2017 to 41.3 per cent.

As Adityanath stressed after the win, the one factor that dominated the BJP’s campaign and worked in its favour was the issue of law and order with voters acknowledging a sense of “suraksha” (safety) under its rule when compared to the previous SP regime.

The masterstroke, however, was the distribution of free ration to the poor, which helped the party dent the Dalit vote bank of the BSP and undercut the SP’s outreach to OBCs.

Another Central scheme — PM Kisan Samman Nidhi — helped rebuild trust among farmers despite the year-long agitation against the farm laws and the Lakhimpur Kheri incident in which Union MoS Ajay Mishra’s son was accused in the killing of four farmers and a journalist. The SP’s promise of financial help for each farmer killed during the anti-farm protests did not work.

The state government also worked on mega infrastructure projects, including expressways and medical colleges, even as the ruling party carried forward its ideology of Hindutva. Adityanath celebrated Deepotsav on a grand scale in “new Ayodhya”, and gave the temple town a number of major infrastructure projects. What also helped was Modi laying the foundation stone of the Ram temple in 2020 and completing the expansion of the Kashi Vishwanath corridor in Varanasi.

The BJP’s organisational work on the ground played a crucial role, too. The party started a door-to-door outreach amid Covid curbs even as Opposition parties stayed back. Over the past six months, the BJP’s top leaders, including Adityanath and senior ministers, toured various Assembly seats to inaugurate development projects and lay the foundation of infrastructural initiatives.

Apart from setting up election coordination committees in each seat, the party also organised sammelans for representatives of various communities in an outreach to OBCs and SCs.

With a three-layer organisational structure, the party got its Union ministers and Central leaders to cover all constituencies. In fact, before the announcement of polls, Adityanath himself visited at least 250 constituencies, including over 40 in a couple of months. Taken together, party leaders addressed over 399 public meetings, nukkad sabhas and road shows during its six “Jan Vishwas” yatras from December 19, 2021, till early January this year. The party also developed its own network system to hold virtual rallies for a maximum of 50,000 people at a time.

On Thursday, as the results reinforced the effort, Adityanath played holi with other party leaders and workers at the BJP office in Lucknow. “Humein josh ke saath-saath hosh ko banaye rakhna hai (We must show passion while retaining our senses),” he said.

Rahul Gandhi relishes falooda ahead of election results; enjoys a game of badminton