A large section of CPM’s voters had shifted their allegiance to the saffron camp ahead of the 2019 Lok Sabha polls, thereby helping the BJP win 18 of the 42 seats in the state. 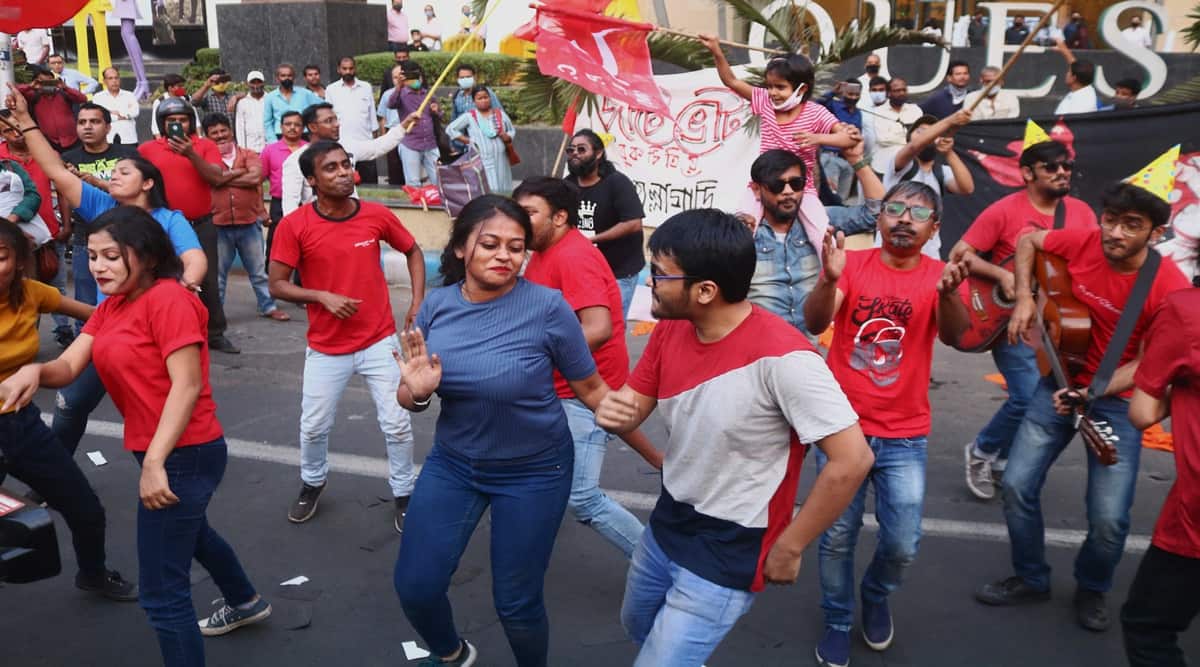 Members and supporters of the Left parties organise a street play in Kolkata on Thursday. (Express Photo: Shashi Ghosh)

With the Assembly elections knocking on the door, West Bengal Chief Minister Mamata Banerjee has been going all out to woo supporters of the Left parties as the TMC faces stiff competition from the BJP this year.

Wary of the Congress-Left-ISF grand alliance cutting into the votes of the Trinamool Congress, Mamata, while releasing her party’s manifesto, had said, “Those who really want to defeat the BJP, please vote for us. Do not waste your vote by going and casting it for the Left.” The TMC supremo was also recently seen praising CPI-M (Liberation) general secretary Dipankar Bhattacharya for criticising the saffron camp.

“The Congress-Left-ISF’s alliance may not win seats but they will surely cut into the Trinamool’s vote share. With Abbas Siddiqui’s ISF coming into the picture, the Muslim votebank may also split and thereby hand the victory to the BJP. It is because of this that we have been asking the supporters of the Left parties to not split your votes as ultimately, the BJP will be the ones benefiting from it. We are the only ones who can stop the BJP,” a senior Trinamool leader, who did not wish to be named, said.

Although the CPM has not been able to pose a considerable threat to the TMC since the latter came to power in 2011, a large portion of CPM’s voters had shifted their allegiance to the saffron camp ahead of the 2019 Lok Sabha polls, thereby helping the BJP win 18 of the 42 seats in the state.

Members of the CPM politburo, however, refused to comment on this. “Nobody gives any importance to statements made by Mamata Banerjee and her party’s leaders. We have been asking people to vote for us because both the BJP and TMC are not bothered about the problems of people and we are the only ones who can address the issues,” politburo member Md Selim said.

Meanwhile, several organisations have taken to the streets of Kolkata to campaign against the BJP. Raising the slogan “No Votes to BJP”, these organisations say their main agenda is to inform people about the saffron party’s divisive politics. They, however, do not advocate who to vote for and ask people to choose the best candidate in their respective constituencies, barring the ones representing the saffron camp.

However, CPM leaders believe these organisations will ultimately help the TMC. “In 2011 too, such organisations had helped Mamata Banerjee. She uses them to fool people. I would request the voters not to be swayed by such propaganda,” a senior CPM leader said.

England fined for slow over-rate in fourth T20I against India