Not a single voter out of the 3,344 in three polling booths of Bhangor village in Jamnagar Lok Sabha constituency exercised their franchise on Tuesday. They were disappointed by the low payout of crop insurance for their groundnut crop. 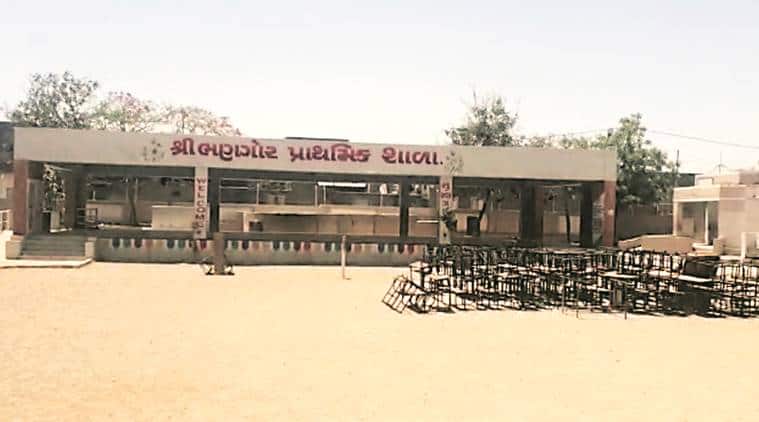 A deserted polling booth at Bhangor village in Jamnagar

Even as 63.67 per cent of the electorate of the state turned out to vote on Tuesday, a few villages in Jamnagar, Kutch and Tapi districts that have been hit by drought, boycotted the polls over low payout of crop insurance for their failed crop, and inadequate provision of water supply, among other reasons.

Not a single voter out of the 3,344 in three polling booths of Bhangor village in Jamnagar Lok Sabha constituency exercised their franchise on Tuesday. They were disappointed by the low payout of crop insurance for their groundnut crop.

Read | Vadodara’s displaced queue up, only to find their names missing

Collector of the district and returning officer for Jamnagar Lok Sabha constituency Ravi Shankar said they tried their best to convince the villagers to vote. “We sent our taluka vikas adhikari, some senior officers and also the superintendent of police (to convince voters),” said Ravi Shankar. “We also tried to persuade them that we had no role in awarding them compensation and that it was a private agreement between them and the insurance company. But they did not relent.”

Bhangor is located in Bhanvad taluka. Villagers said their claims for insurance payout for the failed groundnut crop had been settled based on the assessment that their yield had been only 17 per cent less due to the deficient monsoon. They argued that, in a neighbouring village, the crop loss was assessed to be 76 per cent.

In Tapi district, three villages in Songadh taluka, which fall under the Bardoli Lok Sabha constituency, villagers boycotted polls because they had been denied basic facilities such as water supply, healthcare, education, roads and power supply. The three villages are Budhwada, old Amalpada, and Old Kuilivel, which have 1,200 voters, said election officials. The villagers had in fact announced a couple of days ago that they would not vote. On learning of the boycott, election department officials visited the villages and requested the voters to exercise their franchise. The officials also explained that if they did not want to vote for any of the political parties or candidates, they could press the NOTA (none of the above) button. Tapi district collector R S Ninama said, “We made all possible efforts…but they refused (to accede).”

Nanda village of Kutch district was another that almost entirely boycotted polling. The village in the little Rann of Kutch, around 50 km east of Rapar, has 549 registered voters but only one of them cast his vote. “The villagers said the government was not supplying them with drinking water, and therefore they would not vote,” said a police officer of Kutch.

Incidentally, Kutch is going through one of its worst droughts in recent years.

As a result of drought, even voter turnout in Kutch has been affected, say politicians and community leaders, who blamed it on migration of cattle-herders (maldharis) from the parched district in search of water and fodder.

The Parliamentary constituency recorded an estimated 57.53 per cent voting, 6.14 per cent less than the state average of 63.67 per cent.

“Approximately. 20,000 maldhari voters have either migrated out of Kutch or within district due to drought,” said Yajuvendrasinh Jadeja, president of Kutch district unit of Congress. “There is severe shortage of water, especially in areas like Banni grassland in Bhuj taluka, Abdadasa, Lakhpat and so on, and this has somewhat reflected in the comparatively low turnout.”

Valamji Humbal, chairman of the Kutch District Cooperative Milk Producers’ Union Limited, popularly called Sarhad Dairy, also estimated similar migration figures. “According to our estimates, around 10,000 to 15,000 maldharis are away,” said Humbal, adding that it had affected their milk collection too. “Our milk collection has gone down by more than 23 per cent. We are collecting an average three lakh litre of milk a day compared to around four lakh litre last year,” said Humble.

Kutch Unt Uccherak Maldhari Sanghathan, an organisation of camel breeders of Kutch district, said around 250 families had migrated out of Kutch. “Camel-breeders and herdsmen are camping in districts like Ahmedabad and Bharuch in search of fodder and water,” said KUUMS president Bhikhabhai Rabari.

Kutch collector and returning officer of Kutch Parliamentary constituency Remya Mohan, however, said those who had migrated earlier had returned, and therefore the impact on voter turnout was low. “As many as 459 cattle camps – a historic figure – have been opened in Kutch. Lots of maldharis who moved out before opening of cattle camps have returned,” she said.

Mohan cited the distribution of voter slips as evidence. “In Abdasa Assembly constituency, which has Lakhpat taluka, the most severely affected in terms of low rainfall, only around 1,600 voter slips were left undistributed,” she said. “Out of approximately three lakh voters, 1,600 is a small figure.”

Keshubhai Patel, president of Kutch district unit of BJP, also echoed the collector’s words. “Migration from Kutch happened early on. But the state government opened grass depots in August itself and then set up cattle camps,” he said. “Therefore, there was reverse migration. And only men migrate with their cattle, while women stay back at home.”

The maldharis themselves said the same, that it was difficult for the men to vote as they were far away from their polling booths but that the women of the family had voted. “The village sarpanch rang me up asking me to go and vote. But it is quite a distance from Bhachau to my native village of Sargu in Banni,” said Sanaullah Node, a 27-year-old cattle-herder. “I have to return to return from Bhachau to Sanand where I have kept my 30 buffaloes once I complete a deal in Bhachau to purchase fodder. Therefore, I could not vote.”

Node had migrated to Sanand in Ahmedabad district in September over fodder and water shortage in the Banni grassland due to scanty monsoon rainfall. “For the initial four months, I maintained my herd of buffaloes by grazing. For the past two months, a Dholka-based NGO has been helping us with a truckload of fodder every alternate day,” Node said. Along with him, 35 other maldharis, who are natives of Sargu and Ludiya village in Banni, are camping in Sanand with their 445 buffaloes.

However, Node said that his mother and four sisters had stayed back in Sargu and that they had all cast their votes on Tuesday. Sources said that the village recorded around 51 per cent turnout.

— With inputs from ENS, Surat

Vadodara’s displaced queue up, only to find their names missing