The poll officer in Bhopal has sought a response from Thakur who was banned from holding any public meetings, rallies, processions, road shows and interviews for 72 hours, starting 6 am on Thursday. 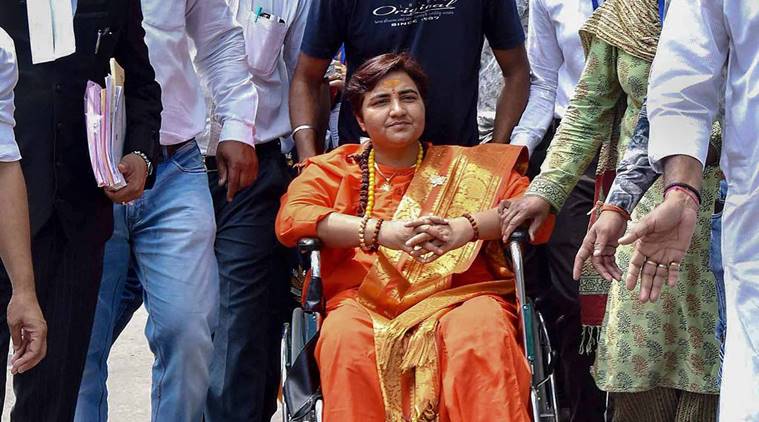 The Bhopal district election officer has issued a notice to 2008 Malegaon blasts accused Sadhvi Pragya Thakur over a complaint that the BJP candidate continued to campaign despite a three-day ban by the Election Commission for her remark on the Babri Masjid Demolition, news agency ANI reported.

The poll officer in Bhopal has sought a response from Thakur who was banned from holding any public meetings, rallies, processions, road shows and interviews for 72 hours, starting 6 am on Thursday.

Thakur, had, in an interview to TV9 on April 20, bragged about climbing atop the Babri Masjid in 1992 to demolish it.

In the interview, Thakur had said, “Ram Mandir hum banayenge, evam bhavya banayenge. Hum todne gaye the dhancha, maine chadh kar toda tha dhancha iss par mujhe garv hai. Mujhe Ishwar ne shakti di thi humne desh ka kalank mitaya hai.” “(We will build Ram temple and build a grand one. We had gone to demolish the structure, I am proud that I climbed the structure and demolished it. God gave me power and we removed a blot on the nation).”

Besides being barred from campaigning, an FIR was also filed by the Madhya Pradesh police under Section 188 (disobedience to order duly promulgated by public servant) of the IPC against the BJP leader.

Although Thakur, in her reply to EC’s showcause notice, had claimed that she did not make the comment with the intention to invoke religious sentiments and that the remark was merely an expression of her “inner voice”, the Commission ruled that her utterance was “provocative” and a clear violation of the Model Code of Conduct, that prohibits candidates from making communally divisive statements.

Hopeful that gathbandhan votes will go to Congress in Amethi, Rae Bareli: Mayawati