Rajasthan Assembly Election Results 2018: The Congress secured a majority of 99 seats in the state, followed by BJP which won 73 seats. A minimum 101 seats is needed to form a government in the House of 200 in the desert state.

Rajasthan Vidhan Sabha Election Results 2018: The final results for Rajasthan Assembly elections were declared late Tuesday night. The Congress secured a majority of 99 seats in the state, followed by BJP which won 73 seats. A minimum 101 seats is needed to form a government in the House of 200 in the desert state. The CPI(M) which drew blank in the last election, won 2 seats in the state this year.

Rajasthan Chief Minister Vasundhara Raje on Tuesday night handed over her resignation to Governor Kalyan Singh in Jaipur. Even though the outgoing chief minister who is usually known as  ‘Maharani’ won her seat Jhalrapatan with a handsome margin, her party headed for a loss to the Congress.

Final results for Rajasthan: Cong secures a maximum of 99 seats

Rajasthan Congress general secretary Sushil Sharma: We have given a letter to the Governor & have sought an appointment tomorrow. A high level delegation will meet him tomorrow, he has given us the appointment of 7 pm tomorrow. #RajasthanElections pic.twitter.com/Ry2kNiMFXN

Several rebel Congress candidates who won as Independents in the Rajasthan Assembly polls may help the party to form the next government in the desert state. Though the Rahul Gandhi-led party is surging ahead, it may still need support and a post-poll alliance if it fails to win the mandatory 100 seats, to form the government.

As of now, Congress has won 96 seats and is leading on 3 seats, taking its probable tally to 99 out of the 199 seats which went to polls.

The Bharatiya Janata Party (BJP) has so far won 71 seats and is leading on two seats, while 11 independents have won and two are leading. Six BSP, two CPM and six other party candidates have also won the elections.

We accept the people’s mandate with humility: Narendra Modi

We accept the people’s mandate with humility.

I thank the people of Chhattisgarh, Madhya Pradesh and Rajasthan for giving us the opportunity to serve these states. The BJP Governments in these states worked tirelessly for the welfare of the people.

Trends as of now: Congress leading with 99 seats

According to latest trends, Congress won 85 seats and is leading in 14 constituencies bringing the tally to 99. The Congress needs at least 101 seats to form a government. 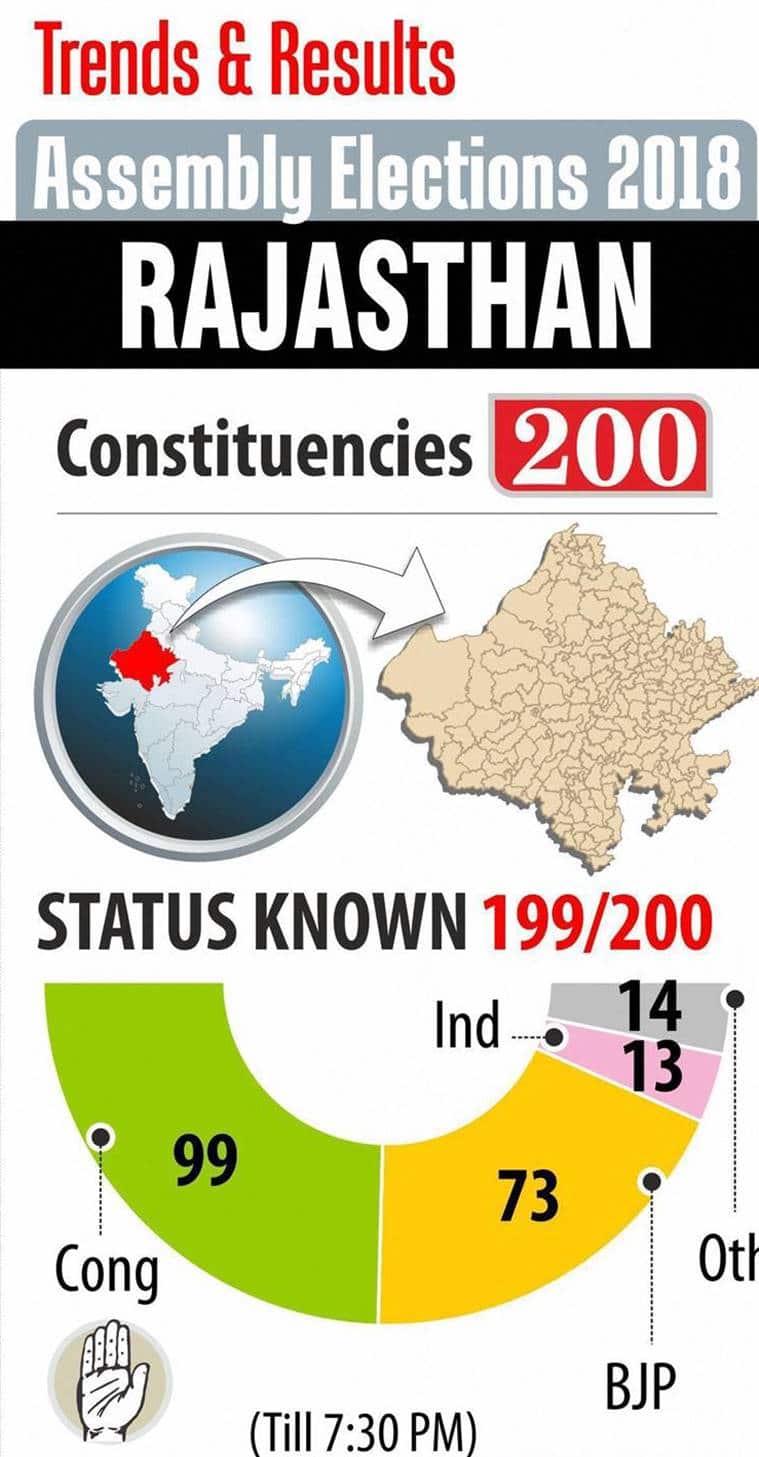 Vasundhara Raje resigns, says 'will continue to fight for people'

Addressing a press conference, outgoing Rajasthan Chief Minister Vasundhara Raje thanked everyone for supporting her so far. She also said that she will continue to fight for people and raise people's demand in the Vidhan Sabha.

"I would like to congratulate Congress. I accept this mandate by the people. BJP has worked a lot for them in these 5 years, I hope the next party takes those policies and works forward," Raje said.

As many as 13 of 19 ministers in the outgoing Vasundhara Raje government have lost the Assembly elections in Rajasthan as results and trends brought electoral reverses for the ruling BJP.

PHED Minister Surendra Goyal (Jaitaran) and Devsthan Minister Rajkumar Rinwa (Ratangarh) had turned rebel after the BJP denied them ticket and they contested the elections as Independents. Both have lost their respective seats.

Odisha: Voting underway in bypoll to Brajrajnagar Assembly segment
All in yellow, Bhagat Singh village awaits ascension of Bhagwant Mann as CM
Sawant to meet PM, Shah, Nadda today over govt formation in Goa
BJP to decide on Uttarakhand CM after Holi
After Punjab, AAP all set to venture into Haryana
More from Elections >>
Congress takes away both Jaisalmer, Jhunjhunu

We are going to provide states a govt they can be proud of: Rahul Gandhi

Adressing a press conference in Delhi, Congress Chief Rahul Gandhi said, " this is a victory of Congress workers, small traders, farmers. This is a big responsibility for Congress party and we will work on this. 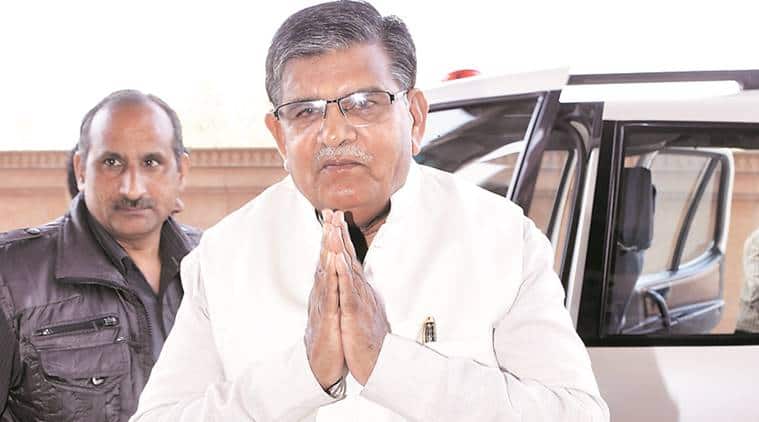 Meanwhile, in Telangana,  K Chandrashekhar Rao’s Telangana Rashtra Samithi (TRS) has swept the state. For the BJP, more than losing the election, the fact that these numbers put its dream to enter southern India on hold should be of greater concern.

Congress president Rahul Gandhi will take the final call Wednesday on who will be the chief minister in Rajasthan after taking in account the opinion of the newly elected MLAs, a senior party leader said.

"Congress legislature party (CLP) meeting will be held at 11 am on Wednesday in which the elected MLAs of the party will pass a resolution. The observer will seek individual opinion of the MLAs," AICC general secretary Avinash Pande said.

Rajasthan: Ashok Gehlot, Sachin Pilot and Congress leaders in Jaipur. Congress party has won 64 seats in the state and is leading on 34 seats so far. 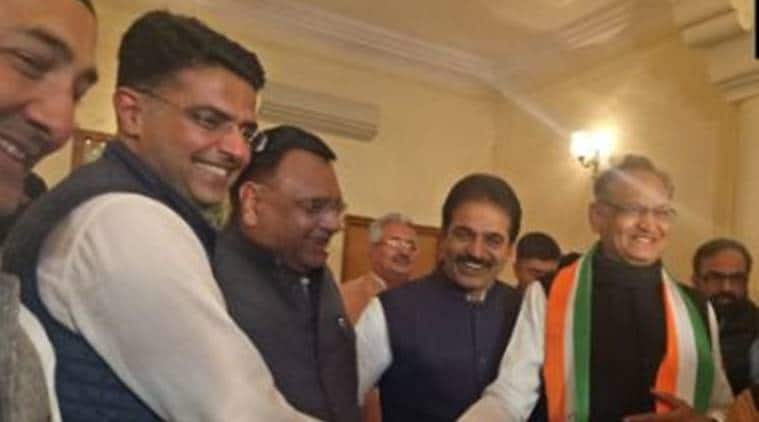 Even though Vasundhara Raje who is usually called 'Maharani' won her seat Jhalrapatan with a handsome margin but her party appeared headed for a loss to the Congress on Tuesday. As results came in and her party's defeat seemed imminent, she visited the BJP headquarters in Delhi but did not make a comment. This was her second term as chief minister and, in keeping with the tradition of voters choosing the Congress and the BJP alternately, the ruling party looks set to lose power.

Raje, the daughter of Jivaji Rao Scindia, the last reigning Maharaja of Gwalior, and Vijayaraje Scindia, a prominent BJP leader, ruled Rajasthan as chief minister from 2003-2008 and from 2013-2018 and was leader of opposition from 2008 to 2013.

After drawing a blank in the last election in Rajasthan, the CPI(M) is all set to win two seats, both of which were held by the BJP. The Left party's Balwan Poonia is leading with 73,725 votes in Bhadra constituency of Hanumangarh district. His nearest rival is BJP's Sanjeev Kumar. In Shree Dungargarh constituency of Bikaner district, the CPI(M)'s Giridharilal Mahiya is leading with 72,361 votes.

In the 2013 elections, the CPI(M) or the Communist Party of India (Marxist) had failed to win any seat. It won three in 2008 elections.

The CPI(M)'s Rajasthan in-charge Hannan Mollah said the trend of election results in the three Hindi-heartland states has ended the myth of the BJP's invincibility.

Congress is likely to go for a post-poll alliance in Rajasthan: Ashok Gehlot

The Congress is likely to go for a post-poll alliance in Rajasthan, where it is approaching towards a majority mark, former chief minister Ashok Gehlot said on Tuesday.  Gehlot indicated towards assembling an alliance by taking along willing parties and the candidates who have parted ways with the BJP. The Congress has contested the assembly elections with a pre-poll alliance on a total of five seats -- Mundawar and Kushalgarh (with Loktantrik Janta Dal (LJD); Bharatpur and Malpura (with Rashtriya Lok Dal (RLD); and Bali (with NCP). 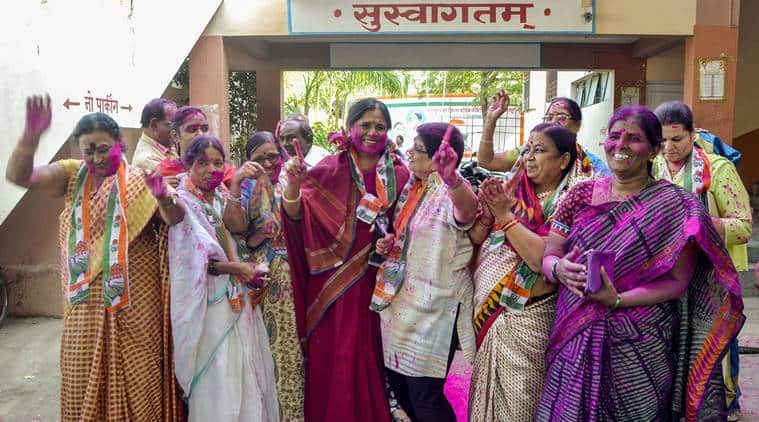 Rajasthan Assembly elections 2018 LIVE results: Most of the exit polls predicted a comfortable win for Congress in Rajasthan with the grand old party marching towards a majority mark. The BJP is battling strong anti-incumbency in Rajasthan, a state that has not voted the ruling party for a second term in the last 20 years.

The elections are crucial for the Congress party as well as it seeks to leave behind a series of defeats since the 2014 Lok Sabha elections when the BJP rose to power at the Centre. If the Congress wins the state polls, as exit polls were predicting on Friday evening, Ashok Gehlot is tipped for the chief minister's post. So is state party chief Sachin Pilot. Before the media on Friday, both sidestepped queries on who among them will end up with the responsibility, but predicted a party victory.