Elections 2019 updates: Rahul Gandhi addressed a public meet in Nagpur today where he said that unlike PM Modi he did not believe in lying and that he was in politics for the long haul.

Elections 2019 updates: Reckoned as one of the safest constituencies for the party, Congress believes that “nothing will work against Rahul Gandhi” in Wayanad.

Campaigning for the Congress in Maharashtra, party chief Rahul Gandhi addressed a public rally at Nagpur’s Kasturchand Park today. Gandhi told the crowd that unlike Prime Minister Narendra Modi he did not believe in lying as lies get caught. He also said that he was not in a hurry and that he is in politics for the long haul. “I want to build a long-standing relationship with you. I will not speak lies. Modi has grown old and is in a hurry. So he is telling lies,” Gandhi was quoted as saying by PTI.

Earlier, Gandhi filed his nomination for Lok Sabha polls from Kerala’s Wayanad district. He was accompanied by sister Priyanka Gandhi, and other state leaders, he also held a roadshow in the city.

Addressing the press after filing his nomination, Rahul Gandhi said, “I know the Congress and the CPM are locked in a fight in Kerala. This fight will go on. I understand that my brothers and sisters in CPM will fight me, attack me, but I will never say a word against them in my campaign. My motto is to send a message of unity and peace in South India.”

During the roadshow, Gandhi and Priyanka waved to the crowd. As the vehicle inched forward, Gandhi was seen shaking hands with many elated supporters. Senior Congress leaders including former Chief Minister Oommen Chandy and Leader of Opposition in the Kerala Assembly Ramesh Chennithala also took part in the procession.

Congress chief Rahul Gandhi filed his nomination from Kerala's Wayanad today. With sister Priyanka on his side, Rahul also held a roadshow earlier in the day. Follow LIVE updates in Malayalam

Sonia Gandhi to file nomination from Raebareli on April 11 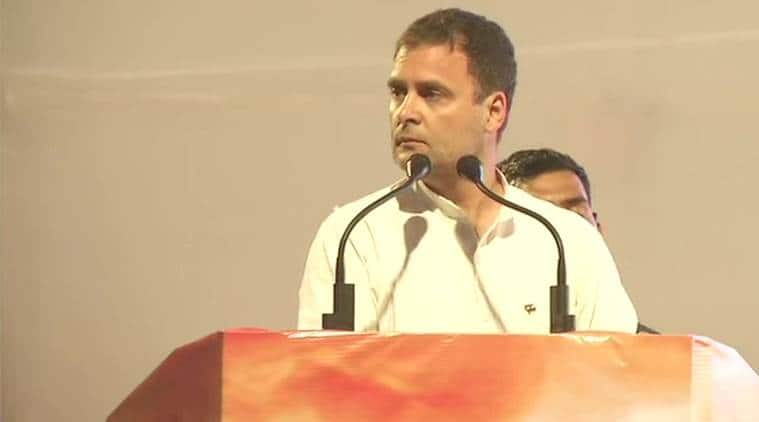 "Corruption, unemployment and farmers' problems are the priority issues for elections this time, and PM Modi should explain what he has done to tackle them in the last five years," said Gandhi. (PTI)

Congress is about to do a surgical strike on poverty: Rahul Gandhi in Nagpur

Congress President Rahul Gandhi in Nagpur: Congress party is about to do a surgical strike on poverty, Narendra Modi ji had promised Rs 15 lakh. Rs 72,000 annually implies, Rs 3,60,000 in 5 years. No matter what, I don't care, my aim is clear. #Maharashtra pic.twitter.com/02r1SinwSI

BJP chief Amit Shah cancelled his visit to Telangana which was scheduled today. Shah had to attend an "emergency meeting" on the party's manifesto and poll-related issues, a PTI report quoted top party leader as saying. The Prime Minister, Amit Shah and other leaders held an emergency meeting this morning and discussed manifesto and other issues, party general secretary P Muralidhar Rao said. "Due to delay there, he could not come," Rao told PTI. Lok Sabha polls would be held in Telangana on April 11.

Congress president Rahul Gandhi during a poll rally in Nagpur said that the ambitious 'Nyay' scheme was finalised only after consulting experts. The Congress, in their manifesto, said if voted to power, guarantees to deposit Rs 72,000 annually under the scheme to poor Indian families. "'Nyay' minimum income guarantee scheme to be "surgical strike" on poverty," he added. (PTI)

I am here for the long haul, I am not interested in telling lies like PM Modi. Lies get exposed; Congress wants to work, BJP just makes
hollow claims: Rahul Gandhi in Nagpur (PTI)

Rahul Gandhi thanks people of Wayanad for their 'love' and 'support'

I am overwhelmed by the love and affection of the people of Wayanad in Kerala, where I filed my nomination today for the Lok Sabha. Thank you for your support & warm welcome!

I also want to wish the journalists injured in a mishap during our road show a speedy recovery. pic.twitter.com/MLDAAdeNcc

Addressing a rally in Cooch Behar today, West Bengal Chief Minister Mamata Banerjee called Prime Minister Narendra Modi 'Chaiwallah, who failed to fulfil promises, and has now turned into a chowkidar to fool masses.' Taking a strong stance againt the NRC, she said that her party will never allow NRC in Bengal. " Modi is no one to decide who will stay and who will leave," she added. (PTI)

‘He won’t let you down’: Priyanka tells voters after Rahul Gandhi files nomination from Wayanad

After filing his nomination, Rahul Gandhi was accompanied by Priyanka on a roadshow through the lanes of Wayanad. The AICC chief, along with the state leaders including former chief minister Oommen Chandy and Leader of Opposition in the Kerala Assembly Ramesh Chennithala, came out in an open vehicle after the formalities were completed. The brother-sister duo shook hands with supporters and clicked pictures with them. Sharing a picture of the Congress chief at District Collector A R Ajayakumar’s office in Wayanad, Priyanka tweeted, “...Take care of him Wayanad. He won’t let you down'.

Rahul Gandhi files nomination from Wayanad, says will not speak a word against CPM

Wayanad is home to Kerala’s largest tribal population. Eighteen per cent of the district’s vote share is that of tribals. Rahul Gandhi is pitted against PP Suneer of the CPI and Thushar Vellappally of the NDA. Solar scam accused Saritha Nair will also take on the Congress chief. Claiming that there is a “cultural attack” by Prime Minister Narendra Modi, RSS and the government, Rahul said his motto of fighting from Wayanad is to “send a message that India is one.” Read more here

Take care of him Wayanad, he won't let you down: Priyanka Gandhi after Rahul's nomination

After Rahul Gandhi's nomination, Priyanka Gandhi tweeted a picture of him filing the papers, asking Wayanad to take care of him. "My brother, my truest friend, and by far the most courageous man I know. Take care of him Wayanad, he won't let you down," she wrote on Twitter.

My brother, my truest friend, and by far the most courageous man I know. Take care of him Wayanad, he wont let you down. pic.twitter.com/80CxHlP24T

Want to spread message of peace and unity in South India: Rahul Gandhi

Addressing the media after filing his nomination in Wayanad, Rahul Gandhi said that his motto is to "spread the message of peace and unity across South India. "I understand that CPM will fight me, attack me, but I will never say a word against them. My motto is to send a message of unity and peace across South India. There is a cultural attack against people, languages and ideologies in India. I needed to send a message that India is one country."

The Congress' show of strength has now come to an end. In the evening, Rahul will address a rally in Maharashtra

The heights to which Congress supporters would go to see their beloved leaders @RahulGandhi & @priyankagandhi. Scenes from Kalpetta. #Wayanad @IndianExpress @IeMalayalam pic.twitter.com/XVnTVFNcZi

Congress' show of strength in Wayanad

The AICC chief, along with the state leaders including former Chief Minister Oommen Chandy and Leader of Opposition in the Kerala Assembly Ramesh Chennithala, came out in an open vehicle after Gandhi completed the nomination procedures at the district collectorate As the vehicle inched forward, Gandhi was seen shaking hands with many elated supporters. People were seen clicking photos on their mobile phones and waving flags of the Congress party and its ally Indian Union Muslim League (IUML). 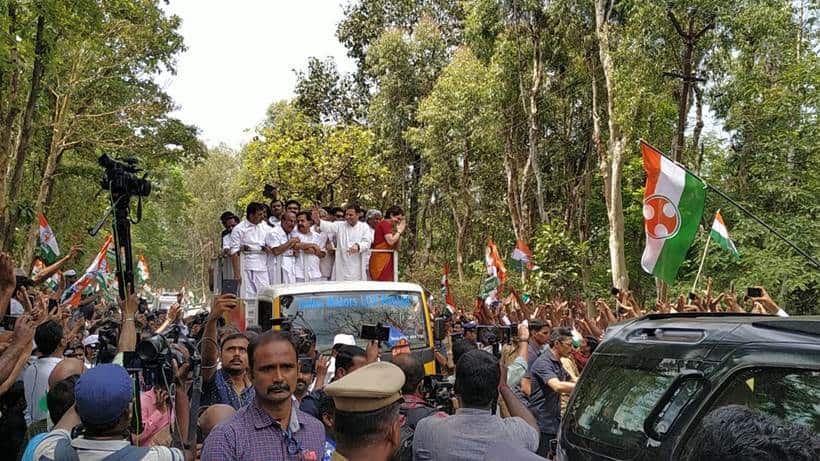 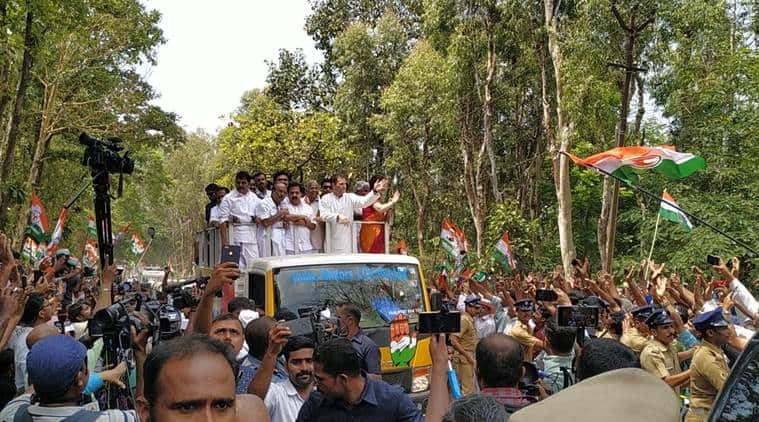 Rahul Gandhi filed documents to contest the Lok Sabha elections from Wayanad. He reached the District Collectorate's office after a roadshow with sister Priyanka Gandhi. A massive crowd of Congress workers and supporters carrying party flags greeted the brother-sister duo as they started their roadshow to mark the beginning of Rahul Gandhi's Wayanad campaign.

Rahul Gandhi has reached the District Collectorate office in Wayanad. He is accompanied by sister Priyanka Gandhi and senior Congress leaders. The Congress chief and his sister were greeted by a huge crowd here and he is scheduled to hold a roadshow before filing his papers. Rahul will also meet office bearers of the Congress and parties in the UDF later.

Rahul Gandhi in Wayanad: The Congress chief arrived in Kerala on Wednesday. He will file his nomination papers for the Lok Sabha Elections today.

Rahul’s decision, in line with the Gandhis looking South when in crisis, appears to be a bid to make a larger political statement — that, unlike his prime challenger, Narendra Modi, he is not confining himself to the North. Rahul is also contesting from Amethi, from where he has won thrice earlier. The BJP has again fielded Union minister Smriti Irani against him.

READ | All you need to know about Wayanad constituency

According to sources, the Congress had zeroed in on three seats for Rahul to contest from in the South — Wayanad, Kanyakumari in Tamil Nadu and Bangalore Rural in Karnataka. Wayanad is the safest best among the three.

Located in the tri-junction of Tamil Nadu, Karnataka and Kerala, Wayanad seat came into being in 2009 after the delimitation of constituencies. Won by the Congress twice since its inception, the seat is considered to be a safe turf for the party.