Lucknow roadshow Highlights: As supporters wait to hear Priyanka, Rahul does all the talking

Priyanka Gandhi Lucknow roadshow LIVE Updates: Monday witnessed Priyanka Gandhi’s first roadshow in Lucknow after her appointment as East Uttar Pradesh General Secretary. She was flanked by her brother and Congress chief Rahul Gandhi and West Uttar Pradesh General Secretary Jyotiraditya Scindia at the roadshow which marked her maiden visit to the state after being appointed last week.

After the roadshow, Rahul Gandhi addressed the crowd at Lucknow’s PCC office and urged people to topple the ruling BJP government in the state. Reiterating their agenda for the roadshow, he said that he has sent Priyanka and Jyotiraditya to UP to contest and win the assembly elections, apart from keeping a strong hold over the upcoming Lok Sabha elections as well. Priyanka and Rahul, accompanied by Raj Babbar and Scindia were seen waving at supporters atop the bus on which they covered roughly 25-km-long roadshow. Before arriving in Lucknow, she also made her Twitter debut.

Priyanka and Scindia will camp in Lucknow for the next four days, meeting leaders and party workers, while Rahul is likely to return today after the roadshow.

At Priyanka's first roadshow, Rahul does all the talking

Priyanka Gandhi remains mum after the roadshow, whereas her brother takes the centre stage and addresses the crowd at the PCC office in Lucknow.

Congress will fight in full power, with full resolution and to topple the present government in Uttar Pradesh: Gandhi

In conclusion to his speech, the Congress chief said, "The hollowness within Modi ji has been exposed in front of India, its youth, farmers and the common people. Congress has no shortage of issues, fight with them on these issues and see the changes Congress goes through in UP." He further added that Congress respects Mayawati and Akhilesh ji but we will fight with our best efforts in the state to change the politics in the state and fulfil the dreams of the youth in UP.

Urging people to shout slogans against Modi and raising farmers issue during the address, said, "Today people from Air Force and defence ministry say 'Chowkidaar chor hai'.  PM Modi ended the corruption clause to give Rs 30000 crore to Anil Ambani and loot people of India. 'Chowkidaar chor hai' is resonating throughout the country."

Rahul Gandhi addressed the gathering and says, "Priyanka and Scindia to raise ground level; workers to resurrect Congress in Uttar Pradesh while targetting assembly election. The entire team which stands here has the responsibility to ensure Congress govt is formed in the state. In UP, BJP should go out and Congress should be formed. "

Rahul Gandhi clears the agenda behind sending Priyanka, Jyotiraditya to UP

Rahul Gandhi lays down the agenda of today's roadshow during his address and says, "The aim behind sending Priyanka and Jyotiraditya to Uttar Pradesh is to form the government in the state apart from the upcoming Lok Sabha elections."

While aim is also Lok Sabha election but main aim behind sending Priyanka n Jyotiraditya to UP is to form the Government in Uttar Pradesh, says Rahul Gandhi. @IndianExpress

After her political debut which is marked by the 12-km long roadshow in Lucknow, Priyanka Gandhi is set to visit Jaipur today evening where her husband Robert Vadra is likely to depose before ED.  Vadra who is Congress President Rahul Gandhi’s brother-in-law is expected to make a fresh appearance before the Enforcement Directorate on Tuesday in Jaipur in connection with a probe into an alleged land scam in the Rajasthan’s border town of Bikaner, officials said Monday. Vadra’s mother Maureen is also likely to appear before the central probe agency at about 10 AM at its zonal office on Bhawani Singh Road in Jaipur Tuesday. Read more

Nation's 'chowkidaar' stole money from Uttar Pradesh, other states, & Air Force. 'Chowkidaar chor hai'. UP is the heart of the country. We'll play on front-foot. Scindia Ji, Priyanka Ji & I won't rest until a govt of Congress' ideology is formed here: Rahul Gandhi in Lucknow

Warcry in UP: Rahul Gandhi addresses gathering at the roadshow

Rahul Gandhi addresses a gathering at the roadshow in Lucknow alongside his sister Priyanka Gandhi who made her political debut today. During his address, he spoke to Congress workers and people who had come out on the roads and urged them to overturn the ruling government and bring Congress to power in UP. He concluded his speech by shouting, "Chowkidaar Chor hai",  in a jibe directed at Prime Minister Narendra Modi. Meanwhile, people are drawing parallels between Priyanka and her grandmother Indira Gandhi, thus questioning if she would prove to be a game changer for the party ahead of Lok Sabha elections.

WATCH: Video of Rahul and Priyanka Gandhi sitting on the bus to avoid mishaps with overhanging electrical wires

Video shows Priyanka, Rahul Gandhi and Jyotiraditya Scindia sit on top of the bus during the roadshow in order to avoid any mishap caused by overhanging electrical wires.

Meanwhile, Prime Minister Narendra Modi also makes his presence felt in Uttar Pradesh as he is accompanied by state Chief Minister Yogi Adityanath and Governor Ram Naik in Vrindavan where he is seen serving food to children after attending an event.

WATCH: Video of Rahul, Priyanka Gandhi and Jyotiraditya Scindia at the roadshow

Video of Priyanka Gandhi's roadshow in Uttar Pradesh which also showcases Uttar Pradesh West General secretary Jyotiraditya Scindia and Congress Chief Rahul Gandhi. Scindia and Priyanka are on a four-day visit in the state, starting off from Lucknow.

MP and Congress West UP Secretary Jyotiraditya Scindia is also accompanying Priyanka and Rahul Gandhi's roadshow in Uttar Pradesh. At the roadshow, Scindia took to Twitter to post a picture with a song as the caption.

PHOTOS: As Priyanka Gandhi made her political debut today, her brother Rahul Gandhi also joins the roadshow in Lucknow 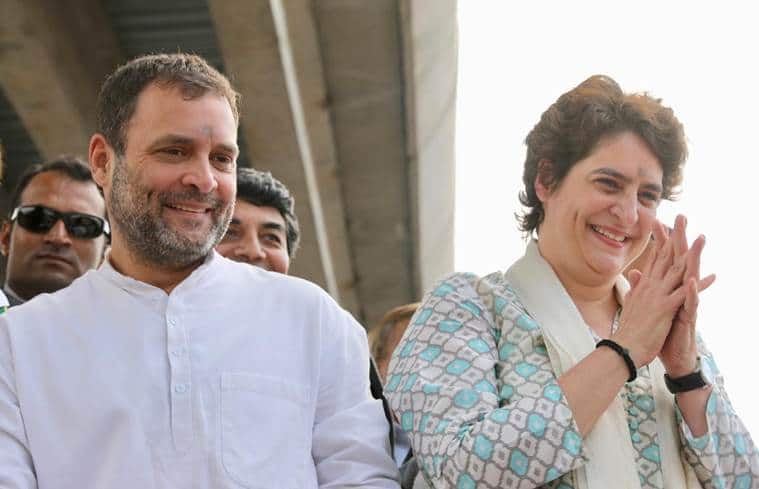 Priyanka Gandhi's husband Robert Vadra extended his best wishes to the Congress leader as she joins the "vindictive, vicious political atmosphere." Handing her responsiblity to the people of India, Vadra wrote: "You have been my best friend a perfect wife and the best mother to our Children. I know, it’s her duty to serve the people and Now we hand her to the people of India. Please keep her safe."Vadra is currently facing an ED probe over alleged money laundering.

Apart from Priyanka, Rahul and Scindia, also on the Congress' bus are leaders Jitin Prasad, RPN Singh and PL Punia among others. Also on the bus is former MLA Imran Masood. Masood had grabbed the headlines for allegedly threatening to “chop Narendra Modi into pieces” ahead of the 2014 Lok Sabha elections.

Congress President @RahulGandhi arrives in Lucknow along with AICC General Secretaries & Incharges UP East & West @priyankagandhi & @JM_Scindia for a road show across the city. #NayiUmeedNayaDesh pic.twitter.com/sR9DmIxGWr

Priyanka Gandhi Vadra along with brother and Congress chief Rahul Gandhi, party leader Jyotiraditya Scindia are expected to arrive at the Lucknow airport this morning. This will mark her first public appearance in the state after her new assignment.

Just like Priyanka Gandhi, a similar voice message was issued by Scindia as well, in which he said that the youth of the state want change and a road to the future, and urged the public to join his party in helping create the same.

“Priyanka and Scindia will be camping here for four days. Scindia has 38 constituencies under him while Priyanka ji has 42. She will be meeting leaders from each for about 45 minutes. They will go on field from February 18 to take opinion or leaders and interact with the public,” he added.