The Congress also extended support to the Rally.

"I want to say to the whole country that this time vote for a literate Prime Minister. Think about the country and not a single person," he added.

Instead of dreaming of becoming PM, Mamata should pay attention in Bengal: Dilip Ghosh

Meanwhile, the BJP's West Bengal unit Wednesday mocked Chief Minister Mamata Banerjee for joining the opposition rally describing it as a "desperate attempt to hog the limelight". These rallies show the "desperation" of the opposition parties to capture power at any cost, West Bengal BJP president Dilip Ghosh said.

"She (Banerjee) is busy going to Delhi attending dharna of opposition leaders. There are so many opposition leaders and everybody including Mamata Banerjee is fighting for the prime minister's post. Instead of dreaming of becoming the PM, she should pay attention to provide good governance in Bengal," Ghosh said.

All democratic institutions are under assault: Ram Gopal Yadav

Samajawadi party leader Ram Gopal Yadav said Uttar Pradesh will play a crucial role in 2019 and asserted BJP will not open its account in UP, which has 80 Lok Sabha seats. He said the SP-BSP-RLD alliance will "create a situation" in UP that Modi will have to find another seat, besides Varanasi, to contest the coming Lok Sabha election.

This Opposition, he said, will defend the country and save democracy from BJP.

"All democratic institutions are under assault," he alleged, adding, "We need to identify the elements, who, in partnership with BJP, are trying to weaken Kejriwal and Mamata governments."

Taking a jibe at Prime Minister Narendra Modi, Mamata said,   democracy has today become "Modicracy".  " Everyone is afraid of Gabbar Singh, there are two of them -- Modi and Shah," she said adding that the situation has become worse than emergency. 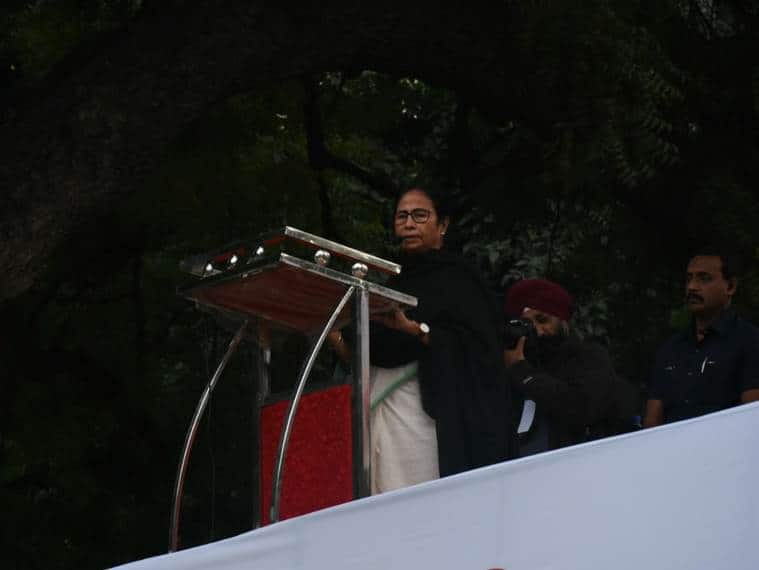 "Modi says, his govt gave you food, gas, and everything and what have we done? Nothing," asks Mamata.

Speaking at the rally hosted by Delhi's AAP, Mamta said, Aam Admi party will win all seven seats in Delhi and there will be a united India soon.

Today is the expiry date of Modi sarkar: Mamata Banerjee

Speaking at the Opposition rally  in Delhi,  West Bengal Chief Minister Mamata Banerjee said the expiry date of  Modi Sarkar is over as today is the last day of parliament. This chowkidar( PM Modi) needs to be removed to save the country: CPI(M) leader Sitaram Yechury

"There is need to replace this government for a better India. This chowkidar needs to be removed to save the country.

"BJP is like Kaurava Sena but the  Pandavas (Opposition) will defeat them and save the country," he said.

BJP in power is a threat to constitution and democracy: CPI leader D Raja

Speaking at the rally, CPI leader D Raja said the Constitution is under attack under Narendra Modi as prime minister and asserted that Parliament has been undermined and bypassed and its role has been minimized under Modi.

"Can you allow a Germany-like situation where Hitler overpowered Reichstag(German parliament)," he said.

"BJP in power is a threat to constitution and democracy. It must be defeated," he added.

BJP in power is a threat to constitution and democracy: CPI leader D Raja

Speaking at the rally, CPI leader D Raja said the Constitution is under attack under Narendra Modi as prime minister and asserted that Parliament has been undermined and bypassed and its role has been minimized under Modi.

"Can you allow a Germany-like situation where Hitler overpowered Reichstag(German parliament)," he said. "BJP in power is a threat to constitution and democracy. It must be defeated," he added.

Speaking at the Opposition rally in Delhi, Janta Dal Party leader Sharad Yadav said, "BJP made elections very exorbitant, that if Lal Bahadur Shastri and Jay Prakash Narayan will contest elections they won't be successful. Time has come to show them the doors. India needs to be saved." 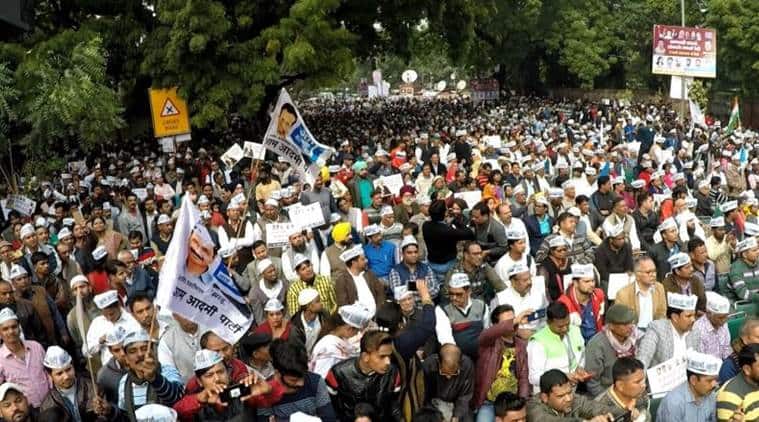 Sea of people at #JantarMantar to challenge the dictatorship of @narendramodi.

Almost one lakh people have joined the movement to #SaveIndianDemocracy pic.twitter.com/ZUrpCzjsbV

‘Mahagathbandhan’ getting stronger? Six times they shared stage before

As the Opposition leaders flock together today under the banner of “Remove Dictatorship, Save Country,” here are the other instances when they projected a united face over the past year. Read More

Mamata Banerjee has emerged as one of the most formidable voices of the opposition and her visit to Delhi assumes significance after the protest she led in Kolkata over CBI’s attempt to interrogate the city police chief in chit fund scam cases created a political storm. She has been at loggerheads with the ruling BJP, which is eyeing to garner at least 22 of 42 seats from Bengal in the upcoming Lok Sabha elections. Read More

Senior AAP leader Gopal Rai said, “All opposition leaders will attend this rally against the Modi government. It will be attended by all those who had attended Mamata Banerjee’s Kolkata rally last month.” As part of the 'India Against Corruption', Kejriwal had once called upon “Didi” to join the anti-corruption movement during the Congress-led UPA regime.

Bringing her fight against the BJP government to the national capital, Banerjee arrived in Delhi on Tuesday evening. Unlike Naidu, Banerjee may visit Parliament briefly on Wednesday morning before heading to the dharna site. It has been her practice for some time now to arrive in Delhi when Parliament is in session and spend some time both in the Trinamool Congress (TMC) office in Parliament and the Central Hall, where she likes to catch up with her old colleagues across parties.

The TMC chief, who has launched almost daily diatribes against Prime Minister Narendra Modi, is hoping to firm up her claim to be an Opposition fulcrum at the Jantar Mantar rally. Banerjee is likely to return to Kolkata on Thursday.