O Rajagopal: ‘Left seems to have a slight edge…People are afraid of associating with Congress, it’s a sinking ship’

"It will be a three-cornered fight. But the image of the Congress, both at the national level and at the state level, is weak," Rajagopal said. 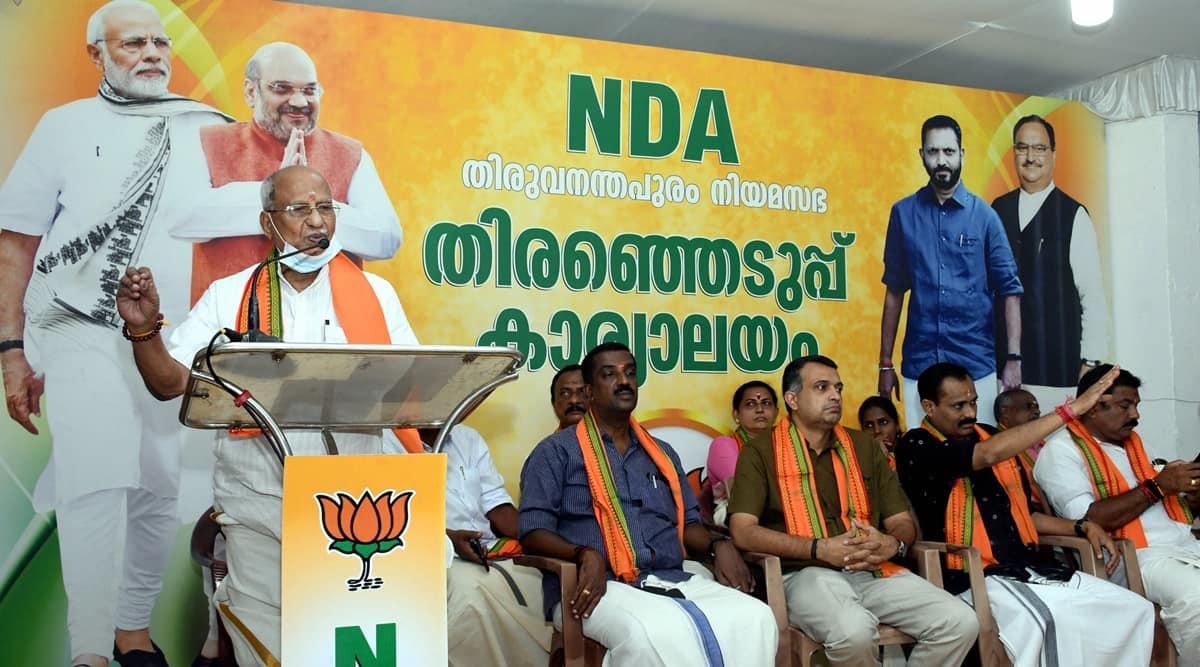 In 2016, the BJP opened its account in Kerala with your win in Nemom. How is the contest shaping up this time?

I am not contesting this time but I will be in the field campaigning. I am 93. My health doesn’t support me to function as an elected representative. That is why I decided to step aside and brought Kummanan (Rajasekharan) as the candidate. I will work to see that he wins. I hope we will be able to succeed.

The Congress is fielding former KPCC president and Lok Sabha MP K Muraleedharan. It will be a tight contest.

It will be a three-cornered fight. But the image of the Congress, both at the national level and at the state level, is weak. That is a fact. So Muraleedharan coming (to Nemom)… It doesn’t matter if his father (late Congress veteran K Karunakaran) was an astute politician… Karunakaran, of course, was an eminent leader. I have nothing personal against Muraleedharan…but the fact is that father is father and son is son.

There is resentment in the BJP over candidate selection.

It (resentment) is very less. As somebody has said…if a drop of ink falls on a soiled dhoti…nobody will pay attention…because it is already soiled. But if a drop of ink falls on a clean dhoti, it will stand out. The BJP’s case is like that. When it happens in the BJP…The fact is that it is very common in political parties… For seats there will be demand. Some cases may be genuine. Sometimes we will have to accommodate. There may be deserving candidates…but there are other factors…for instance at times there is a need to accommodate a Scheduled Caste candidate…so the other person may have a grouse, that I am better than him, I had worked for the party etc. That may all be right but (sometimes) adjustments are necessary.

R Balashankar, the former editor of the Organiser weekly, has alleged that there is a tacit understanding between the BJP and the CPM. He wanted to contest from Chengannur constituency. How do you see it?

He is not from Kerala. He is Delhi-based. He may have been born in Kerala but (he has) no other connection. You have to get people’s vote here.

That is not right (claim of tacit understanding). That is his wrong impression, his wrong understanding. He has misunderstood. He is part of the Sangh, he is a swayamsevak…but as I said some people may develop a grouse during candidate selection…that I am more deserving…but there are many factors at play during candidate selection… representation of women, Scheduled Castes, area-wise representation… I am not saying that those who are raising questions do not have a basis for it…but there is more justification on the other side.

State BJP president K Surendran is contesting from two seats – Manjeshwar in the North and another seat in the southern part of the state.

He lost very narrowly last time in Manjeshwar, just by 89 votes. So naturally he has a better chance of winning. With Konni (which was the epicentre of Sabarimala protest), because of the Sabarimala protests, he has an emotional relationship.

Why is the BJP not being able to find political space in Kerala? The party came from nowhere to capture power in Haryana and Tripura, and has become a major player in West Bengal in such a short span of time.

Kerala is a state with a difference. There are two-three distinguishing factors. There is 90 per cent literacy in Kerala. They are thinking, they are argumentative… These are habits of educated people. That is one issue. The second speciality is the state has 55 per cent Hindus and 45 per cent minorities. So that aspect comes into play into every calculation. That is why Kerala cannot be compared with any other state. The situation here is different. But we are steadily growing. Slow and steady.

It is not for political reasons. You should appreciate it if some good work is done. There should be honesty. Politics does not mean you have to lie, you should speak the truth. I won’t be able to say the same about (VS) Achuthanandan. Every person has some quality. He (Vijayan) has the ability to manage things. He is able, shrewd, talks little but he hits the target. He has certain qualities. You cannot deny that. He is the son of a toddy tapper. He has come up from a very poor situation. He has some qualities that is why he has reached where he is. We should accept the truth. We should not lie deliberately. I am friendly with everyone. Even when I was in jail during Emergency, I was friendly with all, communists, socialists. We should have a personal rapport with everyone.

So will Pinarayi Vijayan buck the trend of Kerala alternating between two coalitions? Will the Left retain power?

There is such a feeling among some people, but I won’t be able to say it conclusively. The Congress is going down and nobody can help it revive. Its days are over.

So the LDF has an edge as of today?

It is difficult to say that. But it seems there is a slight edge…because the opposition has not found acceptance among all the people. Ramesh (Chennithala) may be smart… but people are afraid of associating with the Congress because Congress is a sinking ship.

Will the increase in prices of petrol and diesel impact the elections?

No state has demanded (a slash in prices) because they are all benefitting from the hike. On every 1 litre of petrol, the state is also getting a share of the taxes. So they are not complaining.

But it affects the common man…

What to do. On petrol prices…there are international forces at work. It is not because of the situation here alone. The Arab countries which produce petrol, their politics, their eagerness to protect American interests, everything is connected. So, it is not in our control.

How do you assess your performance as an MLA?

I think I have done whatever is possible. In terms of development, independent observers say Nemom has maximum development. Building schools, hospitals, roads…installing lights…that is what common people want…

So, what will be the BJP’s tally this time?

My wish is to see the BJP enter double digits…at least once. It is possible.