Earlier at a rally at Palakkad where ‘Metro Man’ E Sreedharan is contesting as the BJP candidate, Modi said that the “friendly agreement” between LDF and UDF is the worst-kept secret in Kerala politics. 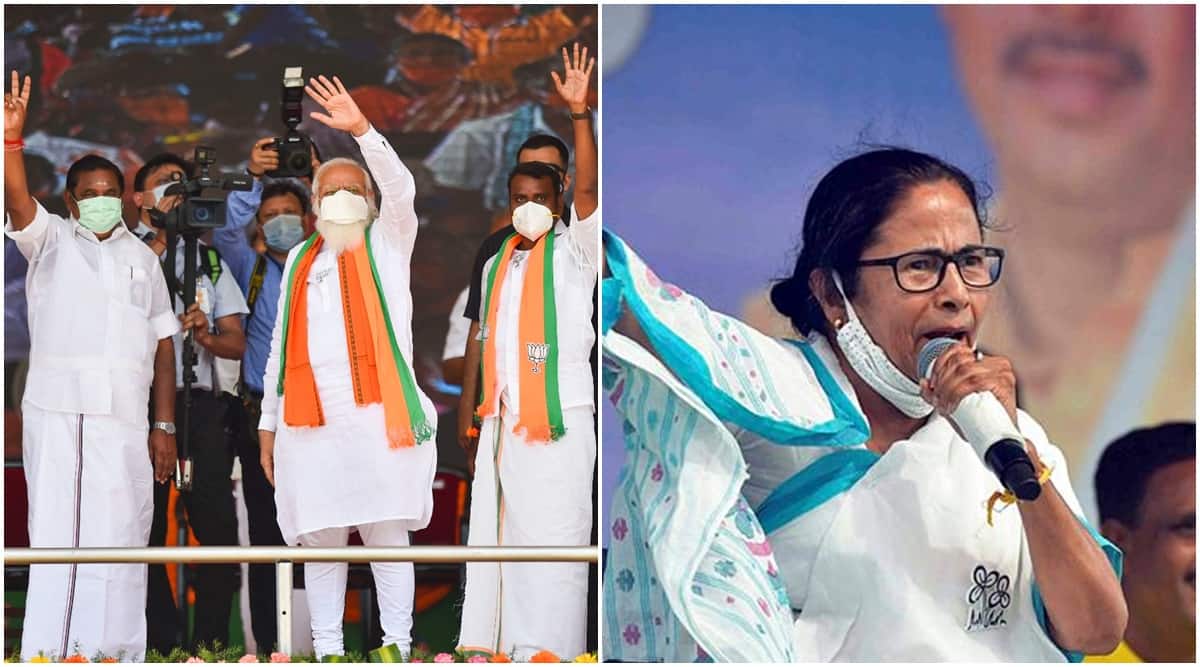 Intensifying their poll pitch on the last day of the campaigning for the second phase of West Bengal Assembly elections, Prime Minister Narendra Modi and West Bengal Chief Minister Mamata Banerjee hurled accusations at each other, with the former challenging the latter over women’s safety in the state.

While Modi raked up the death of 85-year-old mother of a BJP worker who was allegedly attacked by TMC supporters in Bengal, Banerjee accused the BJP of “killing its own people to engineer riots” in the state. Union Home Minister Amit Shah, who held a roadshow in Nandigram, also hit out at Banerjee over the death of the 85-year-old woman.

Speaking at an election rally at Dharapuram in Tamil Nadu, Modi raised the issue of women’s safety and said, “Yesterday, an elderly lady, Shoba Majumdar, lost her life in West Bengal. We saw with horror how goons belonging to TMC brutally attacked her just because her ideology was different. This has been in news for a long time. Did Congress show any empathy? Did DMK and Left condemn it?”

He added, “The speeches of their leaders have nothing positive to offer. They hardly talk about their vision or work. All they do is demean others and spread lies. Congress and DMK have launched their outdated 2G missile, this had one clear target — the women of Tamil Nadu.”

Earlier at a rally at Palakkad where ‘Metro Man’ E Sreedharan is contesting as the BJP candidate, Modi said that the “friendly agreement” between LDF and UDF is the worst-kept secret in Kerala politics.

Responding to the charges during a public meeting in Sonachura, Banerjee said, “They (the BJP) have plans to kill their own people and pass it off as our handiwork to engineer riots. We have the information. Be on guard,” she said without naming the saffron party.”

She also led a 3-km roadshow in Nandigram on Tuesday that led through narrow alleys, as crowds shouted “Jai Hind, Jai Bangla, Mamata Banerjee Zindabad” and denounced “Mir Jafars (betrayers)”. She added, “Nandigram stood united in the battle against forcible land acquisition in which people from all communities participated. Be on guard against any bid to fuel tension by keeping any object in places of worship. We are all united. Defeat the riot mongers,” she said.

Banerjee is pitted against her one time loyalist-turned-rival Suvendu Adhikari of BJP in the high-profile Nandigram constituency. Campaigning for the second phase of West Bengal assembly poll also ended on Tuesday evening, setting the stage for the voting in 30 constituencies spread across four districts on April 1.

Banerjee also alleged that police forces from BJP-ruled states have been brought in to “terrorise” voters in Nandigram assembly constituency and also accused BJP ministers and security forces of distributing cash to lure voters.

“This is the money of PM Cares Fund, this is unaccounted cash amassed during demonetisation, this is the cash having swelled their coffers after sale of PSUs. This is the public money they had looted and now giving in Rs 500/1000 to each voter. We had informed the Election Commission about this but it still continues unabated,” she said.

At a second meeting at Basulichak, she said, “Several ministers from BJP-ruled states and Central ministers are behind distribution of cash. Why are there more than 100 cars in the convoy of Union Home Minister Amit Shah while not more than 5 vehicles are allowed in a convoy during elections?