Haryana, Maharashtra Election Exit Poll Results 2019 Highlights: With voting for the single-phase assembly elections in Haryana and Maharashtra ending on Monday, a series of exit polls have predicted a sweeping majority for the ruling BJP in both the states.

Four separate exit polls estimated that the BJP-Shiv Sena alliance would return to power in the 288-member Maharashtra assembly, with two of them giving more than 200 seats to the ruling combine. On the other hand, pollsters have predicted an emphatic victory for the incumbent BJP government in Haryana, with three exit polls predicting that the saffron party will win over 70 seats.

The run-up to the vote witnessed a campaign which was dominated by the BJP’s aggressive narrative on the nullification of Article 370 and marked by the Opposition’s lacklustre canvassing. The results for Maharashtra’s 288 seats and Haryana’s 90 seats will be announced on October 24.

While Maharashtra will witness a battle of two alliances—the BJP and Shiv Sena on one hand, and the Congress-NCP on the other, Haryana will see a multi-cornered contest.

Exit poll results for Maharashtra and Haryana assembly elections are out. Watch this space for LIVE UPDATES. 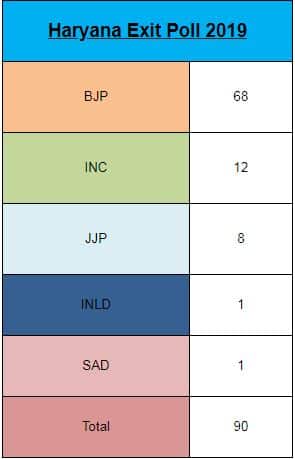 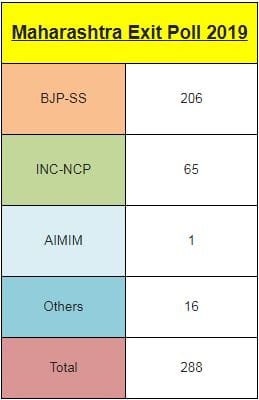 What are exit polls and how are they conducted?

The assembly election results in Maharashtra and Haryana will be declared on October 24.

In the 2014 Maharashtra elections, the BJP had won 122 seats, while Shiv Sena, Congress and NCP had secured 63, 42, and 41 seats, respectively. In Haryana, BJP swept the 2014 polls winning 47 out of 90 seats, with INLD emerging second with 19 and Congress finishing a distant third with 15 seats.

As per the Election Commission rules, the prediction of results of elections in any form or manner during the prohibited period is a violation of the spirit of Section 126A (of the Representation of the People Act) which aims to prevent the electors of constituencies still going to polls from being influenced in their voting by such predictions about the prospects of the various political parties.

Throughout its campaign, the BJP leadership peppered the developmental claims of its state units with a dose of nationalism, with repeated references to Article 370 and the pitch for a nationwide NRC. The state unit of the BJP also sought to raise the Hindutva pitch, demanding the Bharat Ratna for Hindutva icon Vinayak Damodar Savarkar.

In its bid to pin down the incumbent BJP, the Congress leadership stuck to the issue of economic slowdown aside from many of the issues drawn from its Lok Sabha campaign earlier this year—GST, demonetisation, unemployment and the alleged Rafale scam.

The Congress campaign was also marred by factionalism and internal feud in both these states. In Maharashtra, the Opposition campaign was mainly spearheaded by NCP patriarch Sharad Pawar, who took on PM Modi and the BJP. However, the Congress and the NCP failed to hold a single joint rally in contrast to the joint rally held by PM Modi and Shiv Sena president Uddhav Thackeray in Mumbai on October 18.