Maharashtra, Gujarat, Goa (West India) Election Results 2019 Highlights: As BJP-NDA is determined to make a comeback, Gujarat saw a clean sweep by the Saffron party as even Maharashtra witnessed the BJP-Sena combine taking over majority seats. Goa, however with two seats still remains an uncertain terrain.

The BJP-NDA duo was leading in 40 out of the 48 seats in Maharashtra whereas they had a clean sweep in all of the 26 seats in Gujarat.

Maharashtra, Gujarat Election Results 2019 Highlights: Riding high on the ‘Modi wave’, BJP-led NDA is determined to return to power for another five years after securing a stranglehold in Gujarat as well as Maharashtra. In North Goa, the BJP races ahead, however, Congress emerged victorious in South Goa. Election results dashboard

The BJP-NDA duo was leading in 40 out of the 48 seats in Maharashtra whereas they had a clean sweep in all of the 26 seats in Gujarat. BJP national president Amit Shah in his maiden Lok Sabha battle, led in Gujarat’s Gandhinagar with a margin of 5.5. lakh votes, where the party had replaced veteran LK Advani with Shah. In Maharashtra, Congress’ Milind Deora lost by 1 lakh votes and issued a statement congratulating Sena-BJP combine. In Baramati, though NCP leader Supriya Sule was trailing initially, she picked pace and was leading comfortably against BJP’s Kanchan Kul.

NCP chief Parth Pawar, who has made his political debut in Maval was lagging terribly. BJP’s Sujay Vikhe Patil, son of former Congress leader Radhakrishna Vikhe Patil soared in Ahmednagar seat as talks about the latter joining the Saffron party are doing the rounds. Congress had fielded actor-turned-politician Urmila Matondkar in Mumbai North constituency where she trailed by over 4 lakh votes; as Priya Dutt also took to Twitter to congratulate her opponent Poonam Mahajan in Mumbai North Central.

As the contest at the Centre thickens, today will prove if BJP-Sena duo maintain its stronghold or is the NCP-Congress combine likely to prove their mettle in the West region? Stay tuned to this space for latest updates:

The BJP not only repeated its 2014 tally by heading towards a win in all the 26 Lok Sabha seats in Gujarat, but also improved its vote share from 59% in 2014 to over 62% this year as the party returned to power at the Centre with a larger mandate. Leading the BJP’s win in the state was party president Amit Shah, who won from the prestigious Gandhinagar constituency with a margin of over 5.57 lakh votes. In Gujarat, voting was held in a single phase on April 23, which had witnessed a record turnout of 64.11%. Read the full story

Riding a Modi wave, the BJP and Shiv Sena alliance swept the 2019 Lok Sabha elections in Maharashtra on Thursday, winning 41 of the state’s 48 seats. In a near replay of the 2014 Lok Sabha elections, the Congress-NCP alliance was completely routed. While the Congress was leading in just one seat Chandrapur (Vidarbha), its ally NCP won four seats — Satara, Shirur, Baramati in western Maharashtra and Raigad in Konkan region. The AIMIM, under the banner of Vanchit Bahujan Aghadi (VBA), won from Aurangabad in Marathwada. In Amravati, an Independent candidate (backed by NCP) was leading.

Amit Shah: The man, his machine, and the 2019 blueprint

After the BJP’s stunning victory in 2014, many compared Amit Shah to the late BJP leader Pramod Mahajan, who was known for his strategising skills. But someone who knew Shah from his early years in politics said, “Pramod could be indulgent while dealing with a request for a seat from someone he loved or respected, even if he knew he would not be able to win it. But with Shah, it’s impossible to make him oblige if he is not sure you can win that seat.” Read the full story

In Aurangabad, AIMIM leads over Sena

PM Modi easily won his seat in Varanasi with a margin of over 4.3 lakh votes while party president Amit Shah took Gandhinagar in their home state of Gujarat by over 5.5 lakh votes.  Modi and Shah arrived at party headquarters and are addressing a gathering in New Delhi.

Commuters stop for a quick update on #LokSabhaElectionResults at Churchgate station where a big screen has been installed flashing results. A similar screen up at metro stations in Mumbai @IndianExpress pic.twitter.com/eYKgb2MeKm

Feeding each other sweets at Sena HQ Matoshree, Chief Minister Devendra Fadnavis and Shiv Sena Chief Uddhav Thackeray share some light moments. NDA is racing ahead in 40 seats in Maharashtra.

Union Minister for Surface Transport, Shipping and Ganga Rejuvenation Nitin Gadkari has praised Prime Minister Narendra Modi saying the BJP's victory in Lok Sabha elections is due to his leadership "that could deliver in five years what couldn't be delivered in the past 50 years."

He said, "people have faith in leadership of Modi." "I thank people for reposing trust in me again," he said addressing mediapersons at his residence here on Thursday. Supporters celebrated the victory with sandal, sweets and crackers outside his house overflowing with people from all walks of life.

South Goa sitting MP Narendra Sawaikar concedes defeat. After final round of counting of votes, Sawaikar garnered 1,66,072 votes whereas, Congress Francisco Sardinha was leading with 1,81,340 votes.  “I accept my defeat. I thank everyone for the support and co-operation throughout my tenure as MP”,  Sawaikar posted on Facebook.

Congratulating PM Modi, Congress Mumbai South candidate Milind Deora issues a statement where he says that "Mumbai Congress accepts the verdict of the people of Mumbai". Deora was trailing in his constituency against BJP's Arvind Sawant by 1 lakh votes. 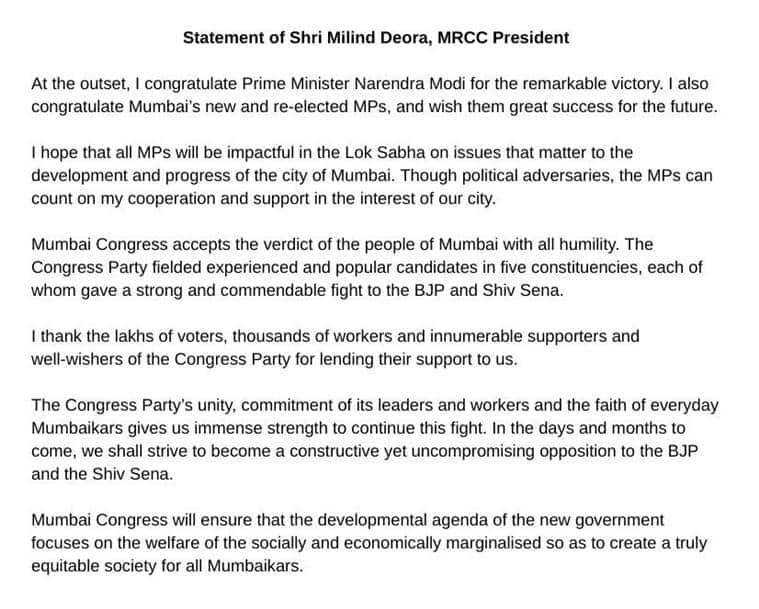 As Rahul Gandhi addressed a press conference in New Delhi today conceding defeat in Amethi; on the other side, Congress main office in Mumbai wears a deserted look as BJP takes over majority seats in Maharashtra

PM Modi thanks people for 'placing faith in NDA'

PM Modi thanks people for placing 'faith in the (NDA) alliance' and also congratulated BJP workers.

Thank you India! The faith placed in our alliance is humbling and gives us strength to work even harder to fulfil people's aspirations.

I salute every BJP Karyakarta for their determination, perseverance & hardwork. They went home to home, elaborating on our development agenda.

Amit Shah leads with margin of 5.54 lakh votes in Gandhinagar

Party president Amit Shah, who is contesting his maiden Lok Sabha election, has taken a lead of over 5.54 lakh votes over his nearest Congress rival C J Chavda in Gandhinagar. BJP patriarch L K Advani had won from Gandhinagar by 4.83 lakh votes in 2014.

Maharashtra: Ashok Chavan trailing in Nanded by over 30,000 votes

NCP chief Sharad Pawar Thursday said he would not blame the electronic voting machines (EVMS) for the defeat of anti-BJP parties in the Lok Sabha polls and added he has gracefully accepted the people's mandate.

The NCP, along with other opposition parties, had repeatedly raised concerns over the possibility of EVM tampering. Pawar said the opposition parties had anticipated the BJP would do well in certain states, but did not expect "such a big victory" across the country.

"Doubts were indeed raised (about EVMs functioning)," Pawar told reporters here. "But I don't want to blame the machines now since the result is out. Once the verdict is out, it has to be accepted gracefully and I am accepting it gracefully," he said. (PTI)

On April 19, en route to Gujarat, from where, he said, he’s seeking a public mandate to the ‘highest panchayat (Lok Sabha)’, he spoke with Ravish Tiwari and Raj Kamal Jha.

We had Narendra Modiji’s naam (name) in 2014. Now we have Modiji’s naam aur kaam (name and work). In 2014, there was hope in Modi, today the people have hope and expectations. Read Full interview here

Prime Minister Narendra Modi who had contested the Lok Sabha polls from Vadodara in 2014, did not seek re-election from his home constituency and instead focused on his seat in Varanasi. However, here are celebratory pictures of PM Modi's mother in Gandhinagar. Meanwhile, Amit Shah is leading in Gandhinagar with a huge margin. Watch the video

In Banaksthana constituency, Parbat Patel of BJP faced challenges from Congress' Parthi Bhatol. Some other prominent contenders to look out for in Gujarat are Mansukh Vasava in Bharuch, Mohan Kundariya in Rajkot, Anand's Bharatsinh Solanki.

South Mumbai again saw Congress candidate Milind Deora pitted against the incumbent Arvind Sawant whereas, Poonam Mahajan continues to be the face for BJP against the Grand Old Party's Priya Dutt in Mumbai North Central seat. People are looking forward to the contest in North Mumbai in which Urmila Matondkar was fielded by Congress and Baramati seat where Supriya Sule had successfully braved the 'Modi wave' in 2014.

Goa Congress candidates are hoping to bank on Parrikar's lost sheen and pull out a trump card against the incumbent BJP leaders in the state. Girish Chodankar had contested from North Goa, whereas Congress' Francis Sardinha put up a tough front in South Goa. Union Territories of Daman-Diu and Dadra-Nagar Haveli had also seen BJP take over Congress in 2014 in each seat in of both places.

Shruti NairShruti Nair is a Sub-Editor with The Indian Express. She tweets at <a ... read more