Maharashtra Election Exit Poll Results 2019 HIGHLIGHTS: A voter turnout of 54.53 per cent was recorded till 5 pm in Maharashtra, after polling for 288 Assembly seats began at 7 am on Monday, officials said.

The exit polls have predicted an easy win for the BJP-Shiv Sena combine in Maharashtra, signalling a return of Devendra Fadnavis as the chief minister of the state. (PTI)

Meanwhile, voting concluded on the 288 seats in the state by 6 pm today with a tentative voter turnout of 56 per cent. Besides this, polling also took place for a bye-elections in Satara Lok Sabha constituency. Follow Maharashtra, Haryana exit poll results here

A Swabhimani Paksha candidate was admitted to the hospital after three motocycle-borne masked men opened fire at him when he was going in a car, and also beat him up after pulling him out of the vehicle in Amravati district, police said. The attackers later set his car ablaze. Besides this, minor scuffle was reported in Jalna, Beed and Virar districts.

Maharashtra voted today with BJP-Shiv Sena locked in a direct contest with Congress-NCP. Here are the HIGHLIGHTS.

Maharashtra BJP president and state minister Chandrakant Patil, who is contesting from Kothrud constituency here, claimed on Monday that he will win with a huge margin.

Patil was speaking to reporters before heading for Kolhapur, his native city, to cast his vote.

"Since the 2014 elections, people's faith in politics and politicians has increased, and the reason is the transparent government of Prime Minister Narendra Modi," he said. (PTI)

60.25% voter turnout recorded till 6 pm for the by-election to the Satara Lok Sabha seat.

The News18-IPSOS exit poll survey predicts 243 seats for the BJP-Shiv Sena alliance, while the Congress-NCP combine has been pegged to get 41 seats.

The polling in Pune district crossed 50 per cent mark by 5 pm as the registration was total of 52.55 per cent turnout. The maximum turnout was 74.25 per cent in Indapur while the lowest was 36.08 per cent in Kasbapeth. The polling ended at 6 pm.

The constituency with low turnout also included 38.14 per cent in Pune Cantonment, 39.2 per cent in Shivajinagar.

Maharashtra recorded a rather low voter turnout on Monday with only 54.53 per cent polling till 5 pm. With the voting process about to be concluded, the turnout is expected to remain low.

Voters in stand in queue at Shahu Nagar ground in Dharavi. State election commission has placed wooden sheets at playground to prevent people from muddy patch.

Film actor Salman Khan casts his vote at a polling booth in Bandra West on Monday.

RPI leader Sunil Khambe being taken to Thane Nagar police station after he threw an ink bottle on the EVM.

35.2 per cent voter turnout in Mumbai suburbs till 3 pm

Mumbai suburbs recorded a voter turnout of 35.2 per cent till 3 pm. The overall state voter turnout at the same time was 43.78 per cent.

Unrest in Thane after Republican Party of India (RPI) leader Sunil Khambe threw an ink bottle on the EVM where he had gone to vote. He was protesting the usage of EVMs. 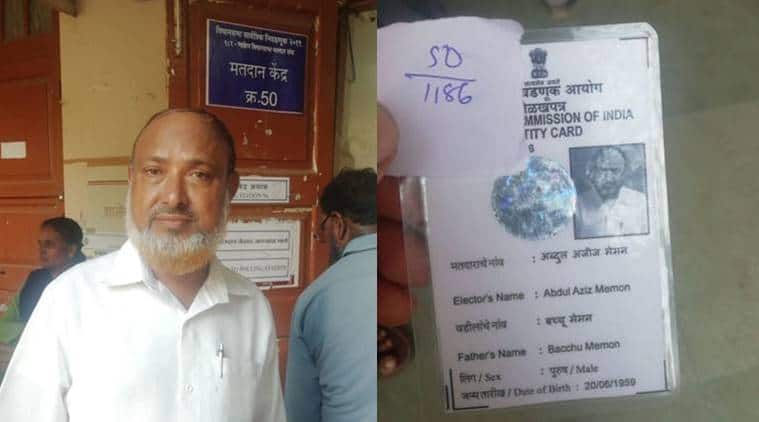 Bogus voting reported at Mahim Wlwest R. C. Mahim Municipal School polling booth centre in Room No 50. Abdul Aziz Memon, a Mahim resident who had gone to vote claimed that someone else had already voted at the polling centre in his name.

Snag developed in EVM at polling booth in Wadala

Snag developed in EVM at polling booth number 13 at Wadala in Amulakh Amichand School at Rafi Ahmed Kidwai Marg. People waiting in queue since half an hour. This is the only polling booth in the area.

41.1 per cent voter turnout in Pune district by 3 pm

Voting has picked up in Pune district with overall turnout reaching 41.1 per cent by 3 pm.

So far, lowest voters turnout has been seen in Kasba Peth (26.11 per cent) where Pune Mayor Mukta Tilak trying her luck after Girish Bapat who represented the contitutency for five consecutive terms vacated it after he was elected Pune MP. She is up against Congress' Arvind Shinde.

Jaya Bachchan, Abhishek Bachchan and Aishwarya Rai Bachchan leave after casting their vote at a polling booth in Juhu, Mumbai.

41 per cent voting in Pune district till 3pm

Total polling till 3pm in Pune district is 41.10 per cent

In several villages in Palghar, zero voter turnout was registered as the villagers boycotted the election. (Photo from Varor village by Deepak Joshi)

Here's why the villagers are boycotting the polls 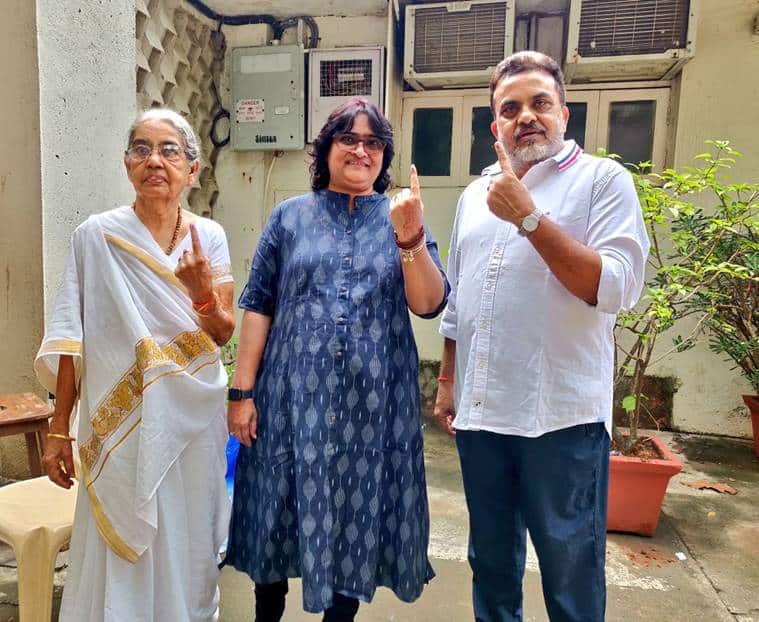 Shah Rukh Khan and his wife Gauri cast their votes at polling booth no 177 in Bandra West, Mumbai.

Shah Rukh Khan and his wife Gauri cast their votes at polling booth no 177 in Bandra West, Mumbai. #MaharashtraAssemblyPolls pic.twitter.com/kp6kt9IYWw

The ballot is stronger than the bullet ~ Abraham Lincoln#MaharashtraAssemblyPolls pic.twitter.com/VyFOgEksaI

EC sets up creches at booths for kids of women voters

In a bid to make the polling process convenient for women voters, temporary creches for their children have seen set up for the first time in some Assembly segments of Maharashtra, an official said on Monday.

Since many women voters have no option but to carry their children along with them to the polling booths, the Election Commission came up with this initiative, the EC official said.

"The experiment was carried out for the first time during the Lok Sabha elections held earlier this year, and now the EC has replicated the same concept in the Maharashtra polls," he said.

The initiative was taken after the EC observed how voters travelled to the polling stations and how much average time they spent at the booths, he said. (PTI)

Clashes had erupted between Sena and BVA leaders at a polling booth, bringing the voting procedure to a halt for sometime. The BVA workers had claimed that Sena leader Pradeep Sharma was trying to threaten the poll officials.

Assembly constituencies in Pune district saw maximum voter turn out till 1 pm as the voters yet to come out in large to exercise their right in the Pune city.

The Ambegaon assembly constituency saw the highest voter turnout of 38.26 per cent, inching past Baramati which had 37.61 per cent polling till 11 am. They were followed by Bhor with 36.15 per cent, Maval with 35.4 per cent and Junnar with 35.3 per cent turnout.

On the other hand, the constituencies in the Pune city are yet to cross the 30 per cent mark by 1 pm. The Kasbapeth Assembly constituency in the heart of the city has registered the lowest turnout of 18.57 per cent while Pune Cantonment has seen only 18.82 per cent voters exercising their franchise.

As voting continued across the state, reports of scuffles came in from Beed and Jalna districts, PTI reported. In Beed's Balepeer area, supporters of Shiv Sena candidate Jaydatt Kshirsagar and NCP candidate Sandeep Kshirsagar had an altercation over allegations of vehicles being used to ferry voters to polling booths, an official said. The area was tense for a while before police, as well as the two candidates, managed to defuse the situation, he added. In Jalna's Jamkhed area, two groups owing allegiance to local leaders clashed before being separated by police.

In Virar, clashes between Sena and Bahujan Vikas Aaghadi (BVA) leaders brought the voting procedure to a halt for sometime. The BVA workers claimed that Sena leader Pradeep Sharma was trying to threaten the poll officials.

Shabana Azmi and Javed Akhtar after casting their vote at a polling booth in Mumbai.

Shabana Azmi and Javed Akhtar after casting their vote at a polling booth in Mumbai. #MaharashtraAssemblyPolls pic.twitter.com/JQXSL5sxUJ

At 1 pm, a voter turnout of 33.73 per cent was recorded at Maharashtra's Ahmednagar district. 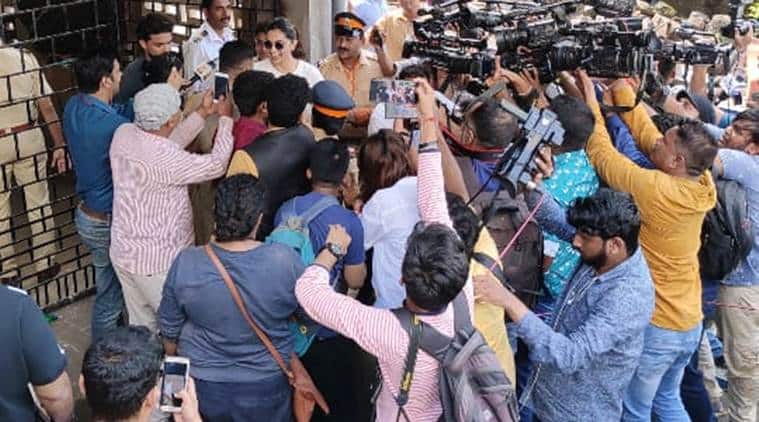 'Start this Diwali season with a bang': Preity Zinta 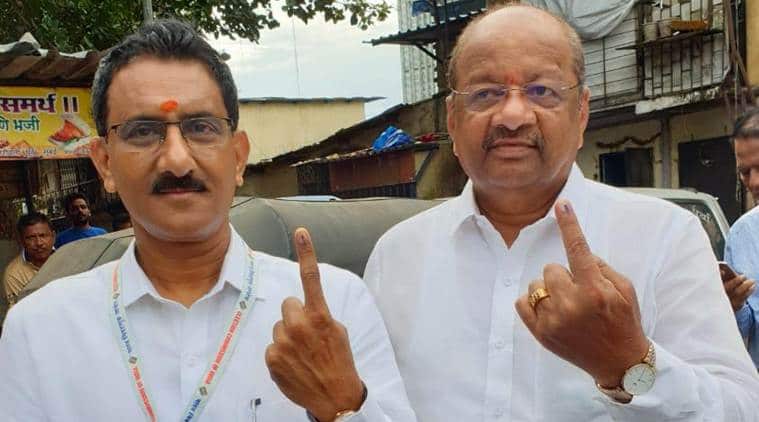 Faulty EVMs delayed polling at some booths in Maharashtra's Ratnagiri and Bhandara districts on Monday, an official said. Polling was also halted for sometime at a booth in Worli area of Mumbai due to a technical error, he added. The state Congress unit also sent 187 complaints to the Election Commission of malfunctioning of EVMs.

Cricket icon Sachin Tendulkar led the sports fraternity to vote for the Maharashtra Assembly elections and appealed to people to come out in large numbers to exercise their democratic right. Tendulkar cast his vote along with wife Anjali and son Arjun. "This morning, I read in a newspaper something which is not so common and talks about commitment. The article made a mention of three senior citizens, including one wheelchair-bound 94-year-old person, who was going to make an effort to come out and vote," Tendulkar said.

Happy to have voted & fulfilled my responsibility. Let’s turn out in large numbers to vote & be part of a vibrant democracy.#MaharashtraAssemblyPolls pic.twitter.com/S1zQXtqEQc

"I request everyone to come out and vote in large numbers, this is a celebration of democracy," NCP chief Sharad Pawar said after casting his vote in Mumbai.

#WATCH Nationalist Congress Party Chief Sharad Pawar after casting his vote in Mumbai: I request everyone to come out and vote in large numbers, this is a celebration of democracy. #MaharashtraAssemblyPolls pic.twitter.com/V920UfLZr9

Three motocycle-borne masked men fired at a candidate of pro-farmer outfit Swabhimani Paksha when he was going in a car, and also beat him up after pulling him out of the vehicle in Maharashtra's Amravati district, police said. The attackers later set the car ablaze, Shendurjana Ghat police station's inspector Maruti Gedam said. Devendra Bhuyar, the nominee of Raju Shetti's Swabhimani Paksha from Morshi seat, was taken to a hospital where his condition was reported to be normal. Maharashtra elections LIVE Updates: Out of the total 288 seats in the Maharashtra Assembly, BJP is contesting on 164 seats while Sena has fielded candidates on 126 seats. On the other hand, the Congress has fielded 147 candidates and ally NCP 121. In 2014 elections, BJP won 122 seats, Sena 63, Congress 42 and the NCP 41.

If the scrapping of the special status of Jammu and Kashmir under Article 370 was the pivot of BJP’s poll campaign, the Congress-NCP camp raised issues of economic slowdown and joblessness. The lacklustre canvassing by the Opposition was evident from the fact that Congress-NCP alliance — the principal opposition formation in the contest — not holding a single joint rally.