The Congress said it would bring in Ma Narmada Nyay legislation to develop the Narmada Parikrama (circumambulation) route and also repeated its promise to develop Ram Van Gaman Path and build gaushala in every panchayat. 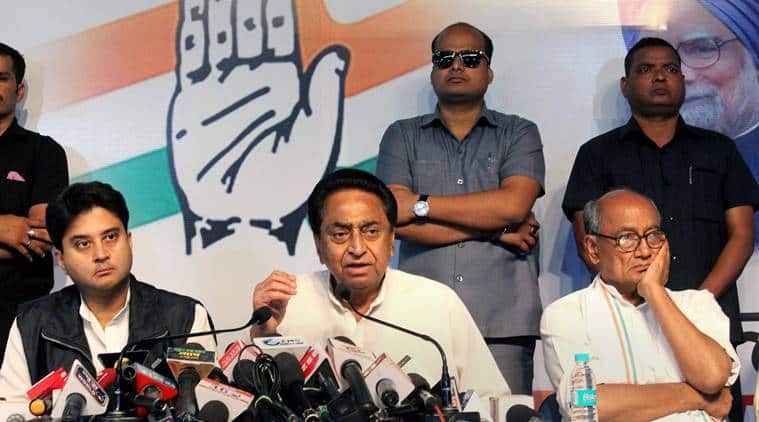 From a commitment to develop Ram Path Gaman, the route taken by Lord Ram during his exile, to building gaushalas in every panchayat; from starting the commercial production of gau mutra (cow urine) to opening a spiritual department, the Congress manifesto for the November 28 election in Madhya Pradesh released Saturday has hues of saffron that may make the BJP proud.

In Opposition for 15 years, the Congress has promised to build many more cow sanctuaries and provide grants for their upkeep and maintenance in a BJP-ruled state that boasts of the country’s first cow sanctuary whose foundation was laid by RSS chief Mohan Bhagwat.

Resolving to make Madhya Pradesh corruption free, the Congress manifesto focuses on agriculture with a promise to waive farm loans up to Rs 2 lakh, halve farmers’ electricity dues and bonus on 17 agriculture commodities, while trying to appease all castes and pitching for Made In Madhya Pradesh goods.

The manifesto also promises to set up temporary camps on main roads to provide for treatment of injured cows and last rites of dead cows besides a commitment to make available grazing land for cattle.

According to the manifesto, the Congress will bring a Ma Narmada Nyas Adhiniyam and develop the Narmada Parikrama (circumambulation) route and build resting places every 15 km. The Ram Path Gaman will be built from Chitrakoot within the state boundary.

“The BJP used to brand us as Muslim Party. It’s a conscious decision to shed that tag thrust on us by our rivals. Earlier, we did not do anything to change the perception,’’ manifesto committee chairman Rajendra Singh told The Sunday Express.

“We are not a Muslim party, we are a secular party. But it’s true that you can’t win elections without taking care of the majority community. We do respect Muslims,’’ said Singh, who is also the Deputy Speaker in the Assembly.

“When you have a gaushala you will also have dung and urine. Why let it go waste? When gaumutra is purchased for pesticides why not sell it?’’ said Singh adding that there will be a separate fund for gaushalas because “we can’t run them on charity”.

The manifesto promises to amend controversial provisions of the anti-cow slaughter Act without providing details. Singh said that at some places bulls are used for agriculture but transport of animals has almost come to a standstill because elements like the Bajrang Dal attack vehicles, collect money and leave the animals to fend for themselves. Stray cattle also damage crops and make life difficult for farmers who spend sleepless nights, he said.

“The cow is a sacred animal for us. We can’t encourage slaughter at any cost but legal transportation must be allowed for agriculture purpose because the livelihood of many depends on it,’’ he said.

The manifesto promises a spiritual department and the opening of new Sanskrit schools to promote the language. Referring to Tapti, Mandakini and Kshipra rivers as “mother”, the manifesto promises to form trusts for these sacred rivers besides a law to declare as living entities all holy rivers mentioned in the scriptures.

The Congress also promised new rules for freeing temples of encroachment and adding names of priests and mahants to properties of maths and temples. Referring to guru-shishya parampara, the manifesto also promises rules for hereditary succession in mutts and temples.

The manifesto includes a rethink on the anti-conversion law. “We are strictly against forced conversion but we also have to stop violence in the name of stopping conversion. We will ensure that no innocent is harassed,’’ the manifesto states. It also promises legal provisions, on the lines of anti-terrorism laws, against communalism and caste disturbances.

Other highlights of Congress manifesto

#Creation of facilities on highways for treatment of injured cows and last rites of dead cows
#Focus on ‘Made in Madhya Pradesh’
#Closure of Vyapam, the Hindi acronym for professional examination board
#Setting up of a spiritual department
#Free education for girls from school to PhD
#Rs 5 bonus on milk
#Making MP free of narcotics (however no mention of prohibition)
#Constitution of Vidhan Parishad (legislative council)
#New survey for people under ‘below poverty level’ (BPL) category