The BJP, which started making inroads in the state since 1952 and won three of four seats in 1989, is banking on Prime Minister Narendra Modi’s popularity and the Congress’s alleged failure in communicating its programmes. 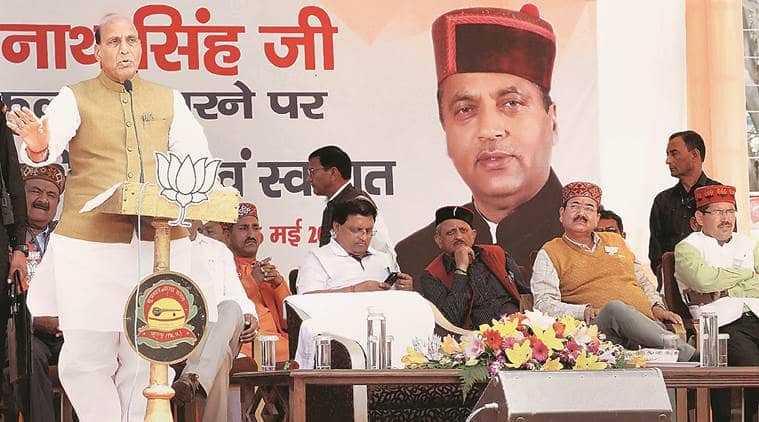 Indifference among voters and internal differences among parties mark the campaign for the Lok Sabha elections in Himachal Pradesh.

The BJP, which started making inroads in the state since 1952 and won three of four seats in 1989, is banking on Prime Minister Narendra Modi’s popularity and the Congress’s alleged failure in communicating its programmes, including the ambitious NYAY, to make a complete sweep in the hilly state. The state has four Lok Sabha seats — Shimla, Mandi, Kangra and Hamirpur.

Chief Minister Jai Ram Thakur, who has managed to steer the BJP boat despite being rocked by factionalism, hoped “the Modi factor” would help the party paper over every other issue.

“First of all, now we are working as a single unit. All our senior leaders, including Shanta Kumar (the veteran who has not been given a ticket this election), have been travelling extensively and working hard for party candidates,” Thakur said.

The Opposition Congress, despite the intensifying one-upmanship within the party, is giving a formidable fight to the BJP in at least two constituencies — Shimla and Hamirpur.

In Himachal Pradesh, a state known for its bipolar politics, the BJP and Congress share several traits — among them, factionalism. While the BJP under CM Jai Ram Thakur has managed to keep a lid on internal feuds, the Congress’s differences are spilling out in public. But first, the two parties have a bigger battle on their hands — voter indifference

Shimla, a reserved constituency, is witnessing a tight fight between the Congress’s Dhani Ram Shandil and BJP’s Suresh Kashyap. Congress leaders and workers in Shimla admit that the seat is the best bet for the party in a state which has a high proportion of Dalit— over a quarter of Himachal Pradesh’s population are Scheduled Castes. At 25.2 per cent, the state has the second highest SC population after Punjab.

“There is anti-incumbency against the BJP in the state, particularly in Shimla. A large section of BJP workers in Shimla are upset also because the sitting MP Virender Kashyap was dropped,” said Jai Singh, who was part of the door-to-door campaign for the Congress in Shimla.

Satpal Satti interview: If Rahul keeps calling Modiji chor, he will have to face people who love Modi’

A top BJP leader said Kashyap, a two-term Lok Sabha MP from Shimla, was dropped after “an internal survey” by the party in the constituency. However, Chief Minister Thakur maintained that the BJP had overcome the initial hiccups after the ticket was distributed and “its working as one unit” in Shimla.

But the CM is not taking any chances — he has addressed almost 70 rallies. “I am not leaving any Assembly seat,”he said, adding, “I made it a point to speak about the schemes, programmes and initiatives taken by the Modi government and the state government.

But it was Modi’s decisive and strong leadership that came across as our strongest point in the campaign. It has overshadowed everything else.”

If communication has emerged as the biggest strength of the BJP, it may well end up proving to be the Congress’s undoing in the state. Not too many voters were aware of the Congress’s income guarantee scheme, Nyuntam Aay Yojana (NYAY). “NYAY? What’s that? No one told me about it. I don’t think I am eligible… I am not a farmer,” says Sheela Devi, 49, who had minutes ago expressed her dismay at the BJP-led Central government’s alleged apathy towards daily wagers.

Lucky, a photographer waiting for his friend on Mall Road, also says, “NYAY? I do not know about any such programme.” His friend Bhatti, who joins him later, appreciates Thakur’s work as chief minister — he too hasn’t heard about NYAY.

“It’s not just that many have not heard of the Congress’s NYAY. Even those who have heard are not convinced about
it. Congress still faces a trust deficiency,” Chief Minister Thakur said.

However, Ram Sharma, a Congress leader in Shimla, said: “We have campaigned about the scheme extensively. The trust deficiency the CM is talking about is actually with its leadership. No one believes Modi,” he said.

In Himachal, what binds the Congress and BJP camps is factionalism. In the BJP, Thakur has managed an uneasy truce between veterans Shanta Kumar, Prem Kumar Dhumal and J P Nadda. The Congress’s former CMs Virbhadra Singh and Sukh Ram, along with state chief Sukhvinder Singh Sukhu and Kuldeep Rathore, tried to patch up, but differences have emerged in public during the campaign.

But both parties will face their biggest challenge on voting day, with voters largely indifferent. “Who is bothered about this small state? Election fever is in Uttar Pradesh. This time, very few people want to talk about election,” says photographer Lucky.