Lok Sabha Election 2019 India Phase 5 Voting: The stakes are high for the ruling BJP and its allies as it had swept 40 of these seats in 2014, leaving just two for the Congress.

Women stand in queue to cast their vote in the fifth phase polling in Ayodhya, Faizabad Monday. (Express photo by Vishal Srivastav)

Election 2019 Phase 5 Voting: Fifty-one constituencies across seven states voted on Monday in the fifth phase of the Lok Sabha elections. Amid reports of violence and EVM glitches, the voting came to a close at around 7 PM on Monday. The total voter turnout was recorded at 62.56%.

The BJP demanded fresh polling at Barrackpore Lok Sabha constituency in West Bengal, accusing the Trinamool Congress (TMC) of unleashing “violence” on its voters. The saffron party’s demand came after a scuffle between its Barrackpore candidate Arjun Singh and central forces was reported when the leader tried to enter a booth following allegations that voters were not being allowed to exercise their franchise there. Union minister Prakash Javadekar accused TMC “goons” of booth-capturing and not letting BJP voters cast their votes by resorting to threats and violence. In Jammu and Kashmir, militants lobbed a grenade at a polling station in Pulwama and set off an explosion at another in the district during voting in the Anantnag constituency.

In Uttar Pradesh, both Rae Bareli and Amethi — constituencies which are traditional strongholds of Congress — will see a riveting contest, with the SP-BSP alliance lending their support to the party by not fielding their candidates from the respective constituencies. In Amethi, Congress president Rahul Gandhi faces a stiff challenge from BJP’s Smriti Irani, who brought down his victory margin to just over a lakh in the 2014 elections. In Rae Bareli, UPA chairperson Sonia Gandhi is pitted against former Congress leader Dinesh Pratap Singh, who switched the BJP recently.

Voting concluded in 51 Lok Sabha seats in the fifth phase of elections today. Total voter turnout is recorded at 62.56%

The Congress has sought re-polling in several booths in Shopian and Pulwama districts of the Anantnag parliamentary constituency, alleging that the NC and the PDP indulged in bogus voting in many areas.

In a statement, the Jammu and Kashmir Pradesh Congress Committee president allege bogus voting in some booths under Pampore and Rajpora Assembly segments.

The matter has been reported to the Returning Officer for immediate necessary action, he said.

About 59 per cent voter turnout was recorded till 5 pm Monday in 12 Lok Sabha seats in Rajasthan where two former Olympians are among the 134 candidates in the fray.

The maximum voter turnout of 68.89 per cent was recorded in the Ganganagar (SC) seat. Jaipur, Churu and Alwar recorded 63.89 per cent,  61.21 per cent and 60.99 cent polling, respectively, according to the website of the chief electoral officer of Rajasthan.

Bihar recorded a 57.86% voter turnout in the five Lok Sabha constituencies that voted today in the fifth phase of Lok Sabha elections, till 6 PM.

Over 53 per cent voter turnout was recorded Monday till 5 pm in 14 Lok Sabha seats in Uttar Pradesh where Union ministers Rajnath Singh and Smriti Irani, UPA chairperson Sonia Gandhi and Congress president Rahul Gandhi are in the fray.

Election Commission of India officials here said polling was going on smoothly, barring some complaints of EVM malfunctioning which were attended to immediately.

Due to cyclone Fani, the Election Commission has decided to extend the completion of the elections on Patkura assembly constituency for 60 days. Earlier, ECI had appointed 19th May as the date of poll for Patkura Assembly Constituency after the demise of BJD candidate Bed Prakash Agarwalla. (ANI)

Scuffle breaks out between TMC MP and security forces in Howrah

A scuffle broke out between TMC's MP from Howrah, Prasun Banerjee and security forces at polling booth no. 49 & 50 in Howrah.

An estimated 50.70% voters turned out to vote across seven states today in the fifth phase of the Lok Sabha elections, with Bihar recording the maximum turnout at 44.08% so far, according to the Election Commission. 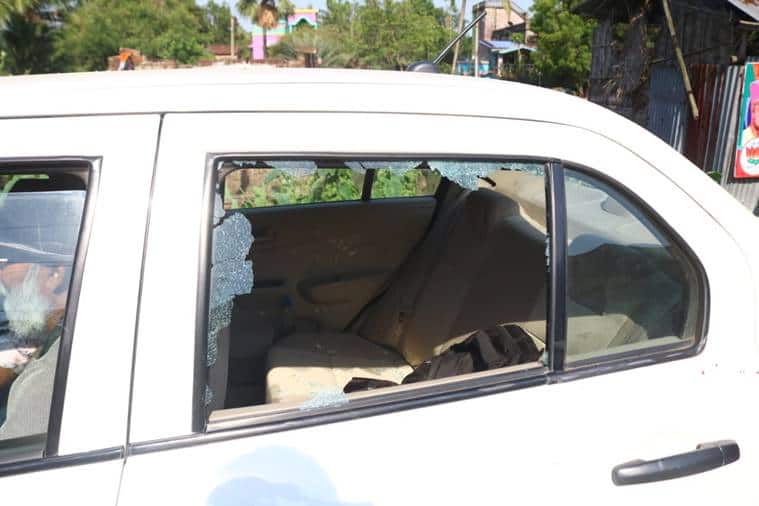 In all 49.64per cent votes were polled in the five polling booths in three districts, Election Commission officials here said.
The re-poll had been ordered in view of technical glitches in the electronic voting machines in these polling booths.

A grenade attack on a polling booth in Jammu and Kashmir's Pulwama district, violence in West Bengal and EVM glitches were reported during the fifth phase of Lok Sabha polls Monday across seven states in which voters turned out in considerable numbers till the afternoon.

In West Bengal, a scuffle broke out between Barrackpore seat's BJP candidate Arjun Singh and central forces when the former TMC MLA tried to enter a booth following allegations that voters were not being allowed to exercise their franchise there, officials said. (PTI) 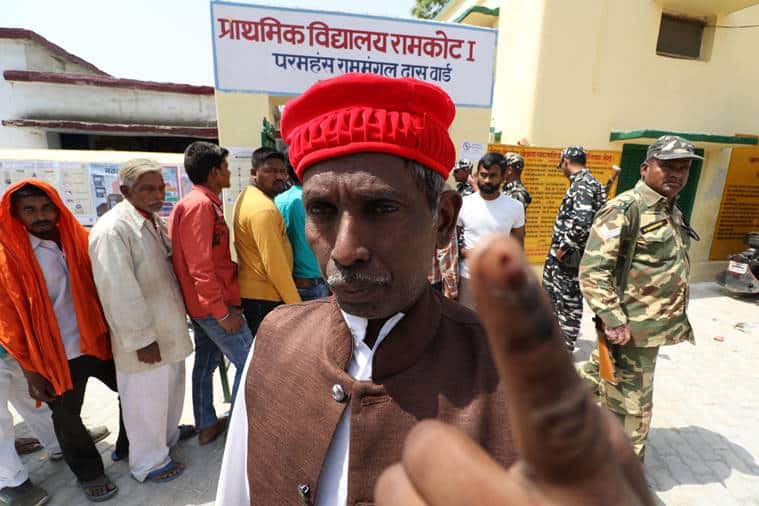 A voter turnout of 42.7 per cent was recorded in Rajasthan's 12 Lok Sabha seats, where polling began at 7 am, in the first six hours on Monday, according to the website of chief electoral officer of Rajasthan.

The maximum voter turnout of 47.45 per cent was recorded in Ganganagar (SC) seat.

Besides these six seats, polling is also underway amid tight security in Bikaner, Jhunjhunu, Jaipur rural, Bharatpur, Karauli-Dholpur and Dausa.

The overall voter turnout in the 51 constituencies across 7 states was recorded at 31.29% till 1 pm, ANI reported.

An estimated 26.19 per cent of over 87.66 lakh electorate exercised their franchise till noon in five Lok Sabha seats of Bihar on Monday, during the fifth phase of the seven-phase polls, PTI reported.

Of the five Lok Sabha seats, Saran recorded the highest turnout so far at 29 per cent, followed by Muzaffarpur at 26.28 per cent and Madhubani at 25.85 per cent.

Both Sitamarhi and Hajipur constituencies registered 25 per cent voting each till noon.

Sporadic incidents of violence were reported during polling in the fifth phase of Lok Sabha election in seven seats of West Bengal Monday, with around 33.47 per cent of nearly 1.17 crore voters casting their ballots in the first four hours, PTI reported. Violence was reported from Barrackpore, Bangaon, Howrah and Hooghly constituencies

A scuffle between Barrackpore seat's BJP candidate Arjun Singh and central forces was reported when the former TMC MLA tried to enter a booth following allegations that voters were not being allowed to exercise their franchise there, the official said. Singh who was allegedly injured during the scuffle, was later seen chasing "fake voters" in Naihati area.

"Our agents were not allowed inside booths. People were not allowed to vote properly and I went there to have a look. I have the right to enter booths but police stopped me and hit me," Singh told PTI.

Meanwhile, the BJP has asked for fresh polling in Barrackpore Lok Sabha seat, accusing TMC of resorting to 'violence' to prevent BJP voters cast their votes.

Lok Sabha Election Live: The fifth phase will see voting in many high-profile seats. In Uttar Pradesh, both Rae Bareli and Amethi — constituencies which are traditional strongholds of Congress — will see a riveting contest, with the SP-BSP alliance lending their support to the party.

The voter turnout in Uttar Pradesh in the first two hours polling was nearly 10 per cent, PTI reported. There were reports of EVM glitches in some polling booths, including Amethi and Rae Bareli, the two strongholds of Congress. Election officials here said polling was going on smoothly, barring some complaints of EVM malfunctioning, which were attended to immediately to ensure voting was not hampered.

Fourteen seats in Uttar Pradesh, 12 in Rajasthan, seven each in West Bengal and Madhya Pradesh, five in Bihar and four in Jharkhand will go to polls, in addition to Ladakh and Anantnag constituencies in Jammu and Kashmir. This is the first election in Ladakh division following its split from the Kashmir division earlier this year.

A total of 51 constituencies across seven states are going to polls in the fifth phase of the Lok Sabha elections. Besides, re-polling will be conducted in five polling booths for three Assembly and five Lok Sabha segments in three districts of Andhra Pradesh.

The stakes are high for the ruling BJP and its allies as it had swept 40 of these seats in 2014, leaving just two for the Congress and the rest for other opposition parties such as the Trinamool Congress (seven).