Lok Sabha Elections 2019 India: Elections will be held in seven phases, between April 11 and May 19, involving close to 90 crore voters. The results will be declared on May 23, ten days before the term of the current House expires.

Sadhvi Pragya Singh Thakur is greeted by BJP National Vice President Prabhat Jha after her name was finalised as the party candidate for Bhopal constituency, at BJP at the Madhya Pradesh BJP headquarters in Bhopal, Wednesday, April 17, 2019. (PTI Photo)

Sadhvi will contest from Bhopal Lok Sabha seat after former Madhya Pradesh chief ministers Chouhan and Uma Bharti declined to contest from the constituency. She will take on Congress candidate Digvijaya Singh.

Six persons were killed and 101 were injured when an improvised explosive device strapped on a motorcycle went off at Malegaon on September 29, 2008.

PM Modi in Anand, Gujarat: Congress has said in its manifesto that it wants to remove the sedition law, so that stone pelting in J&K & Naxalism in rest of the places in the country can be strengthened, 'tukde tukde gang desh ke tukde karne ki apni shararatein khule aam kar paayein'

Congress not ready for compromise in Delhi: AAP's Sanjay Singh

In order to stop BJP we were ready for an alliance with Congress, but Congress is not in a mood for any coalition. It is a matter of sadness, that even after so many efforts, Congress is not ready for any kind of compromise, Aam Aadmi Party (AAP) leader Sanjay Singh said today.

Sadhvi Pragya: Opposition insulted Hindutva, it will be one of our major poll issues

Hours after formally joining the BJP and being declared the candidate from the Bhopal Lok Sabha seat, Sadhvi Pragya Singh Thakur—who is an accused in the 2008 Malegaon blast case—said on Wednesday that one of the issues she would focus on in her campaign will be the Opposition linking Hindutva with terrorism.

Speaking to reporters, Thakur said, “They (Opposition) insulted the Hindu dharma, the Sanatan dharma and Hindutva. They insulted the bhagwa (saffron flag). It will be one of our major issues in the coming elections.” Read more

Election to the Lok Sabha constituency of Vellore in Tamil Nadu was cancelled Tuesday, two days before the state votes, on a recommendation from the Election Commission in the wake of cash seizures, allegedly from the premises of DMK candidate Kathir Anand, son of party treasurer Duraimurugan.  READ FULL REPORT 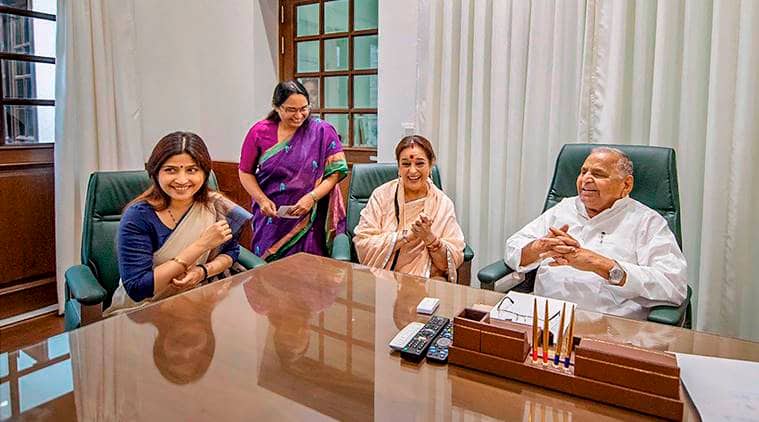 Addressing a rally in Odisha's Dhenkanel, BJP president Amit Shah said democracy is in jeopardy in the state. "The state is facing 'Babu Raj' under BJD rule," he said.

Odisha: Voting underway in bypoll to Brajrajnagar Assembly segment
All in yellow, Bhagat Singh village awaits ascension of Bhagwant Mann as CM
Sawant to meet PM, Shah, Nadda today over govt formation in Goa
BJP to decide on Uttarakhand CM after Holi
After Punjab, AAP all set to venture into Haryana
More from Elections >>
UPA regime had sent Shah, cops to jail to topple my govt: Modi

Prime Minister Narendra Modi Wednesday said the then UPA government arrested BJP president Amit Shah and some police officers in Gujarat to topple the state government then headed by him.

Speaking at a poll rally, Modi also said this election will decide if nationalist forces will rule the country or those who want to help the "tukde tukde gang" by scrapping sedition law.

"From 2004 to 2014, there was a 'remote control government' and you know who was in control. In those 10 years, those sitting in Delhi tried to damage the interest of Gujarat and acted as if the state is not in India," Modi said.

"Our police officers, and even Amit Shah, were thrown behind bars. They (UPA) employed all means to break the Gujarat government," Modi said, alluding to the time when he was chief minister of the state.

NaMo TV will have to follow silence period as per election law: Election Commission

The Election Commission of India (ECI) Wednesday concluded that the BJP-sponsored NaMo TV cannot display ‘election matter’ during the silence period prescribed in the electoral law in a particular phase of the poll, reported PTI. This phase is particularly called the ‘silence period’ as it allows a voter to make up his or her mind on whom to vote without being influenced by political campaigning. READ MORE HERE

Sadhvi Pragya to contest against Digvijaya Singh in Bhopal

BJP released its list of four candidates for the Lok Sabha Elections2019 in Madhya Pradesh. Sadhvi Pragya Singh Thakur, who joined the party today, will contest from Bhopal against Congress' Digvijaya Singh.

Officials of the Election Commission, drawn from its model code and legal divisions, are likely to watch the biopic on Prime Minister Narendra Modi Wednesday on the directions of the Supreme Court.

The EC has asked the producers of the film to arrange for a screening for a committee set up for the purpose. The Supreme Court on Monday directed the Commission to watch the full biopic on Modi and take an informed decision on banning its pan India release by April 19. (PTI)

Sharad Pawar hit back at PM Modi for his comments on the NCP chief at a rally in Madha today. Pawar said, "Modi Ji says 'Pawar Sahab is a good man but has family issues. His nephews are out of his hands.' I wanted to ask him what does he have to do with issues at my home? But then I realised I've my wife, daughter; son-in-law, nephews visit us, but he has no one. How will he (PM Modi) know how to run a family? That's why he peeps in others' homes. I can say more also but I don't want to stoop to low-level."

Lok Sabha Elections 2019 LIVE updates: On a recommendation from the Election Commission, elections in the state's Vellore Lok Sabha constituency stands cancelled over abuse of money power, whereas polling in East Tripura has been deferred to April 23.

Speaking to reporters in a late-night briefing, CEO Taranikanti said the Election Commission has deferred polling at East Tripura constituency in the second phase of Lok Sabha elections on security grounds. The voting will now be held on April 23, and the state electoral authority has been instructed to ensure proper security conditions to build confidence among the voters.

“Everyone saw what happened during polling on April 11. I have travelled different districts. I have seen videos where activities were seen which were against the rules of Election Commission of India. We have forwarded those details to the Election Commission as well. We hope to develop law and order situation conducive for holding the elections April 23,” the CEO added.