Lok Sabha elections 2019 HIGHLIGHTS: Releasing a list of 29 candidates for Uttar Pradesh and West Bengal, BJP Tuesday declared that former Samajwadi Party MP Jaya Prada would contest upcoming Lok Sabha elections 2019 from Rampur and swapped constituencies of Union Minister Maneka Gandhi who will be contesting from Sultanpur and her son Varun Gandhi who will now be fighting from Pilibhit.

Congress president Rahul Gandhi is in Rajasthan today. Addressing a rally at Suratgarh town in Sriganganagar district and Bundi, Gandhi took on Prime Minister Narendra Modi on several fronts, including poverty, Rafale deal and the BJP’s mainhoonchowkidar drive. Rajasthan, which has 25 Lok Sabha seats, will go to polls in two phases on April 29 and May 6. Meanwhile, Delhi Congress chief Sheila Dikshit Tuesday lauded Rahul’s minimum income guarantee programme announcement saying “it is one of the biggest decisions ever taken to benefit the poor”. Click here for more election news

In Uttar Pradesh, BJP President Amit Shah addressed a ‘Vijay Sankalp rally’ in Moradabad district and hit out at rival parties over their comments on the Balakot airstrike and urged them to not insult the Indian Armed Forces.

As the day progresses, we’ll bring you the latest election news from across the country, and some analysis of the events. Elections for the 17th Lok Sabha will be held in seven phases, between April 11 and May 19. The results will be declared on May 23.

Wanted Amit Shah to contest from UP: Yogi Adityanath

We wanted Amitbhai (Shah) to contest from Uttar Pradesh, but he said that he will contest from Gandhinagar, Gujarat only: UP CM Yogi Adityanath in Ghatlodia area of Ahmedabad while launching Amit Shah's election campaign @IndianExpress

PM is cure for all problems in country: Rajnath Singh

Home Minister Rajnath Singh hit out at Rahul Gandhi's jibe 'chowkidar chor hai' against Narendra Modi saying, the prime minister was "pure and the only cure" for all problems of the country.

"Chowkidar is not a thief, but pure. He is the only cure for all problems of country. He will become prime minister again for sure," Rajnath said while addressing an election rally in northeast Delhi's Yamuna Vihar.

"Now the Congress is asking how many (terrorists) were killed in Pakistan. The brave armed forces don't count bodies. This is for the others to do," he said. "During the UPA government's tenure, the Indian Army would hoist a white flag whenever the Pakistani forces violated the cease fire at the border. During my tenure as home minister, I gave orders that if Pakistan fires one bullet, then you fire as much as you can," he said.

"I'm feeling happy, I'm thankful to Amit Shah ji and Modi ji for having the confidence in me & giving me this seat. Rampur has always given me love and affection, the people love me with all their hearts, It feels like I'm going back home," Jaya Prada said after BJP released its list of 29 candidates.

Amit Shah to file nomination for Gandhinagar on March 30

Union Minister of State for Agriculture and Farmers' Welfare, Parshottam Rupala starts addressing Vijay Sankalp Sammelan election meeting of the BJP in Rajkot. Amreli district was not on the map of broad gauge railway line of the country. We were always told that the broad gauge line in the district was not viable. But Suresh Prabhu made it viable and put Amreli onboard gauge map: Rupala

"Rahul often raises Rafael issue & says there's Rs30000 crore corruption. Ambani has been given contract worth Rs800 crore only. Where is the question of corruption of Rs30000? 199 others have been given similar work but Rahul targets Ambani because he's Gujarati," Rupala said.

Rahul will never raise the question about 199 others whom the company has given contracts. When one prepares the list of 20 top industrialists, would Ambani not figure in it? Wouldn't he figure in top 10? And Ambani didn't establish his empire in Modi era. Ambani developed his business empire during Congress regimes, Rupala said. 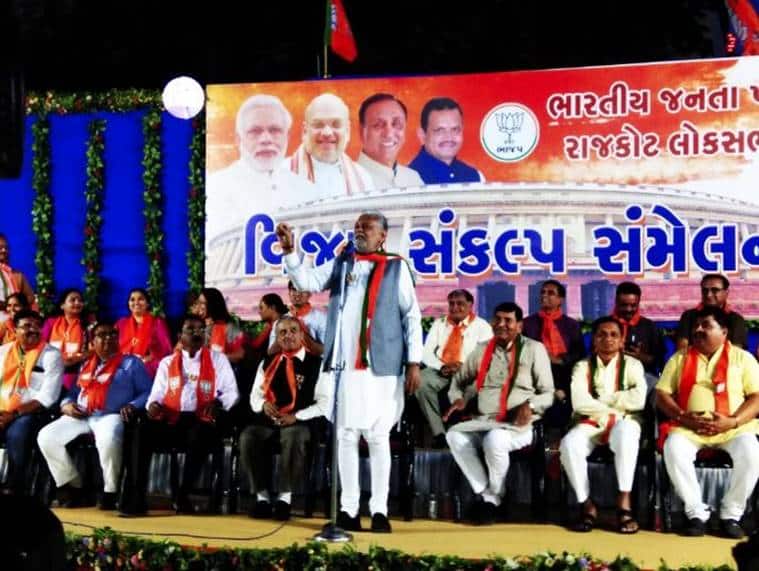 Congress does not want poverty in India: Rahul Gandhi in Jaipur

Rahul Gandhi addresses the Booth Workers Meeting in Jaipur and reiterated the minimum income scheme which would credit people's bank account with Rs. 12,000 per month, resulting to Rs. 72,000 yearly. The scheme is implemented for the 20 per cent of people who are living in poverty, Gandhi said. "There's no truth in his (Modi) speeches because in the end, the truth prevails. Modi said his party would provide people with 15 lakhs in their bank accounts. In order to implement their idea, we worked on it for 6 months," Gandhi said.

"Today, the slogan of 'Acche Din Aayenge' has changed to 'Chowkidar Chor Hai'. All we had to do was place the truth on Rafale deal in front of the people of India," said Gandhi. A dozen Independent MLAs in Rajasthan have joined the Congress party in the presence of party chief @RahulGandhi in Jaipur. @IndianExpress

The Samajwadi Party (SP) releases another list of candidates, which includes Devendra Yadav contesting from Etah, Hemraj Verma from Pilibhit and Anand Sen from Faizabad. 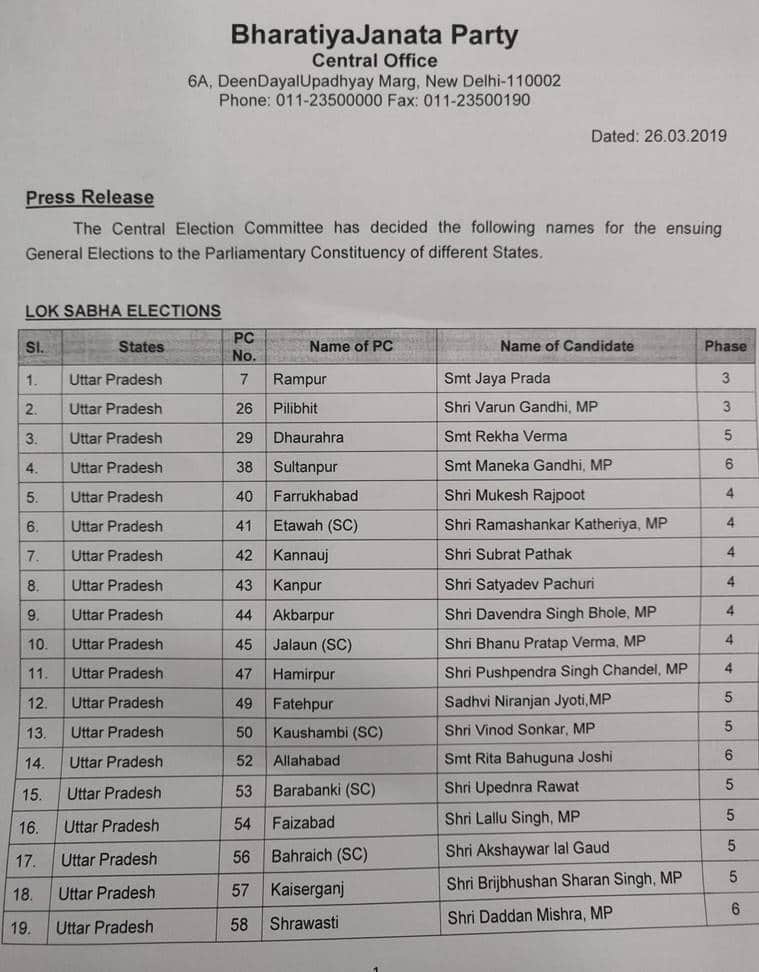 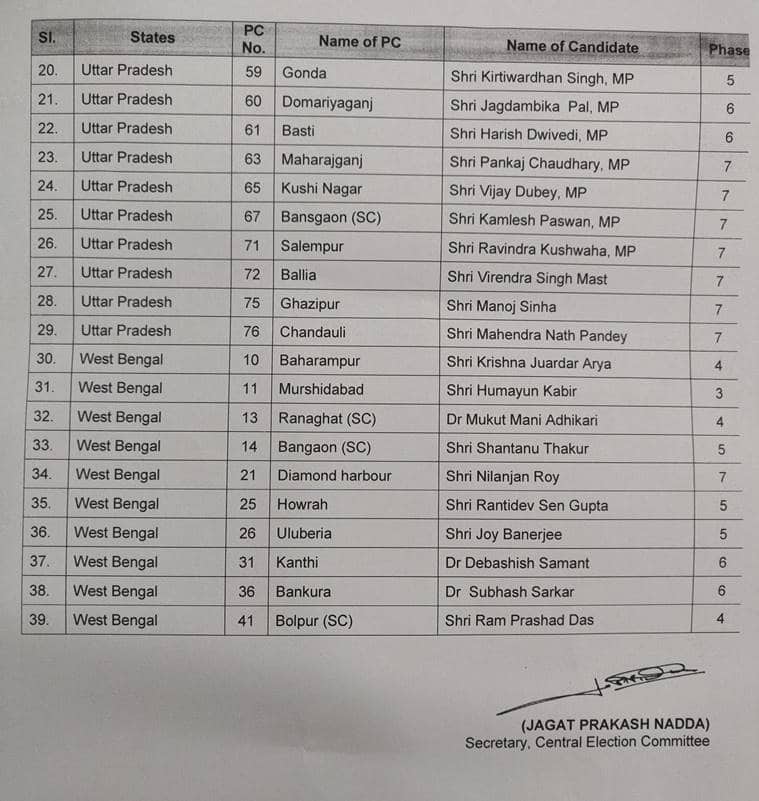 Modi to address rallies in UP, J-K on March 28; Cong to canvass in Chhhattisgarh from Aprill 11

Modi is scheduled to address his party's campaign and rallies in Meerut in Uttar Pradesh, Rudrapur in Uttarakhand and Jammu in Jammu and Kashmir on March 28 and public meetings in Andhra Pradesh, Odisha and Telangana on March 29.

All the constituencies where Modi will speak are going to polls in the first phase on April 11.

While, Congress national leader Sonia Gandhi, Rahul Gandhi and Priyanka Gandhi will canvass for the party in Chhattisgarh, which goes to polls in three phases between Aprill 11 and 23.

Rebel BJP MP Shatrughan Sinha, known for his sharp criticism of Prime Minister Narendra Modi and the party, is set to join the Congress on Thursday. The development comes after BJP decided to field Union minister Ravi Shankar Prasad from Bihar’s Patna Sahib seat, where Sinha is the sitting MP.

A few days back, Sinha had hinted he would not be working under Narendra Modi anymore, tweeting an Urdu verse that implied the Prime Minister may not have a dearth of admirers but the dissident BJP leader would not be one of them. READ MORE There will be no development in India, unless you don't give money to poor: Rahul Gandhi in Rajasthan

"Unless you do not give money to the poor, there will be no development in India. PM Modi did not understand this process," said Congress President Rahul Gandhi while addressing the JanSankalpRally in Bundi, Rajasthan.

Hitting out at various issues like demonetisation, Gabbar Singh Tax (GST), "Instead of doing their business, people filling up GST forms," Gandhi said.  He further reiterated his party's promise to introduce Minimum Income Scheme once voted to power. In bank accounts' of the 20 per cent of the nation's most poor population, Gandhi vouched to provide Rs. 72,000 per year. Gandhi said the scheme will first exclusively be launched for women across the nation.

"We have won several wars against Pakistan, no Prime Minister before took credit for it. Instead, every PM lauded the Armed forces, however, Modi said that he was responsible for it," Gandhi said. Nation needs a PM who can instill fear into hearts of our enemies, says Shah

Hitting out at rival parties, BJP President Amit Shah today requested political parties to stop insulting Indian Armed Forces. Further Shah hit out at Sambit Patra's comment on Balakot airstrike saying if our enemies attack us, we will retaliate at a greater measure.

Praising the governance in Uttar Pradesh under Yogi Adityanath's rule, Shah said the rate of women harassment has gone down in the two years "Why have so many adjournments been taken for something which is an important issue? Why are you (ECI) apprehensive to pass an order," a bench of Chief Justice Naresh Patil and Justice N M Jamdar asked the ECI.

The bench is hearing a Public Interest Litigation (PIL) filed by lawyer Sagar Suryavanshi seeking directions to the ECI to regulate fake news in the form of paid political ads on social media.

BJP releases the list of 42 campaigners from Bihar for phase 1 and 2 of the polls.

Senior Congress leader Sheila Dikshit said people who do not have a source of income will receive Rs 6,00 per month in their bank account through the minimum income scheme which was introduced by Congress chief Rahul Gandhi.

"People across the nation have appreciated the scheme and we welcome it," said Dikshit.  READ MORE Congress president Rahul Gandhi Monday said nearly 25 crore poor people in the country will get financial assistance of Rs 72,000 per annum if the party is voted to power. His statement, however, was slammed by BJP in a press conference later as Union Finance Minister Arun Jaitley calling it a “bluff announcement”. Jaitley said the Congress has a “history of swindling people in name of poverty alleviation” while the Modi-led government has “already given the poor what Congress promises”.

“Today, the Congress president has announced that those whose income is below Rs 12,000 per month would be given a subsidy to ‘attain’ that income subject to Rs 6,000 per month. This announcement is an admission of the fact that neither Indiraji nor her son and certainly not the UPA government controlled by her descendants was able to remove poverty,” Jaitley wrote in a blog posted Monday afternoon.