Election 2019 Highlights: Congress has declared names of its candidates for six out of seven constituencies in Delhi. Delhi Pradesh Congress Committee president Sheila Dikshit will contest from North East Delhi while J P Aggarwal has been given the charge of Chandni Chowk.

EC barred Sidhu from campaigning for 72 hours over his communal remarks. (File)

Election 2019 Highlights: A day before the country goes to vote in the third phase of Lok Sabha elections, BJP national president Amit Shah accused the West Bengal government of throttling democracy in the state. At a press conference in Kolkata on Monday, Shah urged the people of the state to vote without fear. “The election commission has deployed central security forces in Bengal,” he said, adding free and fair elections will be held in the state. Shah is in Bengal to address rallies in four districts —Howrah, Nadia, Birbhum and East Bardhman.

Meanwhile, after apologising to the Supreme Court earlier in the day, Rahul Gandhi repeated his “chowkidar chor” jibe in Amethi rally and was slammed by Defence Minister Nirmala Sitharaman. She said Gandhi has learnt no lessons and has lost his credibility. Prime Minister Narendra Modi too took a dig at Congress saying that some experience electric current the moment he talks about dynasty, national security. “Opposition is worried as BJP is ahead in trends of first two phases of Lok Sabha polls,” he added.

The Congress also declared names of its candidates for six out of seven constituencies in Delhi. Delhi Pradesh Congress Committee president and former chief minister Sheila Dikshit will contest from North East Delhi while J P Aggarwal is in the fray from Chandni Chowk.

The Election Commission of India Monday barred Punjab minister Navjot Singh Sidhu from campaigning till 72 hours, effective from April 23, 10 am, for appealing Muslims "to vote unitedly". Sidhu made these comments at a public meeting in Katihar district of Bihar, which went on polls on April 18. Read more

SRK urges people to vote in a video

Actor Shah Rukh Khan joined the league of Bollywood stars who have been encouraging Indians to vote in the ongoing Lok Sabha elections. SRK on Monday shared a video urging the citizens of the nation to exercise their ballot and choose a responsible government. This is probably the first time he has crooned for a video issued in public interest. The song titled “Karo Matdan” has some catchy and fun lyrics like “Hum desh ki awaaz, desh ke deewane. Janta taiyaar apna faisla sunane.” In the song, he tells everyone to vote for a government that loves the country and its citizens more than themselves. Composed by Tanishk Bagchi and written by Abby Viral, the over-a-minute long song has been sung by Shah Rukh Khan himself.

Senior Congress leader Digvijaya Singh, while addressing a public rally in Bhopal, asked the crowd if they got Rs 15 lakh in their respective accounts, as promised by Prime Minister Narendra Modi. To answer his question, a youth walked up to the stage and replied by saying, “Modi ji carried out surgical strikes and killed terrorists.” But before the youth could say anything more, he was taken off the stage by Singh’s supporters.

Not ashamed to call myself 'nai' (barber): Jawed habib

"I am happy to join the BJP as I have seen the changes brought brought in the country by Prime Minister Modi in the last five years. I think nobody should be ashamed of their background, when the prime minister is proud to state that he was a 'chaiwala' then why should I be ashamed of calling myself a 'nai' (barber)," he said.

Visit the constituency and see the reality for yourself: Smriti Irani to Priyanka Gandhi

Responding to Priyanka Gandhi, Union Minister Smriti Irani asked the Congress leader to go see the reality of the poor in the constituency, saying, "I have been an actor, so it is better that Priyanka Gandhi can end the drama. As far as the poor citizens, who do not even have shoes to wear, are concerned, please oblige us if you have any shame and go and see the reality yourself."

Priyanka Gandhi lashes out at BJP's Amethi candidate Smriti Irani for distributing shoes to people in the constituency. "Smriti Irani came here and distributed shoes so that she can say that people here do not even have footwear. She is thinking that she is insulting Rahul Gandhi like this but she is actually insulting the people of Amethi by doing so."

BJD writes to Election Commission questioning its inaction against BJP leader Dharmendra Pradhan, who allegedly 'obstructed flying squad on election duty from discharging their duties and abused them.'

BJD in letter to Chief Electoral Officer, Bhubaneswar: It's unfortunate that a State Min is arrested for 'obstructing flying squad on election duty from discharging their duties', while Union Min Dharmendra Pradhan is allowed to go scot-free&no action is taken against him.#Odisha pic.twitter.com/TSJ60e4srz

You can do ‘Ilu Ilu’ with Pakistan, but we will respond to them with bullets: Amit Shah to Mamata

Accusing TMC chief Mamata Banerjee of questioning the air strikes to "appease" her minority vote bank, BJP chief Amit Shah on Monday said she can do "Ilu Ilu" (I love you) with Pakistan but if that country fire bullets on us we would respond with cannon balls. 'Apko (Mamata) Pakistan ke saath ilu ilu (I love you) karna hain toh kijiye. Lekin agar Pakistan goli marega toh hum gola marenge' (If you are interested in showing love with Pakistan, you can do that but we would respond to their bullets with canon balls), Shah said, referring to the popular Hindi song from a film in the early 1990s. Shah further demanded TMC chief Mamata Banerjee to clarify whether she too favoured a separate prime minister for Jammu and Kashmir like her ally National Conference leader Omar Abdullah. Read More

BJP to scrap Art 370 in J&K introduce NRC in the country: Amit Shah

BJP president Amit Shah, who was in West Bengal to address election rallies, Monday said his party will scrap Article 370 of the Constitution which grants special status to Jammu and Kashmir and introduce National Register for Citizens across the country after returning to power. Shah accused TMC supremo Mamata Banerjee of questioning the air strikes to "appease" her minority vote bank and wryly said she can do "Ilu Ilu" (I love you) with Pakistan but if that country fire bullets on us we would respond with cannon balls. 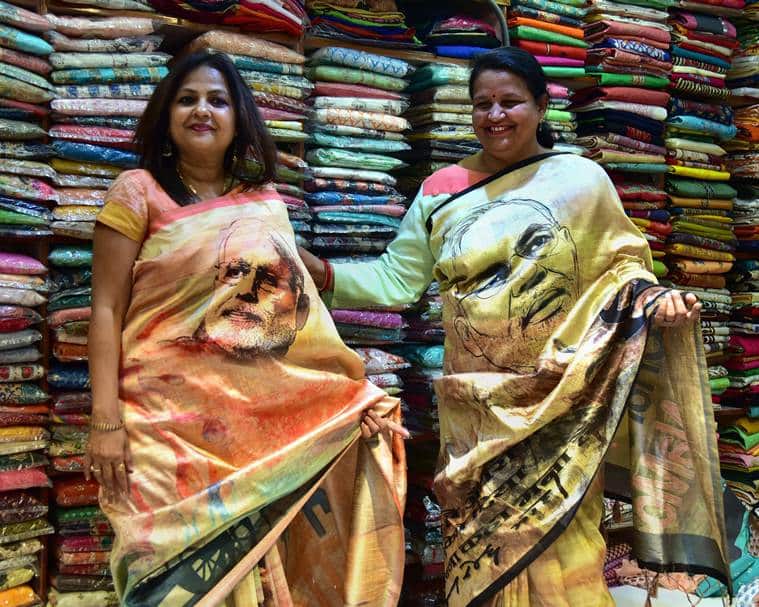 Reservations won't be scrapped till I am here: PM Modi in Maharashtra

Prime Minister Narendra Modi Monday accused the opposition parties of spreading rumours that reservations will modified if he returns to power. Addressing a poll rally here in north Maharashtra, Modi said he will ensure that the quota quantum is not disturbed. "Till Modi is here, nobody can touch the reservations, given to us by Dr Babasaheb Ambedkar," he said. Modi also assured people in the tribal dominated constituencies in north Maharashtra that his government will ensure they would not face eviction from their land. (PTI)

Rahul Gandhi challenges PM Modi for a debate on corruption

Congress President Rahul Gandhi in Raebareli: I would like to challenge Narendra Modi to debate with me on corruption for 15 minutes. Dudh ka dudh, pani ka pani ho jayenga. I am telling you, Narendra Modi Ji won't be able to show his face before the nation. pic.twitter.com/Ic3K317fq2

EVMs distributed to staffers in Pune

The electronic voting machines were distributed to the staffers at six locations in Pune. Voting for Pune constituency is on Tuesday, April 23. The material was being taken to polling stations through GPS installed PMPML buses.  (Express Photo By Pavan Khengre) 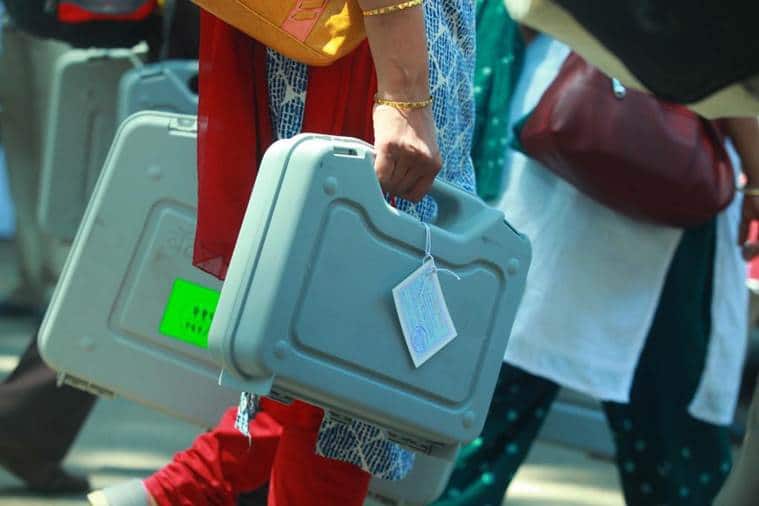 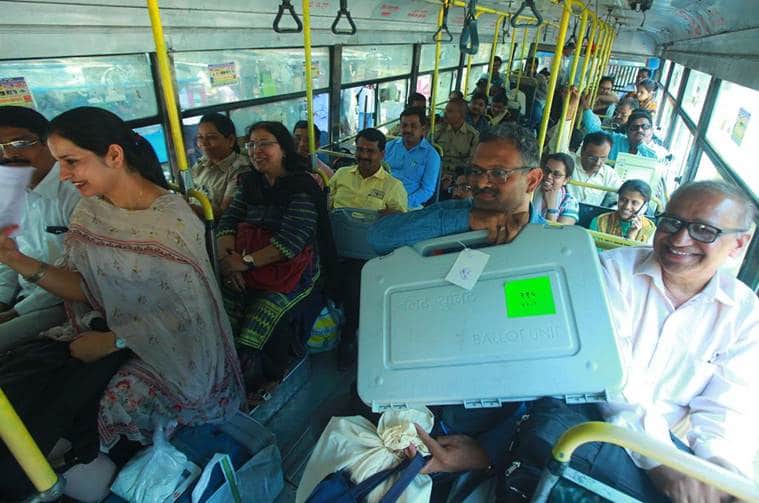 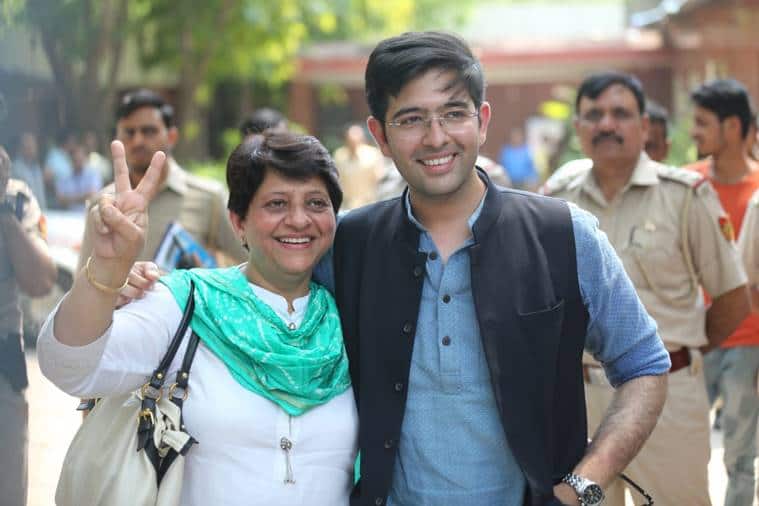 Won't allow reservations to be scrapped, Modi in Maharashtra

Won't allow reservations to be scrapped, says  Modi in a public rally in Nandurbar, Maharashtra.

In a press conference, Sitharaman, Minister of Defence,  said, Rahul Gandhi has learnt no lessons. "He is peddling lies and has lost credibility," she said.

After apologising to Supreme Court, Rahul repeats 'chowkidar chor' jibe in Amethi rally and gets slammed by Nirmala Sitharaman. 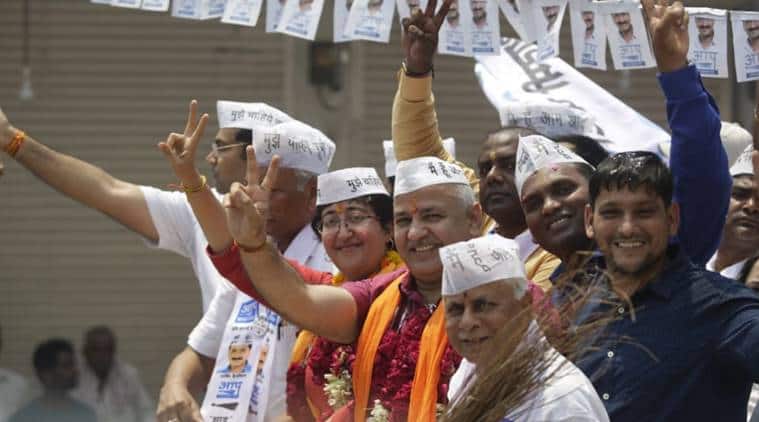 It's quite clear that Mamata is bound to lose in the elections: Amit Shah

After two phases of election in West Bengal, it's quite clear that Mamata is bound to lose in the elections. This has led to her desperation & hence she is blaming opposition & the ECI. The voters of Bengal should freely exercise their right to vote: Amit Shah 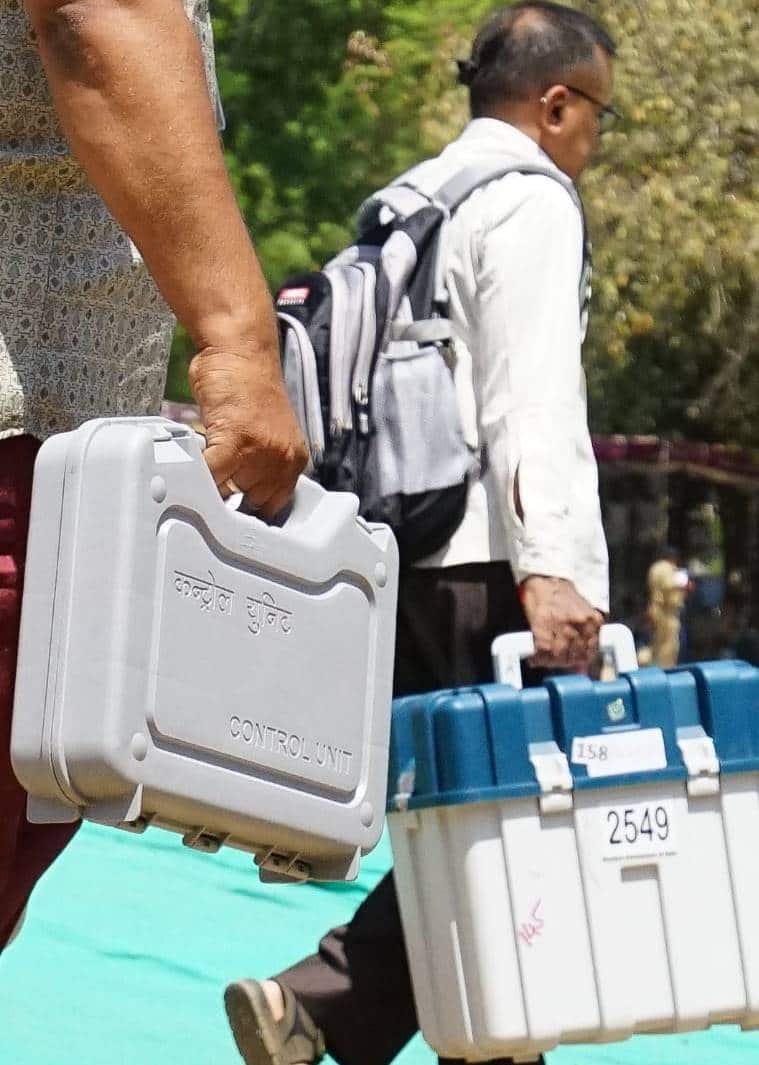 Chowkidar (PM Modi) has taken away whatever we had given to you: Rahul Gandhi

"In five years, the chowkidar (PM Modi) has taken away whatever we had given to you," says Rahul Gandhi in Amethi.

Opposition worried as BJP ahead in trends of first two phases of Lok Sabha polls, said Modi.  He also took a dig at Congress that some experience electric current the moment he talks about dynasty, national security.

Today every terrorist knows that if he causes bomb blasts in any part of the country, Modi will find him out from the grave and punish him, says PM Modi in Dindori.

Addressing a poll rally in Patan on Sunday, Prime Minister Narendra Modi once again mentioned about the Balakot airstrike and said that he had warned Pakistan of consequences if it did not return Indian Air Force (IAF) Wing Commander Abhinandan Varthaman. He said a “senior American official” had said India was “ready with 12 missiles”, and there would be a “qatal ki raat” (night of murder).

Addressing a poll rally here in Gujarati, Modi, while referring to the Balakot air strike, said: “The second day, Pakistan thought to experiment in order to please their people, so they flew their aircraft. But we immediately did a dhamaka and destroyed one of their aircraft… They trembled… Our pilot was caught, they thought they got something by chance. So they (Opposition) said what about our pilot’s life, they forgot about this major attack a day before… But in the afternoon we said at the press conference, Pakistan beware, if our pilot is harmed, then don’t tell the world what Modi did to you,” he said.

All the 26 constituencies of Gujarat are going to polls on Tuesday, for which Sunday was the last day of campaigning.