Lok Sabha Elections 2019 Highlights: Congress on Tuesday released a list of nine candidates in Kerala (2) and Maharashtra (7) for the upcoming Lok Sabha elections. With this, the party has announced the names of 146 candidates so far.

Lok Sabha Elections 2019 Highlights: Congress on Tuesday released a list of nine candidates in Kerala (2) and Maharashtra (7) for the upcoming Lok Sabha elections. With this, the party has announced the names of 146 candidates so far. This time, Congress has decided to field Shanimol Usman as its candidate from Alappuzha Lok Sabha constituency, where KC Venugopal is the sitting MP. Meanwhile, the BJP Central Election Committee (CEC) meeting ended at the party headquarters in Delhi well after midnight.

Ahead of the floor test to elect its state leader, Goa Governor Mridula Sinha Tuesday called for a special Assembly meeting tomorrow. Hours after Pramod Sawant took oath as the Chief Minister of Goa, he asked the Governor to summon the Assembly for a floor test on Wednesday to prove the majority of the BJP-led coalition government.

Meanwhile, in Maharashtra, SP-BSP announced their alliance and declared to contest all 48 seats in Lok Sabha, while CPI(M) in West Bengal announced candidates for 38 Lok Sabha seats.

Meanwhile, in the capital, Aam Aadmi Party made a fresh bid to forge an alliance with the Congress in Punjab, Haryana and Delhi. AAP has demanded five seats in the national capital, PTI quoted sources as saying. AAP leader Sanjay Singh discussed the proposal with NCP president Sharad Pawar. AAP wants to contest on three seats in Punjab, two in Haryana and five in Delhi. "It is now up to the Congress to take the decision. We have learnt that the party is also willing to forge an alliance with the AAP in Delhi," the sources said.

IAMAI, social media platforms to come up with ‘Code of Ethics’ tomorrow

Following its meeting with representatives of Internet companies on Tuesday, the Election Commission said the Internet and Mobile Association of India (IAMAI) — which is representing Facebook, Twitter, Google, WhatsApp and ShareChat — had agreed to come up with a ‘Code of Ethics’ for social media platforms laying down operational details by Wednesday evening. READ THE FULL STORY HERE

The BJP Central Election Committee (CEC) meeting is still underway at the party headquarters in Delhi. The saffron party is expected to announce its first list of Lok Sabha candidates after the meeting.

#InsideVisuals from the BJP Central Election Committee (CEC) meeting which is still underway at the party headquarters in Delhi. pic.twitter.com/JHiM81NSnW

Congress on Tuesday released a list of nine candidates in Kerala (2) and Maharashtra (7) for the upcoming Lok Sabha elections. With this, the party has announced the names of 146 candidates so far. All sitting BJP candidates to lose their tickets

BJP announces that all sitting BJP candidates will lose their tickets which would include the likes of Dinesh Kashyap, Abhishek Singh, union minister for steel Vishnu Dev Sai and eight-term MP Ramesh Bais.

Congress has officially conveyed to us there will be no alliance: Kejriwal

Delhi Chief Minister Arvind Kejriwal said Congress has officially conveyed that there will be no alliance in the national capital, ANI reported. While addressing a Jan Sabha in Delhi's Laxmi Nagar, Kejriwal attacked Congress and BJP and accused them of betraying people and urged them to not vote for a prime minister, instead asked people to vote for Delhi statehood.

Rant about no development in 70 years has an expiry date: Priyanka Gandhi in UP

Congress leader Priyanka Gandhi Tuesday said the reality is different from what Uttar Pradesh government has been exhibiting and there is an expiry date to the "rant" that nothing was done in the past 70 years, reported PTI.

"There is a big difference between poll promises and fulfilling them. As far as the rant about (no development in) 70 years is concerned, it has an expiry date. You are in the government for the past five years, what have you done in five years?" she asked while interacting with reporters at a guest house in Bhadohi district, Uttar Pradesh.

BJP to drop all 10 sitting MPs from Chhattisgarh

During its CEC meeting, BJP today decided to drop all 10 sitting MPs from Chhattisgarh, said BJP General Secretary Anil Jain, who is also in charge of the state, PTI reported.  He said the party has decided to face the Lok Sabha elections with "new candidates and fresh energy" in order to emerge victorious under the leadership of Modi.

Jain said the state BJP had made the proposal to drop the MPs to the Central Election Committee (CEC) of the party, which approved.

Former Chief Minister Raman Singh is likely to be the party's candidate from Rajnandgaon, sources said.  The state sends 11 MPs to the Lok Sabha.

Do not indulge in political propaganda involving Defence Forces: EC

Political parties and candidates have been advised by the Election Commission to refrain from indulging in political propaganda involving activities of the Defence Forces. 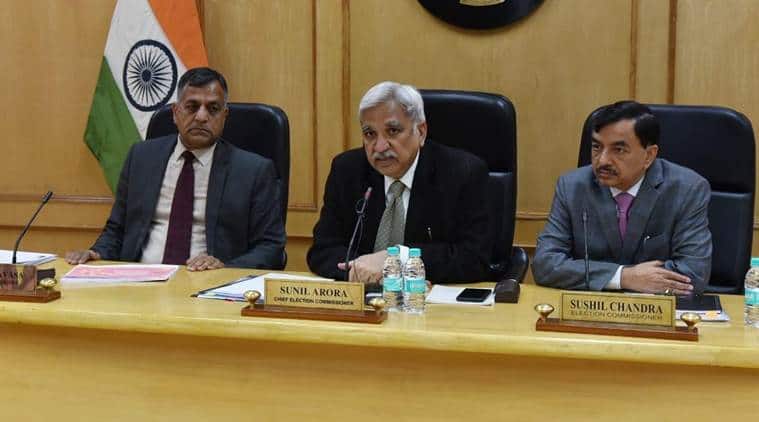 Goa governor Mridula Sinha calls a special session of Assembly tomorrow, in the wake of a floor test scheduled for Wednesday in Goa to elect its chief minister. Hours after taking oath as the CM of Goa, Pramod Sawant Monday said he had asked the Governor to summon the Assembly for a floor test on Wednesday to prove the majority of the BJP-led coalition government.

BSP-SP alliance in Maharashtra will have no impact on Cong-NCP: NCP

Speaking over BSP-SP alliance in Maharashtra, Congress said the development would not have any adverse impact on the electoral prospects of the Congress-NCP combine.

"Just like the Shiv Sena and the BJP, the alliance between the Congress and the NCP is sealed. Smaller outfits like the PWP and those believing in the ideology of Mahatma Phule and B R Ambedkar have joined hands with us," said NCP spokesperson Nawab Malik.

On his visit to China, Modi did not talk about Doklam: Rahul Gandhi Itanagar

"During Xi Jinping's meeting with Modi in India, the prime minister was seen sitting with him over a cup of tea without uttering a single word on the boundary dispute. Even during his (Modi) visit to China he never took up the Doklam issue," Gandhi told an election rally in the Arunachal Pradesh capital, PTI reported. 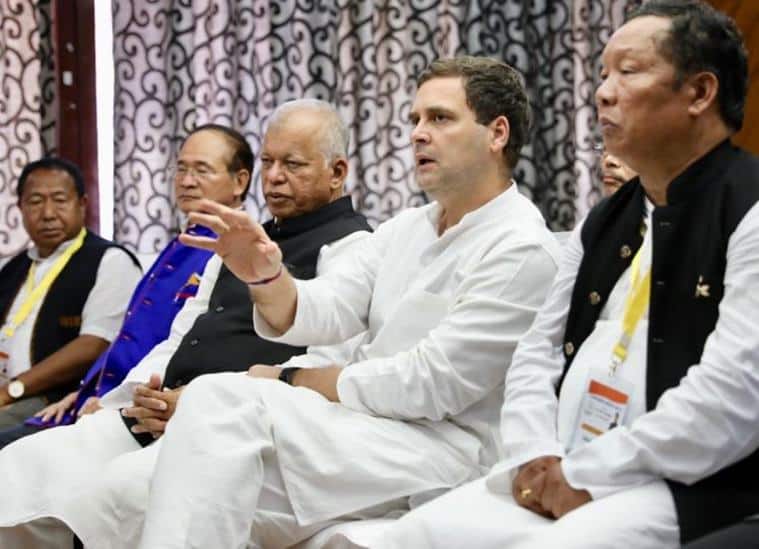 Mulayam Yadav forged an alliance with BSP, I only had to mend it: Akhilesh Yadav

Samajwadi Party chief Akhilesh Yadav said his father and party patriarch Mulayam Singh Yadav had forged an alliance with the BSP and he only ha to "mend it".

"Netaji (Mulayam) had relations with the BSP and had forged an alliance earlier. I only had to mend the relationship," Akhilesh Yadav said, replying to questions during a TV programme.

Yadav further said, it is not time yet for his father to become the prime minister.

"We hope good sense will prevail and the Congress will realise the need for maximum pooling of anti-BJP and anti-TMC votes in the state. We will wait for their response," Left Front chairman Biman Bose said.

Priyanka Gandhi Vadra waves at her supporters during 'Boat pe Charcha' as she starts her party's campaign for the Lok Sabha elections in UP. (PTI)

Congress president Rahul Gandhi on Monday said Prime Minister Narendra Modi, who sought votes in the 2014 elections to serve as “chowkidar” (watchman) of the country, is now making chowkidars of the whole of India after “he has been caught stealing”.

Priyanka, meanwhile, asked the people to “wake-up and become aware” of their rights, and that neither the government nor the country is anyone’s “jageer” (fiefdom) and hence no one should be made to beg for their rights. Without taking Modi’s name, she asked whether the promises made by one, who has the government in the country and talked of providing jobs and giving Rs 15 lakh to each account, have been fulfilled. On Monday, 47-year-old leader, took jibes at Modi's “Mai Bhi Chowkidar’ campaign“, claiming that “Chowkidars are for the rich and not the farmers”. The entourage stopped at four ghats in Prayagraj before ending day one at Sitamamarhi, another religious destination, where she was greeted with religious chantings.

Before starting her 'boat-yatra' Priyanka Gandhi Vadra, wrote an open letter to the people of the state saying that she would take the help of “Gangaji” (Ganga River) to reach their doorsteps and establish “saccha samvaad” (truthful dialogue) to bring “political change”.

Referring to the Ganga River as the symbol of “Sacchayi” (truth) and “Sammanata” (equality) and also symbol of our “Ganga-Jamuni culture”, Priyanka said she was taking the river’s help to reach to the people.

Meanwhile, Congress is still trying to chalk out the seat-sharing arrangement in Bihar and West Bengal. At stake in these two states are 82 Lok Sabha seats, crucial for the Opposition bid to upstage the BJP from power.