Lok Sabha Elections 2019: Upping their attack on Prime Minister Narendra Modi before the general elections, the Congress Wednesday accused Modi of snoozing when fugitive diamantaire escaped from the country. The reaction came on the heels of the arrest of Nirav Modi in London. In a tweet, Congress spokesperson Randeep Surjewala said Nirav Modi, who he referred to as “Chhota Modi”, was arrested after the Opposition party questioned “Bada Modi”, a term he has been using to target the PM.

Earlier, Congress president Rahul Gandhi Wednesday said that nearly 1 crore youths lost their jobs in 2018 alone under the Modi government and appealed people to fight an ideological battle against the BJP in the upcoming Lok Sabha polls. Addressing a gathering at Khumpui Academy Grounds in Khumulwng, 25 Km from Agartala city, Gandhi said, “1 crore youths lost jobs in 2018 alone. 3,000 people are losing employment every single day in the country now. There are 7.5 lakh unemployed youths in Tripura alone. Nothing was done for them.”

Meanwhile, RJD leader Tejashwi Yadav said on Wednesday that the ‘Mahagathbandhan’ or Grand Alliance in Bihar is intact and its candidates for all the 40 Lok Sabha seats in the state will be announced after Holi, PTI reported.

Highlighting the farmers’ issues and unemployment in the Jamnagar constituency of Gujarat, Congress leader Hardik Patel Wednesday pushed his candidature for the upcoming Lok Sabha elections from the seat. This is for the second time in as many days that Patel has expressed his wish to fight Lok Sabha elections from Jamnagar constituency. Read More

The delegation comprising the Leader of Opposition in the Delhi Legislative Assembly Vijender Gupta, party MP from South Delhi Ramesh Bidhuri and other leaders including Subhash Arya, Subhash Sachdeva and Rajiv Babbar submitted a memorandum against the "misinformation campaign" by the AAP through its call centres.

"We submitted a memorandum against efforts of the AAP to disturb communal harmony, peace and goodwill by playing the religious card. More than a dozen complaints and three CDs against call centres were also submitted.

"We demanded a strong deterrent action against AAP Convener Arvind Kejriwal and other leaders," Gupta said.

One who doesn’t have lineage what can he do: Congress on PM’s ‘dynasty politics’ remark

Hitting out at Prime Minister Narendra Modi for his repeated attacks on Congress about dynasty politics, senior Congress leader Ghulam Nabi Azad on Wednesday said “what can a person do who doesn’t have any lineage”. “Ab jinka wansh hi nahi ho woh kya karengey (What one will do who does not have a family),” said Azad when his attention was drawn towards PM’s statement that dynasty politics has led to an erosion of constitutional institutions in the country. Read more

Congress has surrendered to pro-separatist agenda of NC: BJP

The Jammu and Kashmir BJP Wednesday alleged that the Congress had conceded to the National Conference's (NC) pro-separatist agenda after the two parties announced a pre-poll alliance in the state, PTI reported.

The Congress and the NC finalised arrangements for the six Lok Sabha seats of the state earlier in the day.

"The NC-Congress alliance is an eye-wash and a wake up call for Jammu," BJP spokesperson Brig (retd) Anil Gupta told reporters.

"The Congress has not only surrendered to the National Conference but also conceded to the pro-separatist, Kashmir-centric, communal and divisive agenda of that party," he said.

The former deputy chief minister also said the list of candidates has been almost finalised and could be released Wednesday night.

Admitting his brother, Kalyan described his brother as his "political guru", saying he had a clear understanding of politics.

Nagendra Babu, popularly known as Nagababu, is the younger brother of Telugu film star and former Union Minister K Chiranjeevi while Kalyan is the youngest.

The ruling BJD in Odisha Wednesday ridiculed opposition BJP for its delay in announcing the candidates list for the Lok Sabha and assembly elections in the state, PTI reported.

Though BJD and Congress have already released the candidates' list for the first and second phase of polling on April 11 and April 18, the BJP is yet to announce to announce its nomination for even a single seat.

"Are they(BJP) looking for dissidents from other parties ?" BJD spokesman Sasmit Patra asked adding the last date for filing of nomination papers for the first and second phase of polls is scheduled for March 25 and 26 respectively.

Hitting the campaign trail here in the Cauvery delta heartland after announcing his party candidates on March 17, Stalin announced crop loan waiver for all sections of farmers and not only small and marginal sections.

"I have come here only after asking the party manifesto panel to release an amendment incorporating loan waiver for all sections of farmers," Stalin said.

RJD leader Tejashwi Yadav said on Wednesday that the 'Mahagathbandhan' or Grand Alliance in Bihar is intact and its candidates for all the 40 Lok Sabha seats in the state will be announced after Holi, PTI reported.  Read more

People have accepted the word 'Chowkidaar' in their vocabulary: PM Modi

Prime Minister Narendra Modi: "Maximum languages across the world have understood the word 'Chowkidaar', it seems as if they all have accepted it in their vocabulary."

Today the whole country is taking the oath of being a chowkidar: PM Modi

PM Modi: "Today the whole country is taking the oath of being a chowkidar... they are saying main bhi chowkidar."

PM Modi interacts with Chowkidaars all over India

Prime Minister Narendra Modi is interacting with over 25 lakh Chowkidars via audio bridge.

In a media advisory, the Aam Aadmi Party has urged the journalists to not attribute quotes to anonymous sources from the party.

AAP "media advisory": Journalists urged not to attribute quotes to anonymous sources from the party.
"The party takes exception to this and makes it categorically clear that the AAP will contradict and send rejoinders..." it says. @IndianExpress

Rahul Gandhi in Tripura: Amit Shah, who wants Citizenship Bill, has a murder charge against him

Rahul Gandhi in Tripura: "Supreme Court judges come out to press and say they are not allowed to work. They are not being allowed to investigate the death of Judge Loya. Amit Shah, who wants Citizenship Bill, has a murder charge against him."

Our government will add money to every citizen's account every month: Rahul Gandhi in Tripura

Addressing a rally at Khumulwng, 25 km from Agartala, Congress president Rahul Gandhi said, "Minimum wage line will be decided and the Indian government will put money into the bank accounts of each poor in India." 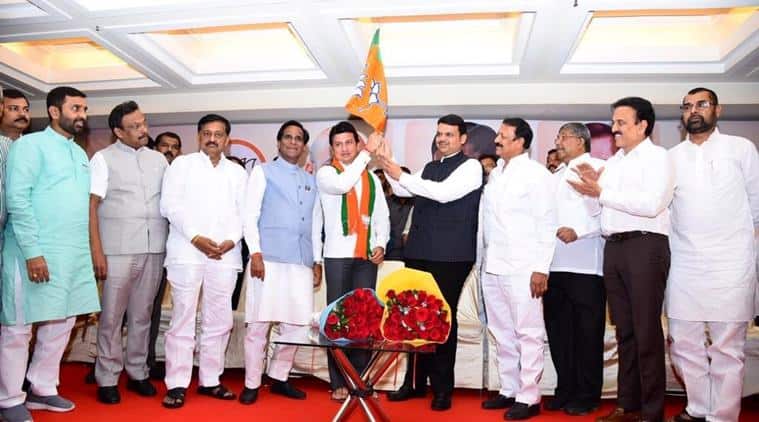 In an apparent hint to target the post of prime minister, BSP supremo Mayawati Wednesday asked her followers to not lose heart on her announcement to not contest Lok Sabha elections as there is provision at the Centre where a person has to be a Lok Sabha/Rajya Sabha member within 6 months of holding office of a minister/PM.

Earlier on Wednesday, Mayawati had said that announced that she would not contest the Lok Sabha elections, citing "current political situation" for her decision.

When I became UP CM first time in 1995 I was not member of either UP Assembly or Council. Similarly is provision at the Centre where a person have to be a LS/RS member within 6 months of holding office of minister/PM. Don't disheartened from my decision not to contest LS poll now

I thought India was producing 450 jobs a day.

BJP will contest on 14 seats in Kerala while its allies BDJS and Kerala Congress will contest on 5 and 1 seats respectively, PTI reported BJP National General Secretary Muralidhar Rao as saying. The National Conference (NC) and the Congress also finalised an alliance in Jammu and Kashmir. NC Chief Farooq Abdullah said, " Jammu and Udhampur will be contested by Congress, I will contest from Srinagar." He also added that there will be a friendly contest between NC and Congress in Anantnag and Baramulla.

Addressing a rally in Imphal, Congress President Rahul Gandhi assured that "Citizenship amendment bill" will never be a law if Congress comes to power. He said, "Congress will never encroach upon the culture and history of the Northeast." Taking a dig on the Modi-led-BJP government, the Congress President, referring to the appointment of  Vice-Chancellor in Madhya Pradesh's Makhan Lal University, said: "universities cannot run on the basis of an ideology, it should run on independent ideas."  He also assured that the party will look into the "establishment of good quality educational institutions in Manipur."

In Arunachal on Tuesday, Congress president Rahul Gandhi attacked the state BJP governments and the Centre over the way they handled last month’s protests in the state against the proposal to issue Permanent Resident Certificates (PRCs) to certain communities.

Gandhi, while addressing a rally in Itanagar, said, “What is the need to shoot at your own people…If someone does not listen to what they say, they try to crush them. But they do not understand that they cannot crush India and the Northeast.”

Gandhi said that Congress would not allow any attack on the culture, language, and history of the people of the Northeast and claimed credit for blocking the Citizenship (Amendment) Bill —which has sparked protests across the Northeast — in the Rajya Sabha.

Meanwhile, the Aam Admi Party on Tuesday made a fresh bid to forge an alliance with the Congress in Punjab, Haryana, and Delhi. AAP has demanded five seats in the national capital.