Lok Sabha Election Results 2019: Now there are only two castes — one poor, another who wants to eradicate poverty, says PM Narendra Modi in victory speech. 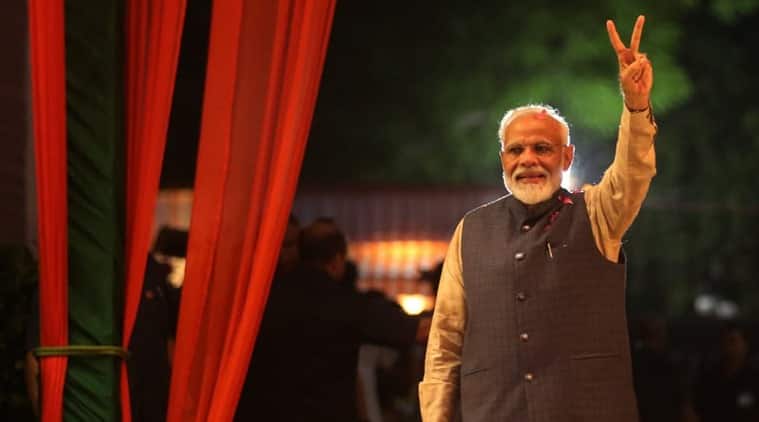 Riding a wave that swept aside a formidable Opposition alliance in Uttar Pradesh and breached a fortress in West Bengal, the Bharatiya Janata Party, under the leadership of Prime Minister Narendra Modi, returned to power Thursday for a second straight term with a record tally expected to cross 300 seats.

This was a moment in history — Modi became the first non-Congress full majority Prime Minister to get re-elected with a stronger majority, 48 years after incumbent Indira Gandhi pulled this off in 1971. And its significance wasn’t lost on anybody when Modi, accompanied by BJP president Amit Shah, entered the BJP headquarters to cheering by exuberant party workers. Lok Sabha elections results 2019: Full list of winners state-wise

Calling it a victory of democracy, Modi said: “I will not do anything with ill intention or bad desire. I may make mistakes. I will not do anything for myself but I assure you, every moment of my life and every cell in my body will work non-stop to ensure that the country keeps moving forward.”

Modi promised the bitterness exhibited during the campaign would be pushed behind. “Whatever happened during the election is behind me. We have to move forward, we have to take everyone along for the good of the country. We must remember the Constitution is supreme,” the Prime Minister amid chants of “Modi Modi” by party workers. 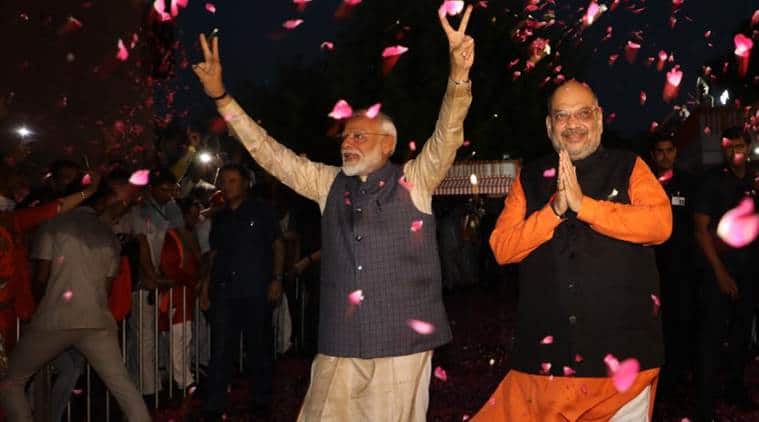 Drawing an analogy from the Mahabharata, Modi said, “Just like Lord Krishna said post Kurukshetra battle that he was on the side of Hastinapur, 130 crore Indians have said today, they are on the side of India.” Visibly overwhelmed with emotion, Modi told his party men: “In 2014 when I approached you did not know me, but in 2019, you gave me a bigger mandate when you started knowing me.. You filled this fakir ki jholi (poor man’s bag).”

READ | Rise and rise of Modi

Calling the victory an emphatic win over dynastic, cast and “appeasement” politics, Modi said to him there are only two castes, those who are poor and those who want to free them from poverty, and that he would work taking both the groups with him. 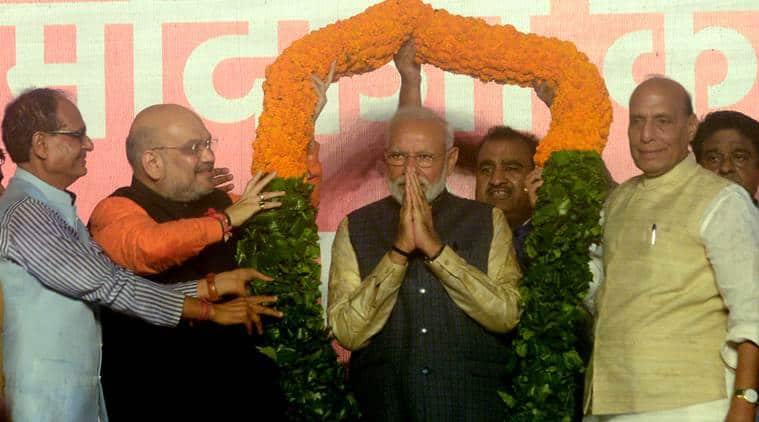 Lok Sabha Election Results 2019: Prime Minister Narendra Modi being felicitated with a garland by party president Amit Shah and other senior leaders during a Thanks to voters function at Party headquarters in New Delhi on Thursday. (ANI Photo: R. Raveendran)

Modi took a swipe at the Opposition parties who have been trying to bring together a secular front to fight against the BJP. He said the results have “unmasked” the faces of political parties who wore the masks of “secularism” and considered it as a cleansing tool like a dip in the Ganges. “But in this election, not a single party could mislead the country wearing the secular glasses.”

Modi also claimed this was the first election that was not centered around a debate on corruption and inflation.

Shah, addressing party workers, welcomed Modi as the “mahanayak” of the party’s “mahavijay.” (great leader of the grand victory). He ridiculed Opposition parties for their efforts to form an anti-BJP front. He said the Congress could not even “open its account” in a number of states including Delhi, Rajasthan, Himachal Pradesh, Jammu and Kashmir and Arunachal Pradesh. 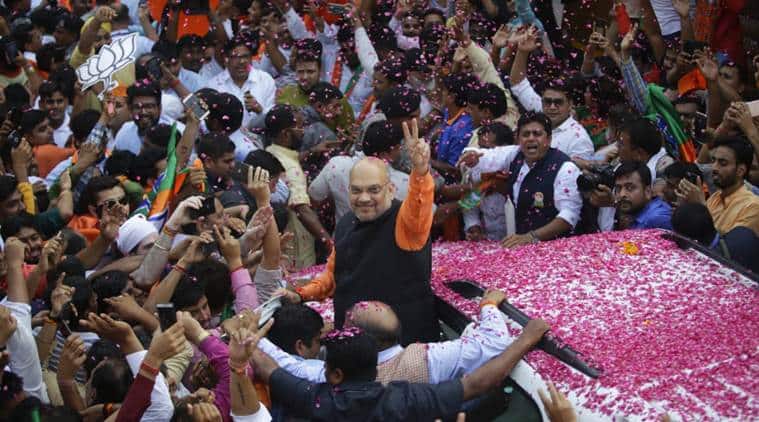 So sweeping is the BJP’s victory in scale and scope, it decisively pushed Congress to the margins of national politics making it struggle to win enough seats to claim the statutory position of the Leader of Opposition in the Lok Sabha.

The jump in the vote share and the absolute addition of votes over 2014 reveals the magnitude of BJP’s win. BJP’s total vote share increased by a significant 6.5 percentage points compared to 2014. Of the 60.37 crore total votes polled in this election, more than 22.6 crore were for BJP. The total number of votes for BJP rose by 32 per cent or 5.5 crore compared to 17.1 crore votes it had got five years ago. 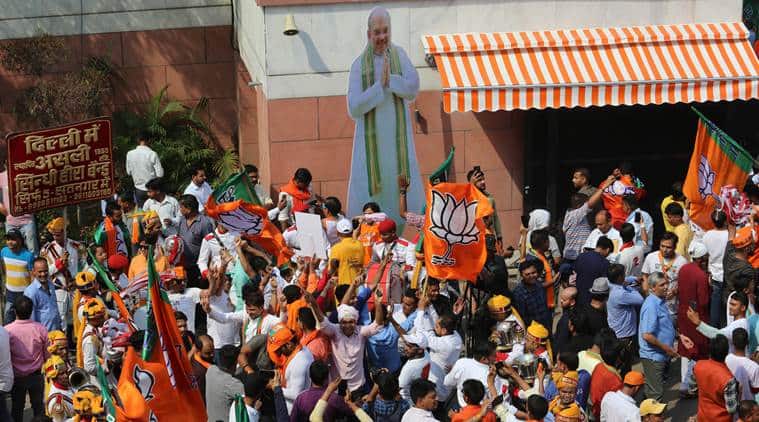 The states that had the largest share in BJP’s swollen vote share include 17 states/UTs where the party got more than 50 per cent of the total votes this time. The only place where the BJP’s votes came down is in Andhra Pradesh where it has fallen by 7.5 percent.

For the Opposition, too, the victory was stunning. Clearly, its narrative of rural distress, effects of demonetisation, depressed commodity prices, joblessness, sluggish private investment and sliding consumption pattern failed to strike chords with voters across caste, class and geography. Instead, the BJP succeeded in making national pride and Modi’s popularity an issue for electoral choices.

The results also marked a full circle for Mandal politics that held sway in vast swathes of country since late ‘80s and shaped the nature of the Central government since mid-90s. It is best reflected in BJP’s success in politically crucial Uttar Pradesh and Karnataka that witnessed a major political realignment against the BJP. Additionally, the BJP’s success in Haryana, Gujarat and Maharashtra seems to have called the bluff of the politics of the dominant communities — Jats, Patidars and Marathas respectively which have been restive and vocal against the BJP government since 2014.

READ | Delhi saffronwash: Why even an AAP-Congress alliance couldn’t have stopped BJP

The verdict also marked the lowest ebb for Left parties which shrunk to their historic low – marking an affirmation of the cultural nationalism that BJP worked its script around. Indeed, the BJP burnished its credentials whether it was through the emphasis of nationalism in election campaign or by fielding Pragya Singh Thakur, an accused in terror case, to buttress its Hindu cultural moorings. 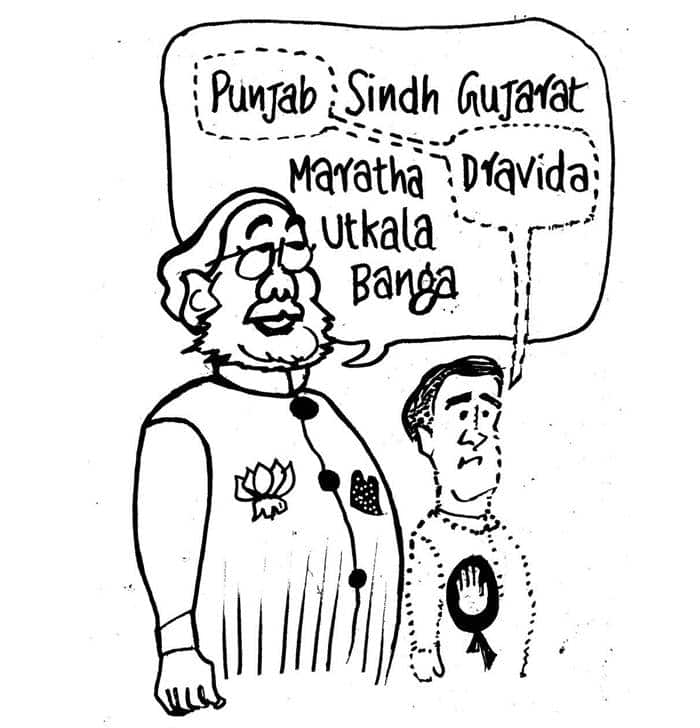 Given the demographics of the country and the record number of first-time voters, the BJP’s electoral success revealed the growing impatience of dynasty-driven parties and their politics. The way several leaders from the first family of many parties — Congress, SP, TDP, TRS, JDS etc — were defeated in different parts of the country, the message is clear: there will be pressure on these parties to recalibrate their membership and leadership ideas to draw the young in.

READ | As BJP makes big gains in Bengal, is it end of the road for Left, Congress?

The spread of the 2019 results suggests BJP’s widening appeal beyond its traditional urban and semi-urban pockets. This is the second time after 2019 that the BJP has won massively in rural pockets of the Hindi heartland and elsewhere. Apart from holding on to its gains in 2014, the BJP broke fresh ground in new areas, in particular West Bengal where it has traditionally been a fringe player. The BJP, additionally, seems to have shown promise in Odisha and Telangana where its previous successes were made possible only in alliance with its regional partners.

Today’s verdict will help BJP make further inroads into other areas, most likely Telangana and Kerala during next five years. The verdict puts traditional parties in these states on notice. In West Bengal, the results suggest that the 2021 Assembly elections could become a direct contest between the incumbent TMC and the BJP. Whether it forces another political realignment is something that will keep the political battlefield in Bengal abuzz.

The BJP’s success, however, also revealed its limitations – it didn’t strike a resonant chord in Andhra Pradesh, Tamil Nadu and Kerala which accounts for 84 Lok Sabha seats. That’s the task cut out for the party, its leaders said today.