Lok Sabha Election 2019 Dates, Schedule News Updates: While polling will commence on April 11, the results will be declared on May 23, Chief Election Commissioner Sunil Arora announced.

Lok Sabha Election 2019 Schedule, Dates LIVE News Updates: Lok Sabha elections will begin on April 11 and will be held in seven phases, Chief Election Commissioner Sunil Arora announced on Sunday. While addressing the media at Vigyan Bhavan in New Delhi, the CEC announced the date for various phases and said counting of votes will take place on May 23. The Model Code of Conduct will also come into effect from today, he added.

The poll panel head also said that assembly polls in Andhra Pradesh, Arunachal, Odisha and Sikkim will be held simultaneously with the Lok Sabha elections. However, elections for the Jammu and Kashmir assembly, which was dissolved after the ruling coalition between the BJP and the PDP fell apart, will not be held during this period, he said.

Elections to the lone Lok Sabha seat in Nagaland will be held on April 11, PTI reported state Chief Electoral Officer (CEO) Abhijit Sinha as saying. By-election to Aonglenden Assembly constituency will also be held along with the Lok Sabha polls on April 11, the first of the seven-phase election in the country. Sinha said, nomination papers could be filed from March 18 to March 25.

Scrutiny of papers will be done March 26 and the last date of withdrawal is March 28.

Counting of votes will be taken up along with the rest of the country on May 25.

This Lok Sabha elections, candidates will have to advertise their criminal records

The Election Commission has made it compulsory for candidates contesting polls to advertise their criminal antecedents in TV and newspapers at least three times during electioneering.

Though directions in this regard were issued on October 10, 2018, the rule will be used for the first time in this Lok Sabha election, scheduled to be held from April 11 to May 19. The results will be announced on May 23. READ MORE

The ruling AAP in Delhi launched its mega campaign for Lok Sabha polls, with full statehood as its central theme, staging a protest near BJP headquarters here over the issue on Sunday.

The Lok Sabha election will decide the fate of the country and also of Delhi, which was badly hurt during the “dictatorship” of the BJP-led dispensation at the Centre, said Delhi AAP convener Gopal Rai.

AAP volunteers and its frontal organisations protested near BJP headquarters on the Deen Dayal Upadhyaya Marg, demanding the party to clear its stand on full statehood to Delhi. READ MORE

A bypoll to Chhindwara assembly constituency will be held on April 29.

The opposition parties in Bengal, however, welcomed the seven-phase polls saying it reflects the "deteriorating" law and order situation under TMC rule. CPI(M) politburo member Mohammed Salim said, "The seven-phase election reflects the law and order situation in the state... how people were stopped from exercising their democratic rights." He was referring to the violence that took place during the panchayat polls in the state last year.

Maharashtra to vote in four phases

Lok Sabha polls will be held in four phases in Maharashtra starting from the Vidarbha region on April 11, a top official said. At 48, Maharashtra sends the second largest number of MPs to Lok Sabha, after Uttar Pradesh which has total 80 constituencies. The total number of voters in Maharashtra, as on January 25, stood at 8,73,30,484 as against 8,07,98,823 in 2014.

Modi govt will be remembered for wasting historic mandate: Congress

Soon after the dates were announced, the Congress hit out at the Modi government saying it will be best remembered for "wasting" its historic mandate and that all its promises remained "unfulfilled". Party leader Ahmed Patel, in a series of tweets, said the 2019 elections will herald a new era ending five years of "chaotic, despotic and destructive" dispensation and the country will return to the path of "sobriety, integrity and inclusivity". "NDA 2 will be best remembered for wasting its historic mandate in the pursuit of petty benefits for a handful of individuals, by imposing a heavy cost on the entire nation For 5 years India waited, but Acche Din never came (sic)," he tweeted.

Over 4.47 crore electors are eligible to cast their votes for 26 Lok Sabha seats in Gujarat, elections to which will be held on April 23, state Chief Electoral Officer S Murali Krishna announced today. Notification for the election will be issued on March 28 and candidates can fill nomination forms between March 28 and April 4, he added. Scrutiny of nomination forms will be held on April 5, and candidates can withdraw their nomination forms by April 8, he said, adding that the model of conduct had now come into force. "There are around 4.47 crore voters in the state. Votes will be cast across 51,709 booths. Of these 4,47,464,179 voters, 2,32,56,688 are men and 2,14,88,437 women," the CEO said.

VVPAT at all booths, candidates’ photo on EVMs: Key announcements by EC

The Election Commission today said ‘voter-verifiable paper audit trail’ (VVPAT) will be used in all polling stations this time along with electronic voting machines. In order to facilitate the electors in identifying the candidates, photographs of politicians will be used on EVM ballot paper. “This will help avoid any confusion, which may arise when candidates with same or similar names contest from the same constituency. For this purpose, the candidates are required to submit to the Returning Officer, their recent stamp size photograph as per the specifications laid down by the Commission,” CEC Arora said. Click here to know more.

Over seven lakh electors would be eligible to vote on April 11 in Mizoram, the state's CEO Ashish Kundra said. Of the 7,84,405 eligible voters, 51 per cent are women, Kundra said. Noting that the state election department was fully prepared to conduct the elections, the CEO said that expenditure for the coming polls would be at least 15 per cent less compared to the state assembly polls held on November 28 last. Deployment of central armed police force would also be "immensely reduced" during the elections, he said.

Lok Sabha elections in Delhi on May 12, Kejriwal says 'time to throw out dictatorial govt'

Elections to the seven Lok Sabha seats in Delhi will be held on May 12. According to the final electoral roll published on January 18 by the Chief Electoral Officer, there are over 1.36 crore voters in Delhi. After the EC's announcement today, Delhi Chief Minister Arvind Kejriwal tweeted, "Ultimately back to 'We the people' -- the real power of our democracy. Time to throw out the most dictatorial and anti-federal govt in the history of India. Time to seek answers on demonetisation, jobs, destruction of traders and destroying brotherhood amongst different communities."

Ultimately back to We the people -the real power of our democracy. Time to throw out the most dictatorial and anti-federal govt in the history of India. Time to seek answers on demonetisation, jobs, destruction of traders n destroying brotherhood amongst different communities

The announcement of dates for the Lok Sabha Elections Sunday witnessed an array of political leaders tweeting their reactions. Welcoming the announcements of polling dates, BJP president Amit Shah claimed that Modi government has ‘dared to take bold and futuristic decisions for the welfare of 130 crore Indians’. Bahujan Samaj Party supremo Mayawati took to Twitter to criticise the ‘anti-poor and pro-capitalist Modi government’ and maintained that the new government, after the elections must function in a constitutional manner. Read full story here. 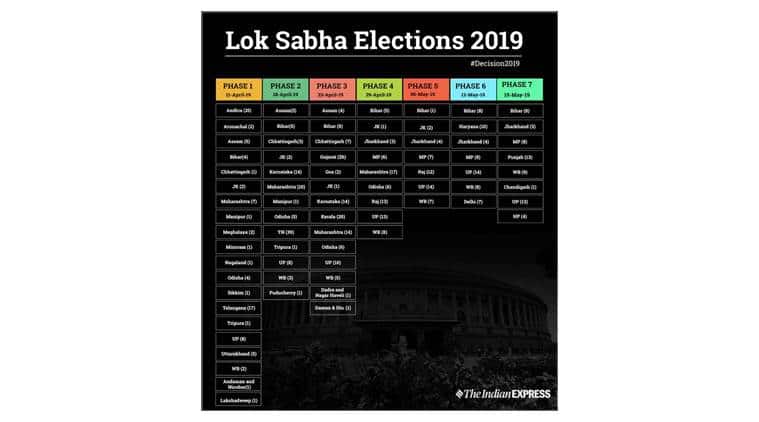 During his address to the media, CEC Arora had said that a large contingent of security forces are required to ensure the protection of every J&K candidate. "This was a categorical demand from all political parties there. The availability of security forces is a constraint," he said.

Q: If EC can hold LS poll in J&K, then why not state elections?

A: We need large no. of security personnel to be deployed for protection of every candidate. This was a categorical demand from all pol parties there. Availability of security forces is a constraint@IndianExpress

Decision to not hold polls in J&K is surrender to Pakistan, militants & Hurriyat: Omar Abdullah

Describing the poll panel’s decision to not hold assembly elections in the state as “surrender to Pakistan, to militants and to the Hurriyat”, Omar Abdullah said, "In light of the failure to conduct assembly elections on time in J&K I’m retweeting my tweets from a few days ago." He added, “PM Modi has surrendered to Pakistan, to the militants & to the Hurriyat. Well done Modi Sahib. 56-inch chest failed. #slowclap." Read full story here.

When asked if the Ministry of Home Affairs had not agreed to the EC's demands for security forces for J&K polls, Arora said, "The availability of central forces is definitely not an issue. You cannot disregard recent events. The EC cannot be non-cognisant of the situation on the ground and the feedback of the state administration."

No simultaneous polls in J&K: What happened to Rajnath's assurance, asks Omar Abdullah

Upset with the EC's decision to not hold bypolls in J&K simultaneously, former J&K chief minister Omar Abdullah said, "What happened to Rajnath Singh’s assurance to Lok Sabha and Rajya Sabha as well as to the all-party meeting recently in Delhi that all forces would be made available for simultaneous polls?"

What happened to @rajnathsingh’s assurance to Lok Sabha & Rajya Sabha as well as to the all party meeting recently in Delhi that all forces would be made available for simultaneous polls?

In the run-up to the high-stakes polls, several Opposition parties have banded together in the hope of wresting power from the BJP, which registered a thumping victory in the 2014 polls.

The term of the 16th Lok Sabha will come to an end on June 3, 2019. According to an analysis by PRS Legislative Research, 133 bills were passed during the 16th Lok Sabha, which held sessions from June 2014 and February 2019. The House worked a total of 1,615 hours — 40 per cent less time than the average number of hours (2,689) spent by previous Lower Houses that completed full-term.

For the 2014 general elections, the EC announced the dates on March 5.