Lok Sabha Bypoll Results 2018 Live: The bye-election on four parliamentary seats were held on May 28. (Express Photo by Vishal Srivastav)

Electoral success continued to evade BJP in the face of an united opposition in Uttar Pradesh bypolls as the saffron party was trounced by RLD in Kairana Lok Sabha seat, while Samajwadi Party gave it the blues in Noorpur assembly constituency. RLD candidate Tabassum Hasan, who was backed by SP and Congress and tacitly supported by BSP, defeated BJP’s Mriganka Singh by over 50,000 votes.

Singh, the daughter of late BJP leader Hukum Singh, whose death in February necessitated the bye-election, conceded defeat and said the alliance had emerged strong. “Many voters did vote for BJP but with a lead of some thousand votes, the alliance has won. I would like to congratulate the candidate. The alliance has emerged strong and now we have to prepare better for future,” Singh said.

Meanwhile, in Mahatashtra, BJP retained the Palghar Lok Sabha seat while NCP won in Bhandara-Gondiya constituency. BJP’s Rajendra Gavit defeated his nearest rival, Shriniwas Wanga of Shiv Sena, the son of sitting MP Chintaman Vanga, whose death in January had necessitated the bypoll, by over 29,000 votes. However, Shiv Sena claimed there was discrepancy in the counting of votes in a few rounds in Palghar and demanded recounting. Sena has shot off a letter to the election officials. In Bhandara-Gondiya seat, which the BJP had won in the 2014 elections, the NCP’s Madhukar Kukade has established a lead of 16,112 votes over the BJP’s Hemant Patle.

Coming to the eastern region, Tokheho Yepthomi, fielded by the ruling People’s Democratic Alliance (PDA), is leading over his lone rival of the opposition NPF for the lone Lok Sabha seat in Nagaland.

Lok Sabha Bypoll Results 2018 for Kairana, Bhandara-Gondiya, Nagaland and Palghar will be declared today. Click hear to read in Malayalam  and Bengali

Tabassum is first Muslim MP from UP in 16th Lok Sabha

Tabassum Hasan, whose victory in Kairana has given strength to opposition unity in Uttar Pradesh ahead of the 2019 general election, today became the first Muslim MP from the most populous state in the 16th Lok Sabha. Hasan (48) defeated her nearest BJP rival Mriganka Singh by a huge margin of over 46,000 votes.

'Though Sena lost Palghar bypoll, I refused to accept defeat,' said Uddhav Thackeray, Shiv Sena president, while addressing the media avoiding to answers queries on whether the Sena would quit the government. He further raised questions on EVM machines and the election process and also demanded suspension of the returning officer of Palghar bypoll. "Balasaheb was banned from voting and contesting polls for corrupt practices. Now, the all the political parties should file a case against Election Commissioner for the corrupt system," he said.

To take a giant leap, you will have to take two steps back, says Rajnath Singh

With the BJP facing a drubbing in the bypolls, Delhi Chief Minister Arvind Kejriwal on Thursday said it reflected the anger against the Modi government. The AAP convenor said until now the people were asking who was the alternative to Prime Minister Narendra Modi, but results showed that they wanted to remove him. "Today's results reflect that there is a lot of anger against the Modi government. Until now people were asking what is the option. Today, people are saying Modi ji in not an alternative. Remove him first," he tweeted.

Shiv Sena alleges discrepancy in counting of votes in Palghar

Shiv Sena claims there was discrepancy in votes in few rounds in Palghar and has demanded recounting. Sena has given a letter to the election officials. BJP retained the Palghar Lok Sabha seat where its candidate Rajendra Gavit won the bypolls by over 29,000 votes. 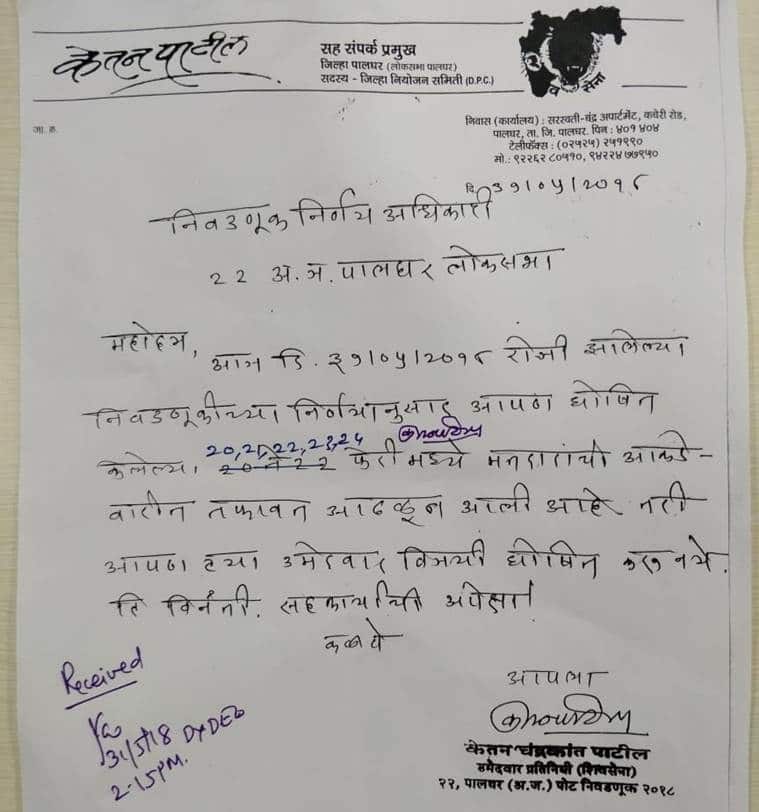 Taking a dig at the BJP for losing Kairana and Noorpur seats in their own backyard, SP chief Akhilesh Yadav said it was also a defeat of the saffron party's divisive politics. "Congratulations to the people, activists, candidates and all united parties of Kairana and Noorpur! BJP's defeat in Kairana where their government is at the helm is the defeat of their politics that divides the country. This is the beginning of the victory of the people who believe in unity and the end of egoistic power," tweets SP chief Akhilesh Yadav.

BJP's Kairana candidate Mriganka Singh has her conceded defeat to RLD's Tabassum Hasan. "Many voters did vote for BJP but with a lead of some thousand votes, the alliance has won. I would like to congratulate the candidate. The alliance has emerged strong and now we have to prepare better for future," Singh, the daughter of late BJP MLA Hukum Singh, said.

It seems opposition unity has again prevailed over BJP in Uttar Pradesh. In the crucial Kairana Lok Sabha seat, RLD candidate Tabassum Hasan has defeated BJP's Mriganka Singh. The bye-election to Kairana -- a seat BJP won in 2014 -- was seen as a litmus test for a broader opposition unity ahead of the 2019 elections. Hasan, who had the backing of the Congress and Samajwadi Party, said the people of Kairana had voted out negative and divisive politics.

Tokheho Yepthomi of the ruling NDPP has consolidated its lead over his NPF nominee by increasing its margin to over 41,000 votes for the lone Lok Sabha seat, EC sources said. Yepthomi of the Nationalist Democratic Progressive Party (NDPP) has so far bagged 2,15,835 votes, while C Apok Jamir of the opposition Naga People's Front (NPF) secured 1,73,863 RPT 1,73,863 votes in a straight fight.The PDA's major partners are the NDPP and the BJP. The Congress has extended its support to the NPF candidate. The bypoll was necessitated after Chief Minister Neiphiu Rio, who is also the NDPP leader, had resigned from the Lok Sabha in February. 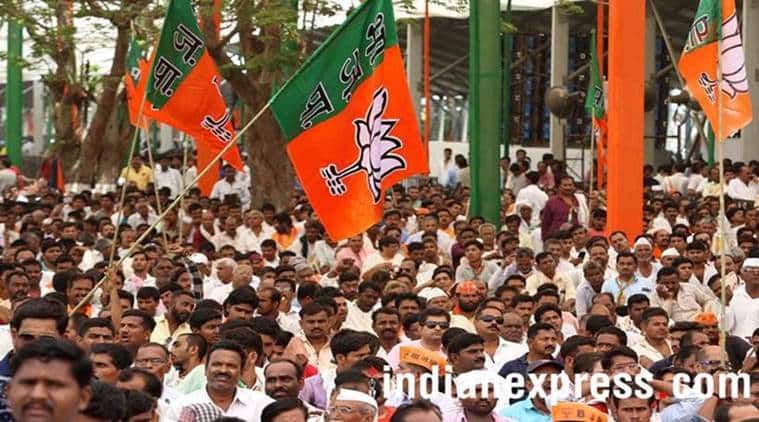 The Bhandara-Gondiya Lok Sabha seat has become a prestige issue for the BJP as former Bharatiya Janata Party (BJP) Member of Parliament (MP) Nana Patole resigned blaming Prime Minister Narendra Modi for “doing nothing for the farmers’ community in the last four years”. Simultaneously, the Nationalist Congress Party (NCP), led by former Union minister Praful Patel, is trying to wrest control of its old bastion by collaborating with the Congress. The Trends so far show  NCP's lead with 51,279 votes.

Bypolls across the country could throw up significant political indicators ahead of the Lok Sabha elections: Here's a breakup

Gujjar leader Hukum Singh’s daughter Mriganka is BJP candidate against Tabassum Hasan of RLD, who is backed by SP. Two political currents will be in play: Jat-Gujjar rivalry and Jat-Muslim tensions. After setbacks in Gorakhpur and Phulpur, a fresh test for Modi and Yogi.

Lone LS seat fell vacant after Neiphiu Rio became CM; his People’s Democratic Alliance, which includes BJP, has fielded Tokheho Yepthomi; Naga People’s Front candidate is C Apok Jamir, who is supported by Congress. Northeast voters tend to go with whoever is in power at the Centre.

Fight in Adivasi-dominated constituency is between BJP and Shiv Sena. Sena has fielded Shriniwas Wanga, son of late BJP MP Chintaman Wanga; BJP has fielded Rajendra Gavit, who defected from Congress. Recent events in Karnataka have boosted anti-BJP forces in neighbouring Maharashtra, who will gain momentum if the result is against the BJP.

After round 20 in Palghar, BJP still ahead with a greater margin

NCP leads in Bhandara-Gondiya, Sena trails in Palghar at the end of 17th round of counting

In Bhandara-Gondiya, NCP candidate Madhukar Kukde is leading with 51,279 votes while the BJP's Hemant Patle was at second place with 48,382 votes after the third round of counting. In Palghar, BJP's Rajendra Gavit maintained his lead by securing 1,90492 votes while Shiv Sena's Shrinivas Wanaga got 1,68,477 votes.

Besides, Bahujan Vikas Aghadi's nominee Baliram Jadhav got 62,187 votes, Kiran Ghala of the CPI-(M) got 35,271 while Congress' Damodar Shingda got 19,920 votes in Palghar.

The path for united opposition is clear in 2019: RLD's Tabassum Hasan

This is the victory of truth. I still stand by what I said, there has been a conspiracy and we do not want any future elections to be conducted on EVM machines. The path for united opposition is clear in 2019: RLD's Tabassum Hasan on her lead in trends of Kairana Lok Sabha by-poll pic.twitter.com/S8FWQBJJbL

All eyes will be on the results of Kairana bypolls held on May 28. (File)

The voting was held in Kairana, Bhandara-Gondiya, Nagaland and Palghar Lok Sabha seats on May 28. After receiving reports of failure of voting machines, the Election Commission had ordered repolling on Wednesday. In total, re-polling was held across 123 poll booths in all four constituencies.