Karnataka assembly elections 2018 LIVE UPDATES: BJP president Amit Shah launched a scathing attack on Chief Minister Siddaramaiah, saying that development in Karnataka had come to a halt just like the traffic in Bengaluru.

A BJP roadshow in Karnataka on Thursday. (Express photo/Aaron Pereira)

The high-pitched election campaign for the Karnataka Assembly polls concluded at 5 pm as political parties held multiple rallies in their last attempt to woo voters on Monday. BJP president Amit Shah launched a scathing attack on Chief Minister Siddaramaiah, saying that development in Karnataka had come to a halt just like the traffic in Bengaluru and that the Congress candidate will lose both the seats in the upcoming Assembly polls.Congress chief Rahul Gandhi, on the other hand, held a press conference along with Siddaramaiah, and attacked the Modi government over a range of issues, including dalit atrocities and rise in crimes against women. Rahul also took a swipe at the PM for “not holding a press conference in the last four years”.

While addressing the SC/ST/OBC and Slum Morcha workers of Karnataka through the ‘Narendra Modi App’, Prime Minister Narendra Modi said, “Congress never respected Baba Saheb Ambedkar. Until the Congress party was in power, Baba Saheb was not given Bharat Ratna. Congress has no place for Dalits and backwards.” Follow LIVE in Karnataka

With just two days left for the elections, Bengaluru City Police Commissioner T. Suneel Kumar on Thursday imposed prohibitory orders under section 144 in the city. “In view of Karnataka Legislative Assembly 2018, The Commissioner of Police, @BlrCityPolice has passed Prohibitory Orders in Bengaluru City commissionerate jurisdiction, as precautionary measure. @CPBlr,” tweeted the commissioner’s office with a copy of the order.

Time to campaign for the Karnataka Assembly elections ended at 5pm. While voting for the 224 seats in the state will be held on May 12, counting will held on May 15.

So, where all did PM Modi, Rahul Gandhi and CM Siddaramaiah campaign? Well, this interactive maps has all the answers. 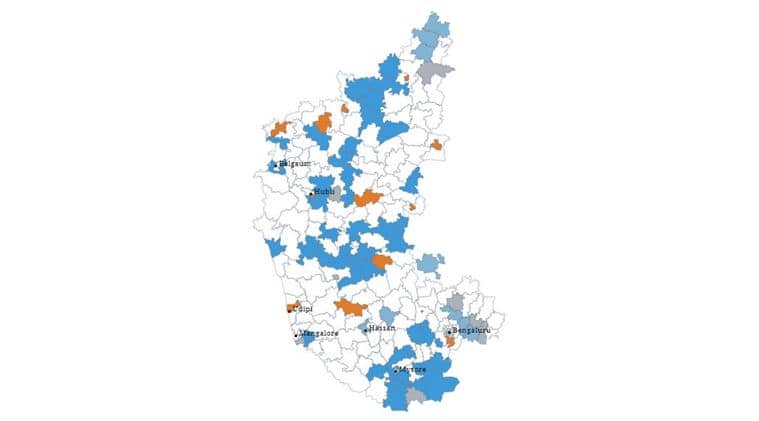 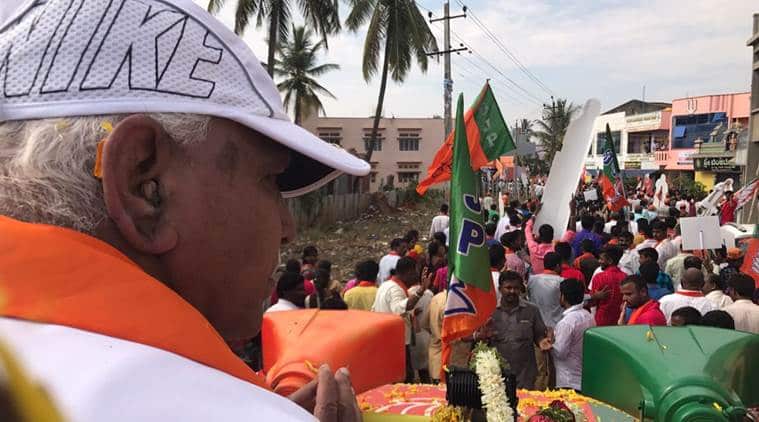 BJP’s chief ministerial candidate BSY Yeddyurappa at a roadshow in his constituency of Shikaripura, Karnataka. Campaigning for the May 12 election ends on Thursday evening at 6 pm. (Express Photo/Aaron Pereira)

Meanwhile, Karnataka Pradesh Congress Committee working president Dinesh Gundu Rao also addressed the media. He said, "Despite supporting corrupt and jailed leaders in their own party, the PM comes to Karnataka and levels baseless allegations against us. Just one day before CJI Balakrishnan retired, he passed an order in a case related to Reddy Brothers Mining Company. Now, several videos have surfaced which show how bribe deals were carried out between the CJI's son-in-law and Sriramulu/Reddy Brothers. The videos that surfaced today show how Sriramulu and middlemen Captain Reddy, Balan, Swamiji Rajnish & CJI Balakrishnan’s son in law Sreenijan discuss bribe deals in order to get a favourable judgement from the Supreme Court in the Obalipuram case."

"We can lose elections but can't sit with Social Democratic Party of India and Popular Front of India. Congress takes support of SDPI and PFI to win elections and that's the difference between them and us. Congress doesn't refrain from taking support of traitors," Amit Shah said.

'I am certain that Yeddyurappa will form the government in Karnataka this time. PM Modi has directed us to take the message of BJP to every household in Karnataka. BJP will win more than 130 seats and form government here. There is no question of seeking or giving support to anyone,' the BJP chief told reporters.

"Congress is trying to win the elections using undemocratic ways. The recovery of voter ID cards in Rajarajeshwari Nagar shows their desperation to win the election. I want to alert those whose fake IDs have been made - don't fall in the Congress trap and disrupt the polls. It is they who are flouting rules and putting the blame on BJP," Shah said.

Murderers can get away under Siddaramaiah govt: Amit Shah

"Law and order have seen a downfall in Karnataka. More than 24 workers of BJP and RSS were brutally killed in the state and Congress considers it a part of politics. No efforts were made to nab the culprits. Murderers can get away under the present government," Shah said.
Last week, the party chief condemned the killing of BJP and RSS workers under the five-year Congress rule. “Condemn the killing of BJP and RSS workers under Congress rule. More than 24 workers have died and the police hasn’t taken any action against the killers, they are roaming around free. Siddaramaiah government’s end is nearing and once BJP is in power we will ensure justice,” he had said.

While addressing the media in Bengaluru, Shah said, "Congress has campaigned against PM Modi's policies. Like traffic, development in Bengaluru has come to a halt. Siddaramaiah must answer why his government has taken away people's rights. I will ask people not to get carried away by Congress' vision.  Siddaramaiah will lose both the seats. Congress is trying to win the elections with the help of anti-nationals."

Time for BJP with absolute majority in Karnataka: Shah

The writing on the wall is clear...It's time for BJP with absolute majority in Karnataka.
A picture from the road show in Badami, Bagalkote (Karnataka). pic.twitter.com/2PAIvLNjQH

Ahead of the polls, Kannada actress Bhavana Ramanna on Thursday joined BJP. She was earlier with Congress.

As the campaign on last day in Karnataka draws to a close, I can't thank the people enough for their unforgettable love & support. I assure you our govt will work to improve lives of people & build a better future for all. Sharing some pictures from road show in Badami,Karnataka. pic.twitter.com/t3RUMdfCyE

Roadshow to begin in a bit. @BSYBJP's vehicle has arrived. pic.twitter.com/ctKbZxW1x5

Roadshow to begin in a bit. @BSYBJP's vehicle has arrived. pic.twitter.com/ctKbZxW1x5

Congress President @RahulGandhi paid a condolence visit to the family of Late HV Madoli, the DCC President from Dharwad Rural who passed away while campaigning tirelessly for the Congress candidate. pic.twitter.com/1lrDgsbtH6

Enjoyed meeting the regional & national press today in Bengaluru. We had a packed house! I’m sorry not everyone got a chance to ask a question due to the paucity of time.

But, unlike our PM who hasn’t had a press conference in 4 yrs., I will be doing many more of these! pic.twitter.com/tzNVHVLXdu

His wife was caught red handed accepting a bribe

No wonder he's one of the closest to #10PercentCM#SinsOfCongress#SarkaraBadalisiBJPGellisi pic.twitter.com/PZjuF04U66

Prime Minister Narendra Modi speaks during a public rally ahead of Karnataka Assembly elections 2018 at Belagavi on Wednesday. (PTI Photo)

Prime Minister Narendra Modi on Wednesday described as “an insult to democracy” Congress president Rahul Gandhi’s claim of being in the reckoning to be PM in 2019 if the Congress emerges as the single largest party. On the final day of his 10-day, 21-rally campaign across most of the 30 districts of Karnataka, the Prime Minister called Rahul Gandhi’s claim an example of the dynastic policies of the Congress. “Those who do not know anything other than dynastic politics have no value for democracy and that is why some people think that the PM’s seat is reserved only for one family and that no one else can take it and that no one else has a right. This is why the elite man has declared he will be PM in 2019. Is he royalty? Who will sit where will be decided by the people. This is an example of the insult of democracy by the Congress,’’ the Prime Minister said at his final rally in Bidar Wednesday.