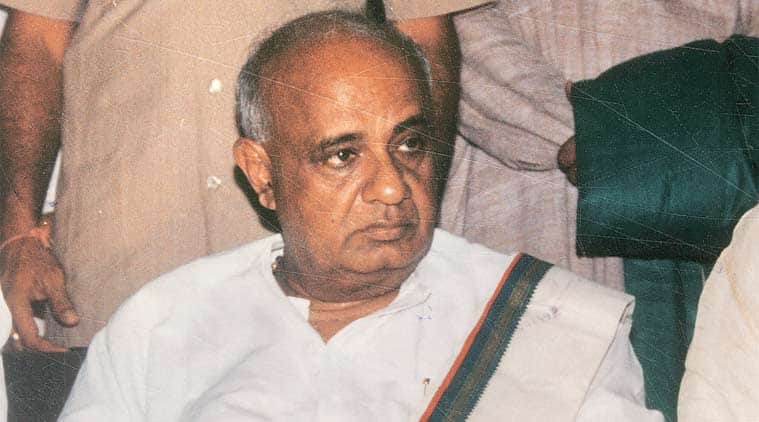 In 10 days, former PM and JD(S) president H D Deve Gowda will turn 85. Over the last few weeks, he has been on the road campaigning. It does tend to take a toll at his age, he said a few days ago at a rally. With the future of the JD(S) on his shoulders and those of his son and former chief minister H D Kumaraswamy, Deve Gowda, patriarch of the Vokkaliga community who inhabit the Old Mysuru region, has few options other than to lead from the front. At a time when the state is discussing the possibility of the JD(S) being a key player in the formation of the new government, The Indian Express met Deve Gowda at his Bengaluru home Wednesday morning. Excerpts:

Most surveys have predicted a hung Assembly, making the JD(S) key to the formation of the new government…

What can you do about that? See, the problem is that the two national parties are pouring money into the elections like anything. Some of the channels have been showing that money is no problem for these two national parties and that Gowda is suffering due to a resources crunch. What can I do in this situation? Who is going to come and give me funds to fight the elections? That is the issue now. We are struggling, but despite all these problems, we are also giving a good fight. The people have appreciated the stand taken by Kumaraswamy on various matters and the manifesto he has released, which covers almost all sections of society including farmers. And so, even the ordinary workers feel that their problems will be taken care of comprehensively. We have promised to waive the loans of farmers, so that is one major issue where people have some confidence in us. We are, however, unable to compete with the money power of the national parties. The media is not on our side and they are not cooperating with us. The electronic media is totally against us, so what can we do? Everybody is saying we will get only 32 seats.

People often refer to the JD(S) as an option over the national parties. But is the JD(S) equipped organisationally to capitalise on this mood for change?

This Congress government is one of the worst governments we have seen. What type of government is this? They are concerned only with money, money, money. Karnataka has been looted in the last five years. I take responsibility when I make this charge.

What is evident is that the JD(S) has high support in Old Mysuru, where there some 55 seats, but it does not have this kind of support in other parts…

It seems possible that there could be a situation like 2004, when the JD(S) emerged kingmaker in a hung Assembly. In such a situation, which national party would you prefer to go with?

This is not an issue at present. Why should I care about that? If a situation arises, then the party will take a decision and it will not be the decision of any individual.

Congress president Rahul Gandhi has said Opposition unity is key to defeating the BJP in 2019. What is your view?

What is your view on the performance of the Narendra Modi government?

Why should I bother about it? I can only say his charisma has gone down among the public.