The first sitting president of the JNU Students’ Union to contest an election, Ghosh says, “There are a lot of differences between JNU and Jamuria (Assembly seat). Marigold garlands around her neck, she walks in a modest procession of 40-odd people. The dust-layered lanes of Jamuria town in West Bengal’s Paschim Bardhaman district may seem a world away from the verdant campus of JNU in New Delhi. However, Aishe Ghosh, 26, says her fight remains the same.

The first sitting president of the JNU Students’ Union to contest an election, Ghosh says, “There are a lot of differences between JNU and Jamuria (Assembly seat). Kintu lorai dooto jaygatei somman (But the fight is the same in both). Earlier, I fought for students’ rights. Here it is for rights of all, students, youths, workers, women, minorities.” Seeking to attract the youth vote, the CPM in West Bengal has fielded several young faces, including one other JNU leader (Dipsita Dhar). But Ghosh carries another resonance — she become a national figure after she was injured during the violence on JNU campus in January last year.

The Left is part of an alliance including the Congress and Indian Secular Front.

Jamuria is known for its coal mines, the mafia that controls operations, and as a CPM stronghold. The last two times, the party’s Jahanara Khan won.

On a Wednesday morning, 79-year-old Gupta Thakur introduces Ghosh in Bakshimulia area, saying, “I have been organising campaigns for the CPM since 1977. We are lucky that a student at one of the finest universities will represent us.”

Going door to door, Ghosh says, “The public response has been very positive… It is us who are speaking of employment, education and food for the people.”

In Baijanti area, she walks up to Muhammad Riyaz, who is watching her procession, and asks him about his problems. “Asirbad korben, ami apnar meyer moton (Bless me, I am like your daughter),” she adds, as Riyaz puts some flowers on her head. 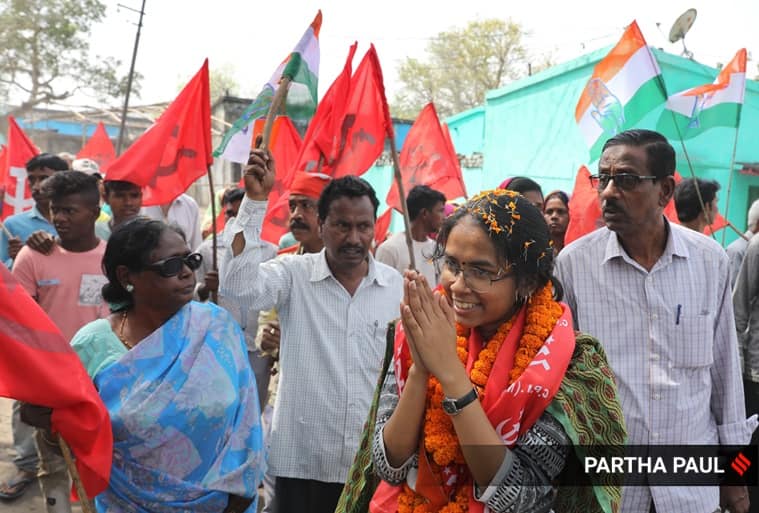 After she leaves, Riyaz says he told Ghosh about the drinking water problem. “I told her not to worry about my vote,” he says.

However, others are not so sure. Apart from the long-standing water issue and lack of basic necessities like roads and toilets, there is anger against sitting MLA Khan for not visiting the constituency since the 2016 win.

Says Ruhi Khatun, “Whoever gives us water and electricity, has our vote.”

Ghosh claims to have identified some solutions already. “We can ask the Damodar Valley Corporation, which provides water in certain areas in the district.”

Addressing a gathering at a chowk in Pariharpur, Ghosh says, “I will take up your problems in Kolkata and, if need be, in Delhi.”

Tinpukuria breaks into commotion soon after Ghosh has left, winding up for the day. Says Sam Tudu, “Next time, we will not allow any party into our village… The ruling party has not supplied water to us, our MLA has failed. Now, the ponds are drying up. And so is our patience.”