Jammu and Kashmir (J&K) Local Body Election Results 2019 Highlights: The electoral exercise, the first in the state after abrogation of its special status, was boycotted by the Congress, the National Conference and the PDP.

Jammu and Kashmir Local Body Election Results 2019 Highlights: 217 independent candidates were elected to the post of chairperson in the maiden Block Development Council (BDC) elections in Jammu and Kashmir, with the BJP winning in 81 of the 310 blocks, news agency PTI reported. Nearly 100 per cent polling was recorded in the first-ever BDC polls in the state. The polling began Thursday morning amid tight security.

The Block Development Council forms the second tier of the Panchayat Raj system in J&K. All the 23,629 panches and 3,652 sarpanches of the Panchayats voted to elect the chairperson of the Block Development Council. There are a total of 316 blocks of which elections were scheduled to be held on 283 blocks. According to CEO Shailendra Kumar,” the polling started at all the polling stations this morning. There has been no reports of delay from anywhere.”

But with the mainstream political leadership detained since August, and, barring the BJP, all the major parties — NC, PDP and Congress — deciding to boycott the polls, questions are being raised about the credibility of the process.

Kashmir local body elections LIVE updates:  Follow latest developments in J&K as the state votes for the first time since the abrogation of special status under Article 370

Over 200 Independents were elected to the post of chairperson in the first-ever Block Development Council (BDC) elections in Jammu and Kashmir, with the BJP winning in 81 of the 310 blocks. The Congress, the National Conference and the PDP stayed away from the elections, the first after abrogation of the state's special status, because of continued detention of their leaders. Elections were held in 283 blocks on Thursday as twenty-seven candidates were elected unopposed, poll officials said, adding that results of three blocks are awaited.

The Jammu and Kashmir National Panthers Party (JKNPP) won in eight blocks and the Congress in one, Chief Electoral Officer Shailendra Kumar said. The Congress candidate had filed nomination papers before the party announced it would boycott the elections, sources said. "In total, 217 Independents won. The BJP won in 81 blocks," he said, adding that a 98.3 per cent was recorded in the polls. PTI

Nearly 100 per cent polling was recorded in the maiden Block Development Council (BDC) election in Jammu and Kashmir on Thursday, with the Congress, NC and PDP boycotting the first electoral exercise after abrogation of the state's special status. "98.3 per cent polling was recorded in J-K", Chief Electoral Officer (CEO) Shalinder Kumar said. The polls to elect chairpersons of BDCs were held in 310 blocks in the state and 1,092 candidates were in the fray, of whom 27 were elected unopposed. Srinagar district recorded 100 per cent polling followed by Reasi (99.7 per cent) and Jammu (99.5 per cent) polling. There were 26,629 electors -- 8,313 women and 18,316 men -- for the polls to elect chairpersons of BDCs, officials said. PTI

99.5 per cent polling registered in first-ever BDC elections in J&K

Nearly 100 per cent polling was recorded in Jammu district in the maiden Block Development Council (BDC) elections in Jammu and Kashmir. The electoral exercise, the first in the state after abrogation of its special status, was boycotted by the Congress, the National Conference and the PDP.

"Jammu district has registered a polling percentage of 99.5. Out of the 2,703 voters, 2,690 voted in 20 blocks," District Electoral Officer Sushma Chauhan said. The polling percentage till 11 am was 50 per cent and when it ended at 1 pm it was 99.5 per cent, she said. Polling in Jammu began at 9 am. Chauhan said 1,797 men and 893 women exercised their franchise. The polls to elect chairpersons of BDCs was held in 310 blocks in the state and 1,092 candidates were in the fray, of which 27 were elected unopposed. PTI

1,065 candidates in fray after final withdrawal of nomination papers

After the final withdrawal of nomination papers, 1,065 candidates are in fray for the BDC polls across the 22 districts of the state, election officials were quoted as saying by news agency PTI. Twenty-seven candidates have been elected chairpersons in various block development councils (BDC) of the state unopposed. There are 316 blocks in the state, out of these two are without elected panches or sarpanches besides, four blocks have been reserved for women. Thus, the elections would be held in 310 blocks, officials said. PTI

Meanwhile, counting of votes for Maharashtra and Haryana is underway. The BJP-led NDA has taken a comfortable lead in Maharashtra, where it leads in 166 seats in the 288-member Assembly. In Haryana, a more interesting scenario is playing out where both BJP and Congress bagged 35 seats each in the 90-member House.   Follow Maharashtra, Haryana Election Results 2019 LIVE UPDATES

Even after elections, 61% of panch seats vacant in valley

The security has been tightened in all polling centres across Kashmir with steel barricades being put up on the roads by government forces.

What next after BDC elections?

It’s the first time that elections to the blocks, the second tier of grassroots democracy after panchayats, are being held in Jammu, Kashmir and Ladakh. Questions have, however, been raised over the credibility of the process in the Valley given that the entire mainstream leadership, barring the BJP, is in jail and the National Conference, PDP and the Congress have decided to stay away from the polls that are being held on party lines. Officials claim the BDC elections will pave the way for elections to the District Planning and Development Boards (DPDB), the third tier of panchayati raj, and thus spur development in the state. “It is for the first time that DDB would be emerging out of popularly elected local self-governments,” Chief Electoral Officer (CEO) Shailendra Kumar told The Sunday Express.

How many days do you want restrictions in J&K: Supreme Court asks Centre

In other news,  the Supreme Court on Thursday posted petitions challenging alleged communication and blackout in Jammu and Kashmir for November 5.  A three-judge bench headed by Justice NV Ramana asked the government on how long it intends to continue with the restriction in the state after the abrogation of Article 370.

See pictures from polling station in Jammu and Kashmir

Ballot boxes will be used during the polls as the election shall be held through a secret ballot. 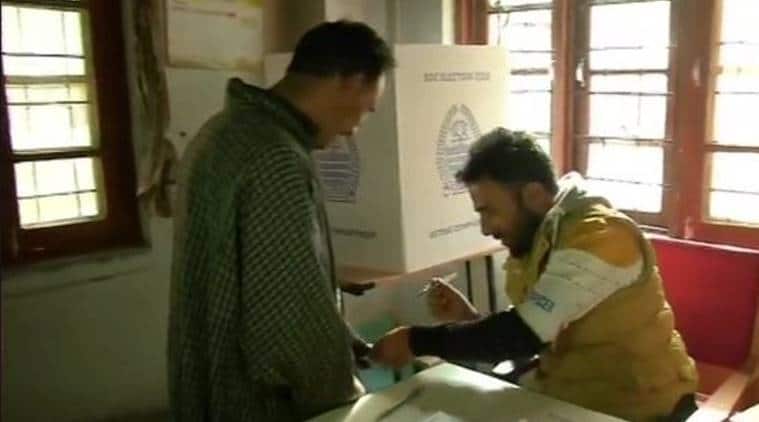 Jammu district electoral officer Sushma Chauhan said there were no reports untoward incident reported from anywhere in Jammu. Tight security has been put in place at all the polling stations and candidates to ensure peaceful polling. Due care has been taken about the security of panchs and sarpanches who are going to vote for the BDC polls, the officials said.

Results to Kashmir local body elections to be declared today, no reports of delay in voting

Polling in Jammu and Kashmir will be held from 9 am-1 pm and the results would be announced later in the day. State Chief Electoral Officer Shailender Kumar said, "the polling has started at all the polling stations from 0900 hours this morning. There have been no reports of a delay from anywhere."

Who are the voters for today's block polling in J&K?

The strength of the electorate is 26,628 panches and sarpanches. These are from among the 23,376 panches and 3,847 sarpanches who were elected in undivided Jammu and Kashmir in November-December last year. Those panchayat elections, held over nine phases, had a very poor response. Within Kashmir, a huge number of seats remain vacant —11,264 of 18,833 panch seats (61 per cent) and 1,311 of 2,375 sarpanch seats (34 per cent). Of the 7,596 panches in Kashmir, more than half were elected unopposed. The State Election Commission said only 1% of the seats in Ladakh division and 2% in Jammu are vacant. Chief Electoral Officer Kumar said the vacant positions will be filled within one year, and if needed the BDC elections for those seats will be conducted separately.

Block chairpersons are elected at the second tier of the Panchayati Raj system, between the election of panches and sarpanches by the people, and of the election of chairpersons of the District Planning and Development Boards. In a state that has had only four panchayat elections so far (1978, 2001, 2011, 2018), block chairpersons’ elections are being held for the first time. Under the Jammu and Kashmir Panchayati Raj Act, it is the panches and sarpanches, elected at the first tier, who subsequently vote for the BDCs in their respective blocks. The elections are being held for 310 of the 316 blocks in J&K and Ladakh.

As J&K is set to vote today, preparations are underway at polling station number-15 in Rajouri, ahead of Block Development Councils (BDC) elections in the state today. Voting will at 9 AM. Of the 316 blocks, voting will be held in 283 blocks, where over a thousand candidates are in the fray. According to the election department, 853 are independent candidates, while 218 are from the BJP. Candidates in 27 blocks have been elected unopposed. Official records show that while no panch or sarpanch had been elected in two blocks of the Valley, there was no female panch or sarpanch in the four blocks reserved for women — 33 per cent of the blocks have been reserved for women candidates.

The Block Development Council forms the second tier of the Panchayat Raj system in J&K. (File)

In 2018, Panchayat elections were held in nine phases — from November 17 to December 11 — in J&K. Kashmir’s mainstream political parties, including the PDP and NC, had boycotted the elections.

The Srinagar Chief Electoral Officer's announcement came close on the heels of Home Minister Amit Shah stating that there were no restrictions imposed in Kashmir and misinformation was being spread by the Opposition.

Read | NC, PDP and Congress — deciding to boycott the polls

The Valley has been under a security clampdown since August 5 when the Centre modified the provisions of Article 370 to revoke the special status granted to Jammu and Kashmir by the Indian Constitution. J&K was also bifurcated and reduced to a Union Territory.

Asked if the detained mainstream political leaders will be released for campaigning for these polls, Kumar said the present process had a limited electoral college.

"As and when a political party approaches us for ensuring level playing field, we will respond to it. We will be responsive."