Pension scheme, jobs and sops for apple orchards in Congress manifesto ahead of Himachal polls

The manifesto is divided into three parts — Himachal, Himachaliyat and Hum. 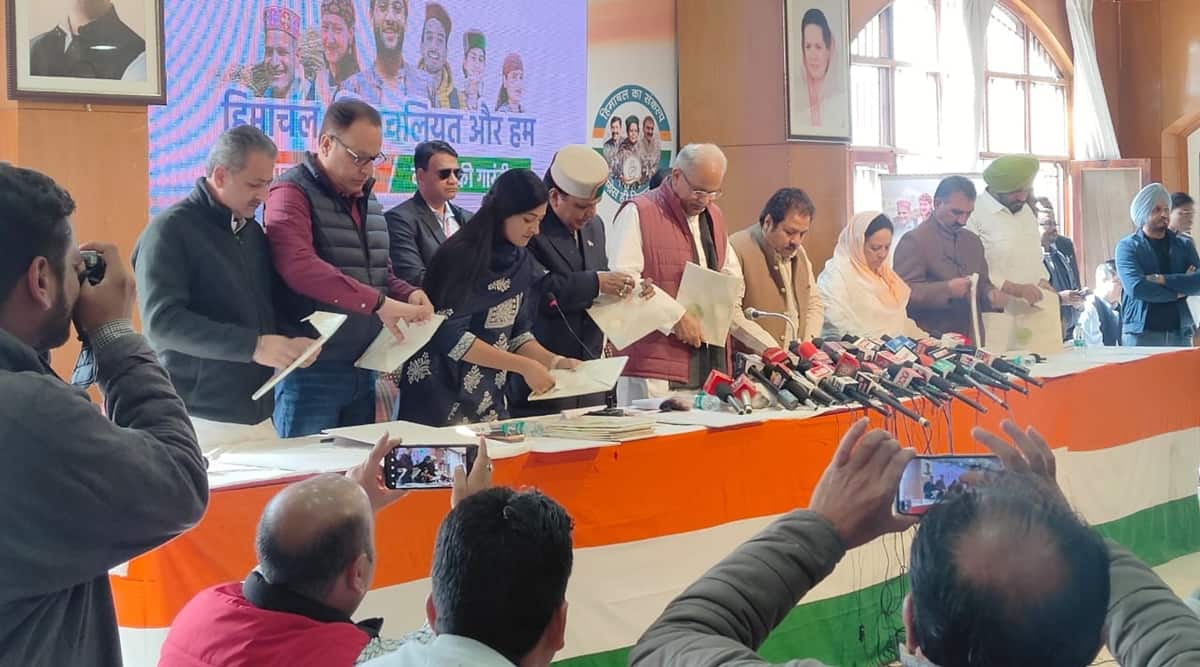 The old pension scheme, jobs, and reforms in the apple plantations are the key promises in the Congress manifesto for the upcoming polls. The party released the document in Shimla Saturday. Titled ‘Himachal, Himachaliyat aur Hum’, the manifesto highlights several policies that the party plans to implement if they win.

The manifesto is divided into three parts — Himachal, Himachaliyat and Hum. Under ‘Himachal’, the party has promised one lakh jobs in the first cabinet meeting and an overhaul of all political decisions taken by the Jairam Thakur government that have “harmed the employees”.

Congress said it will bring in a separate law for land acquisition concerning roads and charge illegal land owners four times the cost of land.

For farmers and apple orchard owners, a separate committee will be formed which will decide on the prices for the crops following consultations with stakeholders. As per category and the recommendation of the committee, an MSP will be announced.

The Congress said if it wins, the government will purchase 10 kg milk from dairy farmers and cow dung at Rs 2 per kg. A subsidy will be given on purchase of four cows per household.

The party will be implementing a ‘Smart Village’ scheme in order to promote tourism. There will be a special grant for animal feed, the manifesto said.

The MLAs will be allocated a budget under ‘Dev Bhoomi Vikas Nidhi’ for developing religious places from a tourism point of view and for infrastructural development, it added.

As a part of the development agenda, the government will be building 5,000 km of new roads in the next five years, the Congress party said.

“The Congress government will be establishing small, medium and big industries of food processing across the state. A ‘Special Food Park’ will be set up in Solan for the processing of mushrooms, apples and tomatoes and vegetables,” the manifesto said.

Under ‘Himachaliyat’, the party has promised doubling of allowance given to temple priests, sponsoring one pilgrimage of senior citizens to any part of the country, promotion of local language among other things.

Unde ‘Hum’ the Congress said it will implement a scheme to ensure employment of 80% youths in private sectors, allocate a fund of Rs 680 crore for start-ups and provide 5 lakhs jobs. A social security pension will also be given to senior citizens above 75 years of age.

A relief fund for journalists will also be set up by the Congress once voted to power.

The Bharatiya Janata Party is likely to launch its manifesto Sunday. “The BJP has nothing to offer. When they had the chance, they did not perform. The prospects of the party are bleak and this is the reason why Prime Minister Narendra Modi has to campaign so much. The change of power is imminent,” said Rajeev Shukla, AICC in charge of Himachal.