Haryana Election Exit Poll Results 2019 LIVE Updates: The BJP-led by Khattar has set a target of winning 75 seats, while the Congress is hoping to recover from its rout and make a comeback in the state.

Haryana Election Exit Poll Results 2019 LIVE Updates: Voting for 90 seats of Haryana, where the BJP is an eyeing an easy victory, has concluded and the state has recorded over 57.04 per cent polling by 5 pm. After stone-pelting in Nuh in the afternoon, a similar incident took place at Booth no. 17 in Kaithal. The police responded with lathicharge to disperse the chaotic crowd.

An incident of stone pelting was reported near a polling booth in Nuh district this morning, following a clash between BJP and Congress supporters. Police said that the incident occurred outside the booth, thus polling was not impacted.

However, the police said that the situation is now under control.

Ahead of voting, Prime Minister Narendra Modi and Haryana CM Manohar Lal Khattar took to Twitter to encourage voters to “enrich the festival of democracy” by voting in large numbers.

Polling is also underway in Maharashtra, where the upbeat BJP-Shiv Sena alliance is seeking a second straight term. Besides the two states, bypolls are underway in 51 Assembly seats and two Lok Sabha constituencies.

With voting for the single-phase assembly elections in Haryana and Maharashtra ending on Monday, a bunch of exit polls predicted a sweeping majority for the ruling BJP in both the states. The run-up to the vote witnessed a campaign which was dominated by the BJP’s aggressive narrative on the nullification of Article 370 and marked by the Opposition’s lacklustre canvassing. The results for Maharashtra’s 288 seats and Haryana’s 90 seats will be announced on October 24. READ MORE 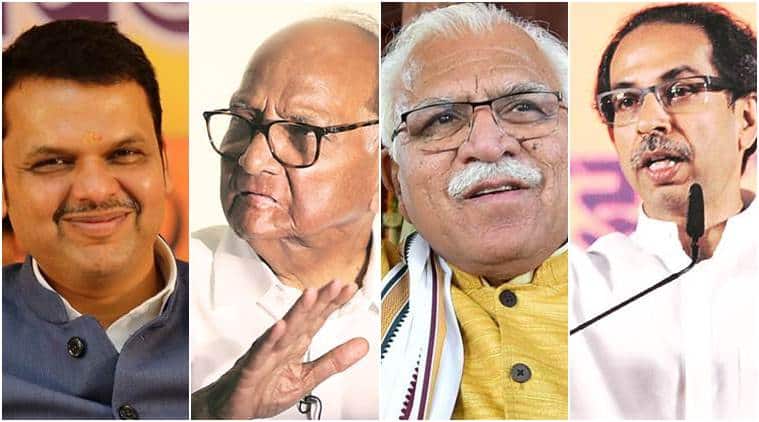 After stone pelting in Nuh, a similar incident takes place at Booth no. 17 in Kaithal. The police are responding with lathicharge to disperse the chaotic crowd.

District-wise polling percentage patterns show that Yamunanagar district leads with 68.11 per cent, followed by Palwal (67.59%) and Jind (67.10%). Gurgaon and Faridabad districts remain the lowest polled at 46.10% and 47.65%, respectively.

Karnal constituency from where CM Khattar is re-contesting, records 39.30% polliing till 3 pm

The polling that began on a brisk note at 7 am shall continue till 6 pm. The Karnal constituency from where Chief Minister Manohar Lal Khattar is re-contesting this time, also polled barely 39.30% till 3 pm. READ MORE 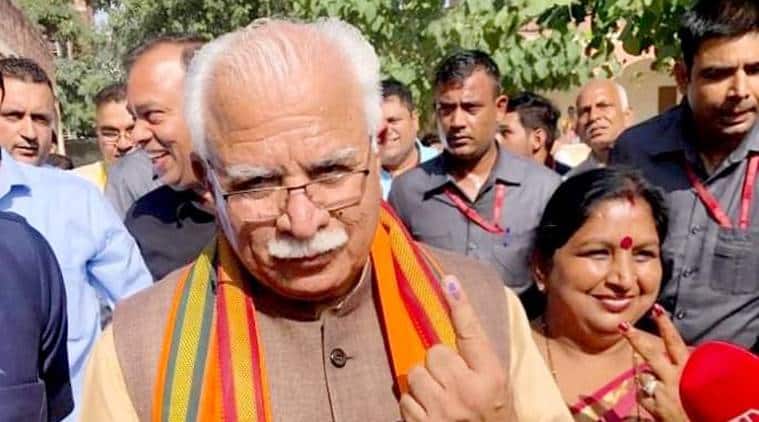 Over 50 per cent voters had exercised their franchise in Haryana in the first eight hours of the polling till 3 pm, today. The polling that began on a brisk note at 7 am shall continue till 6 pm.

Debate before the big decision: Will we ever get respite from water shortage, farming woes? 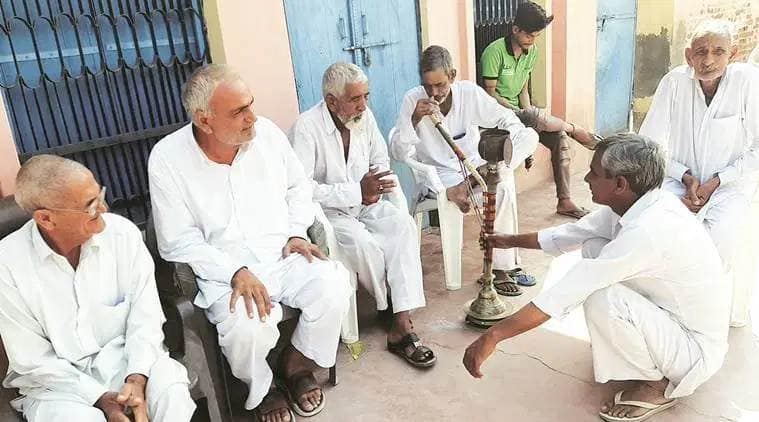 Bijender Singh says the garbage dumping ground near the village is the biggest issue for residents of Dandur, which falls in Adampur constituency. Here, TV actress and TikTok star Sonali Phogat of BJP is taking on former chief minister Bhajan Lal’s son Kuldeep Bishnoi of Congress. With voting underway for Haryana Assembly polls, voters in this part of Haryana are not discussing national issues, but their local problems. “For years we kept raising this issue but nobody cared about our demand. The garage dumped here is causing the spread of serious diseases,” says Bijender, a Dalit. Dandur is situated on the outskirts of Hisar town but falls in Adampur constituency, known as a stronghold of the Bhajan Lal family for the past five decades. READ MORE

Ladwa village of Barwala Assembly constituency. Fewer people show up because of the slow functioning of EVM machines. An incident of stone pelting occurred near a polling booth in Nuh this morning, following a clash between Congress and BJP supporters. Police have said the scuffle occurred outside the booth and did not impact polling. Peace has since been restored in the area.

Taking a dig at the BJP, Congress leader Rahul Gandhi on Monday described the BJP's candidate from Haryana's Assandh as the "most honest man" in the ruling party after a video went viral in which he is purportedly heard saying no matter which button is pressed on the EVM, the vote would go to the BJP. "The most honest man in the BJP," the former Congress president tweeted along with the video.

The most honest man in the BJP. pic.twitter.com/6Q4D43uo0d

A day before elections, the Election Commission issued a showcause notice to BJP’s Assandh candidate, Bakshish Singh Virk, for purportedly making controversial remarks about EVMs in a video clip that went viral on social media. In the 43-second video clip, Singh, a sitting BJP MLA seeking re-election, purportedly says: “Whoever you vote for, it will go to the flower only. Whichever button you want, you can press, but it will be of flower only. We have fitted a part in the machine.”

Virk later dismissed the video as “doctored”, calling it a conspiracy to defame him and his party. 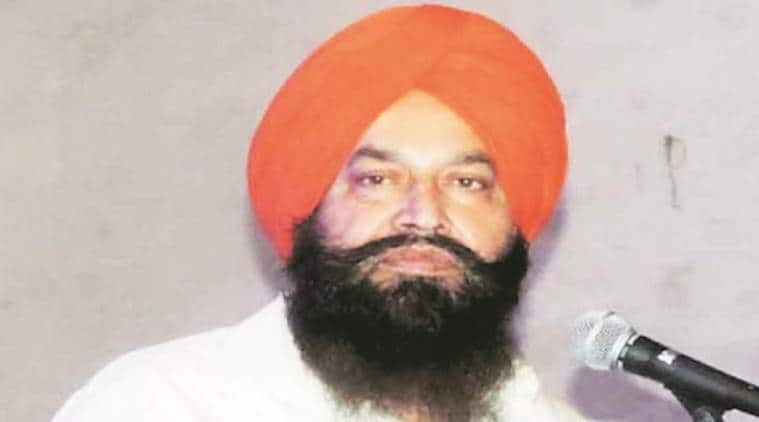 Haryana elections: BJP aims for 75-plus seats, but faces an uphill task in nearly 39

Despite a clean sweep in all 10 Lok Sabha seats in May and a weakened opposition in Haryana, the ruling party could face tough resistance in certain Assembly constituencies. There are at least 39 such Assembly segments out of 90 in Haryana, where BJP has never been able to make sufficient inroads. Besides these, there are 21 Assembly segments where BJP won for the first time in 2014 Vidhan Sabha polls. Read more

Bhupinder Singh Hooda, Haryana’s former Chief Minister and Congress candidate from Garhi Sampla-Kiloi, after casting his vote with his family today said, “There is an undercurrent in favour of Congress. The results on October 24 will ensure that Congress forms the next government in Haryana.” He was accompanied by his wife Asha Hooda, son and former MP from Rohtak Deepender Singh Hooda and daughter-in-law Sweta Mirdha.

Appointed Haryana Pradesh Congress Committee president just a month before the state goes to polls (October 21), Kumari Selja has her task cut out — from handling the faction-ridden party and senior leaders such as former CM Bhupinder Singh Hooda, who has publicly taken divergent positions on Article 370 and the NRC, to taking on the BJP, that won all the 10 seats in Haryana in the general elections this year. While the Rajya Sabha MP and Congress Legislative Party member admits she was appointed the Haryana chief a “little late”, she says the party is working to expose the state government with “renewed vigour”. She also admits October 21 polls are a challenge, but denies differences within state unit will hurt party

A new Lal in Haryana?

At the height of one of the worst crises faced by him — the Jat agitation in 2016 — Manohar Lal ‘Khattar’, derided for being a “Punjabi” and an “outsider”, in a deeply clan-bound state that has no love lost for either Punjabis or outsiders, announced that he was dropping his surname. Three years later, that is far from an issue. Instead, Haryana may well be witnessing the addition of another ‘Lal’ to its famous troika of Devi Lal, Bhajan Lal and Bansi Lal: Manohar Lal.

BJP candidate and state finance minister Captain Abhimanyu cast his vote for the Narnaund Assembly seat. Jassi Petwar of the Indian National Lok Dal (INLD) and Baljeet Sihag of the Congress are also vying for the seat.

A surprise choice for Chief Minister in 2014, Manohar Lal Khattar has survived many a crises, including the Jat agitation that led to 20 deaths, even as the BJP has gone from strength to strength in Haryana. However, with both 2014 and 2019 seen as essentially Modi wins, Khattar has a point to prove with the coming Assembly polls. 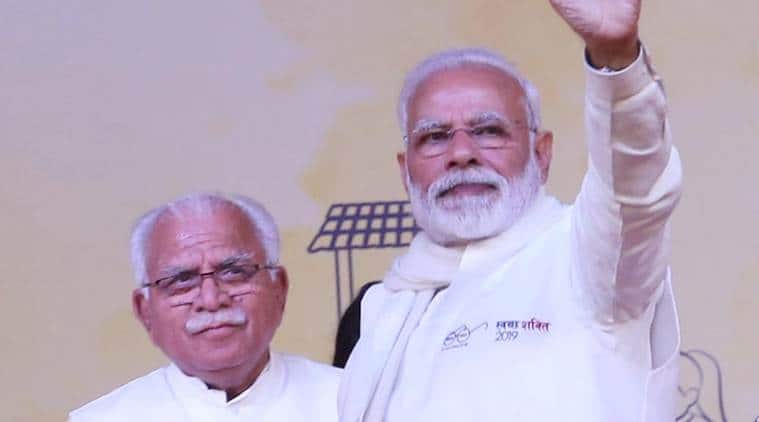 Haryana CM Manohar Lal Khattar rides a cycle to the polling booth. Khattar took the Shatabdi Express from Chandigarh to his hometown Karnal to cast his vote this morning. "First vote, then eat. I am going to cast my vote," the chief minister tweeted, sharing pictures on his personal account. "I humbly request all citizens of the state that you too must exercise the franchise by visiting your polling station. Your one vote is crucial to form a strong government," he added.

The high-voltage campaign for the state came to end on October 19. The polls have slowly emerged as a contest between BJP’s “nation-first” poll pitch combined with Chief Minister Manohar Lal Khattar’s five-year tenure in the state and opposition’s questions on “deteriorating economy and unemployment” and various state-specific issues.

On the other hand, Congress high command appeared to have abandoned the state and left it to its newly appointed state unit chief Kumari Selja and former chief minister Bhupinder Singh Hooda. Although, both Selja and Hooda addressed over 30 public rallies, but neither Sonia Gandhi, nor former prime minister Manmohan Singh campaigned here. Party leader Rahul Gandhi addressed only two public rallies, including one in Nuh and another in Mahendragarh and that too in the last lap of the campaigning.

In 2014, BJP had won 47 seats – its best ever performance in Haryana, and formed the government with absolute majority. INLD had got 19, Congress 15 and Haryana Janhit Congress (which later merged into Congress) had got two.