Gujarat Assembly Election, Himachal Assembly Elections 2022 Highlights:  BJP means stability and service in Himachal Pradesh, PM Narendra Modi said in the poll-bound state on Saturday.  At a public rally in Mandi’s Sundernagar, Modi said development will the first priority of the party. Expressing confidence that Himachal will vote for BJP on November 12, Modi said,  every vote cast will define Himachal’s development journey for next 25 years.” Modi began his speech paying tribute to Independent India’s first voter Shyam Saran Negi who died Saturday. “I came to know about sad demise of Shyam Saran Negi, first voter of Independent India, who passed away at the age of 106. On Nov 2,he voted for the Himachal polls through postal ballot. He fulfilled his duty before he died, it should motivate every citizen,” he said.

The Congress Saturday released its manifesto for the Himachal Pradesh Assembly polls, promising one lakh government jobs if they come to power in the state. The party also promised to implement the old pension scheme, offer 30 units of free electricity, and open a Rs 10 crore ‘StartUp fund’ in each constituency. The manifesto was launced in Shimla in the presence of  Chhattisgarh Chief Minister Bhupesh Baghel, AICC in-charge for Himachal Rajeev Shukla, former PCC chief Sukhwinder Singh Sukhu and AICC secretaries Tejinder Pal Bittu and Manish Chatrath.

Meanwhile, in a major set back to congress in Gujarat ahead of Assembly polls, Congress leader Himanshu Vyas quit the party on Saturday. The leader from Gujarat was the secretary and in-charge of Overseas Congress. In a letter to Congress President Mallikarjun Kharge, he wrote: “I hereby resign as secretary of the All India Congress Committee and in-charge of Overseas Congress. I also resign from the party’s primary membership.”

Prime Minister Narendra Modi will address a public meeting in Valsad district of poll-bound Gujarat on Sunday and attend a mass marriage programme in Bhavnagar, a BJP functionary said on Saturday.

This will be the first visit of the prime minister to his home state after the elections were declared by the Election Commission.

“PM Modi will address a rally in Nana Pondha in Valsad district on Sunday afternoon. He will attend a mass marriage function in Bhavnagar in the evening,” BJP spokesperson Yagnesh Dave said.

Elections will be held in Gujarat in two phases on December 1 and 5. The counting of votes will be taken up on December 8. (PTI)

Delhi Deputy Chief Minister and senior AAP leader Manish Sisodia Saturday appealed to the people of poll-bound Himachal Pradesh to give his party a chance and make a "new-engine" government in the state this time.

Referring to the "double-engine government" motif of the BJP's poll campaign, he alleged that it took Himachal Pradesh in the wrong direction and not towards good schools, good hospitals and jobs. The Aam Aadmi Party (AAP) is a new party in the state and people should give it a chance, the Delhi deputy chief minister said.

About the Congress' poll promise of reviving the old pension scheme, he alleged it was bluffing on the issue. "No state other than Punjab has implemented the Old Pension Scheme," he said. (PTI)

Counting of votes for crucial Bihar bypolls on Sunday

Votes will be counted for the by-elections to the Mokama and Gopalganj assembly seats in Bihar on Sunday.

The counting will begin at 8 am amid tight security arrangements, an election official said on Saturday. The polling was held on November 3, and 52.3 per cent votes were cast.

The Mokama seat fell vacant as RJD MLA Anant Singh was disqualified after his conviction in an Arms Act case, while the by-election in Gopalganj was necessitated due to the death of BJP MLA Subhash Singh. The elections are crucial as this is the first face-off between the ruling Mahagathbandhan and the opposition BJP after the new government came to power in the state in August. (PTI)

Prime Minister Narendra Modi on Saturday cautioned the people of Himachal Pradesh against "selfish groups", saying they call themselves 'kattar imaandaar (very honest)' but are the most corrupt and conspire to divide the society.

His remarks were seen by many as an attack on the Aam Aadmi Party which often describes itself as 'kattar imaandaar' and is also in the fray along with the Congress to challenge the BJP in the hill state.

Attacking the grand old party, he alleged that the Congress means a "guarantee" of corruption, selfish politics and nepotism. The BJP's work and resolve are strong while in the Congress there is uncertainty, indecisiveness and anarchy, Modi said. (PTI)

“Main Harish Nadda, J P Naddaji ka beta,” says the 27-year-old, the younger of the two sons of the BJP national president, who has hit the campaign trail in the family’s home district, where the party is possibly facing its biggest rebel challenge in the state.

The locals approve, seeing in the Supreme Court and Delhi High Court lawyer the next leader from the family and a future candidate. Blessing Harish in Kandrour village, a woman assures him that her vote is with the BJP: “Mere mayke se hain voh (Naddaji is from my parent’s village).” Navjeevan Gopal writes

Congress leader Priyanka Gandhi said if the party comes to power in the state, it will implement the Old Pension Scheme, the way it did in Chhattisgarh and Rajasthan.

"Lakhs of employees contributed in making Himachal through their hard work. The old pension was the support of the employees and their families. BJP snatched old pension. We give priority to the interests of the employees. Old pension implemented in Chhattisgarh and Rajasthan. We will implement OPS in Himachal also," she tweeted.

The ruling BJP in Gujarat on Saturday launched an 11-day campaign named ‘Agresar Gujarat’, seeking public suggestions for the party’s manifesto for the upcoming Assembly elections. The party also ruled out anti-incumbency and said it would emerge victorious with a record number of seats in the 182-seat legislature.

BJP state president C R Paatil launched the campaign, which will run from November 5 to 15, at the BJP headquarters in Gandhinagar. “We will scan the suggestions and will try to include those which can be implemented on the ground in our manifesto,” Paatil said, addressing the media.

Paatil said that 78 per cent of the promises made by the BJP in 2017 had been implemented. Read more

AAP candidates for Gujarat, being decided by BJP, alleges Cong

The Congress on Saturday alleged that the AAP was working in collusion with the BJP for the upcoming Gujarat assembly polls and the candidates of the Arvind Kejriwal-led outfit were being decided by the saffron party.

Former Gujarat MLA Indranil Rajguru, who quit the Aam Aadmi Party to rejoin the Congress on Friday, said he was asking for tickets for 15 AAP leaders who were in a strong position to win but tickets were being given to candidates "who could help the BJP in the polls".

"I took a stand against this because I had joined AAP to defeat the BJP not the Congress. I was told, 'don't be stubborn, the list comes from Kamalam (BJP office in Gujarat)," Rajguru claimed on Saturday at a press conference at the AICC headquarters here.

Rajguru, who had joined the AAP after quitting the Congress in April this year, returned to the old party, citing that it was the best option for defeating the BJP in Gujarat. (PTI)

During its regime, Congress always took commissions in defence deals and committed scams of thousands of crores, Prime Minister Narendra Modi said during a rally in Himachal Pradesh's Mandi on Saturday.

Making false promises and giving false guarantees has been an old trick of the Congress, PM Modi said while addressing a rally in Himachal Pradesh's Mandi. He added that the Congress never gave priority to the development of Himachal. "BJP has fulfilled its promises made to the people," Modi said.

'Every vote cast on Nov 12 will define state's development journey for next 25 years,' says Modi

At the poll rally in Himachal Pradesh's Mandi, Modi said every vote cast on Nov 12 will define state's development journey over 25 years.

Changing govt in every five years the reason for Himachal's underdevelopment, says Modi

PM Narendra Modi said the reason for Himachal's underdevelopment is the custom of changing governnment in every five years.

PM Narendra Modi said the people of Himachal should know that BJP means stability, service in the state. He also said development will be the top priority of the party.

Addressing public in Himachal's Mandi, PM Narendra Modi paid tribute to Independent India's first voter Shyam Saran Negi. "I came to know about sad demise of Shyam Saran Negi, first voter of Independent India, who passed away at the age of 106. On Nov 2,he voted for the Himachal polls through postal ballot. He fulfilled his duty before he died, it should motivate every citizen," he said.

Meanwhile in Mandi, an 'excited' crowd gather for Modi

A large crowd has already gathered in Mandi's Sundernagar ahead of PM Modi's rally. "People have come from far away. They are excited about the rally," a man present at the rally told news agency ANI.

"People have come from far away. They are excited about the rally," says a man present at the rally. #HimachalPradeshElections pic.twitter.com/buybQHcOAs

‘Himachal, Himachaliyat aur Hum': Key promises of Congress for the people of Himachal

Ahead of the November 12 Himachal Pradesh Assembly elections, the Congress Friday released its poll manifesto in the presence of Chhattisgarh Chief Minister Bhupesh Baghel in Shimla on Saturday.

In the election manifesto titled ‘Himachal, Himachaliyat aur Hum‘, the Grand Old Party promised to sanction one lakh government jobs in the first cabinet meeting itself, offer 300 units of free electricity, and a subsidy on the purchase of four cows per household, if voted to power.

Congress leader Himanshu Vyas  has resigned from the party. Vyas was the secretary of AICC from Gujarat. 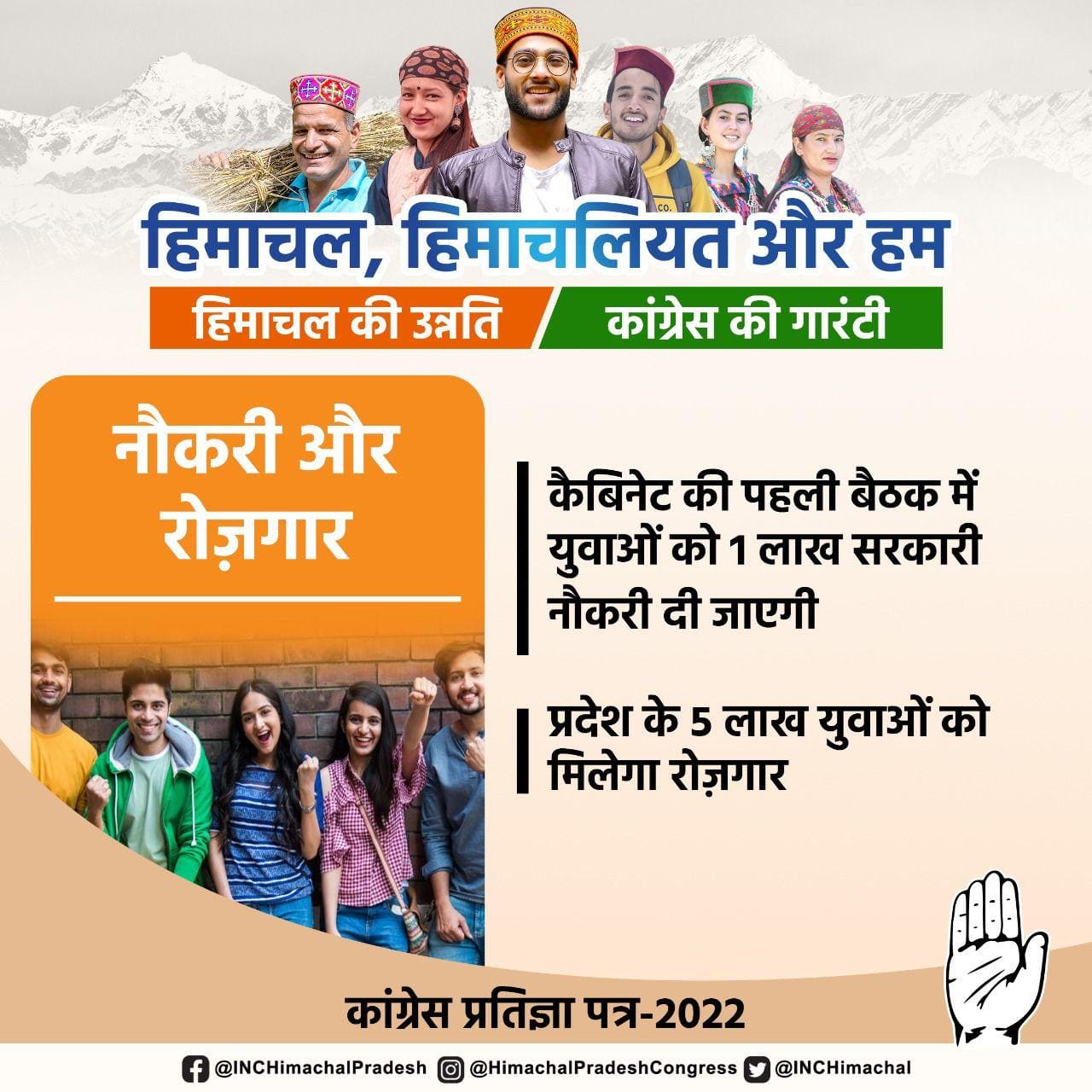 MSP for all varieties of Apples, corruption free and transprarant administration are some of the promises of Congress party for people of Himachal. The party in its manifesto also said they will fill all the vacant posts in the government department in three months.

Not a hobby, but compulsion: former journalist Isudan Gadhvi is AAP’s CM face in Gujarat

Making this announcement Friday, AAP chief and Delhi Chief Minister Arvind Kejriwal said, “We don’t decide sitting in a room who will be a CM candidate. Bhagwant Mann was chosen as CM not by AAP, but by Punjab’s public. At a time when it seems sure that AAP will form the government, today we are not announcing the name of the CM candidate of AAP but announcing the CM for the next Gujarat government.”

“A week ago, we solicited public opinion and 16,48,500 responses were received, and 73% of them took Isudanbhai Gadhvi’s name,” he said.

Gujarat polls: Congress names 43 in its first list of candidates

Former Gujarat Pradesh Congress Committee (GPCC) President Arjun Modhwadia, who had lost the 2017 elections, is back in the poll fray for the Congress from Porbandar.

In a late night development Friday, Congress declared its first list of 43 candidates for the upcoming Gujarat Assembly elections. The Congress has fielded Rajya Sabha MP Amee Yagnik from Ghatlodia assembly seat, which is currently being held by Chief Minister Bhupendra Patel.

Though BJP is yet to announce its candidates, Patel is expected to contest again from the same seat.