Piyush Patel alleged that a group of around 25 youths who are supposed to be close to his rival Congress candidate Anant Patel attacked him at Jari village and damaged his car. 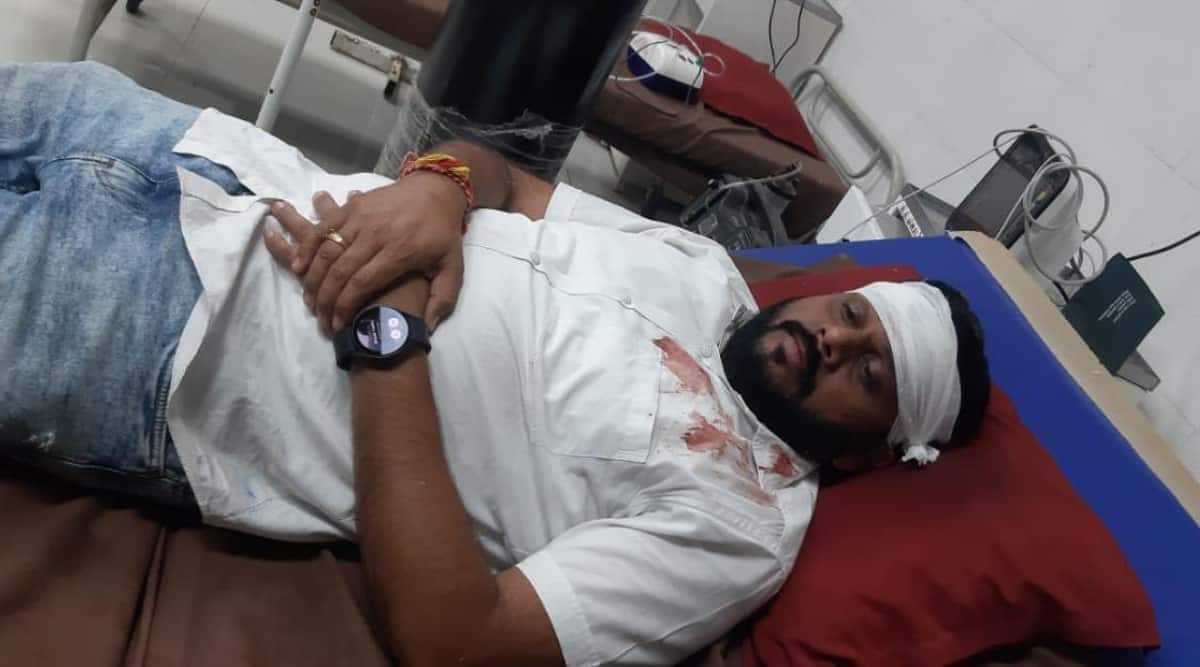 Patel who suffered head injury was later discharged from Vansda Cottage Hospital after treatment. His condition is reported to be stable, police said. (Facebook/BJPVansada)

Hours before the first phase of Gujarat Assembly elections began, the BJP candidate of Vansda in Gujarat’s Navsari district was physically assaulted allegedly by a mob of Congress workers brandishing wooden sticks in the early hours of Thursday, police said.

Piyush Patel, the BJP candidate, alleged that a group of around 25 youths who are supposed to be close to his rival Congress candidate Anant Patel attacked him at Jari village in Vansda taluka around 2 am. Patel who suffered head injury was later discharged from Vansda Cottage Hospital after treatment. His condition is reported to be stable, police said.

Piyush Patel, 37, a resident of Manpur village in Vansda taluka lodged a police complaint against Congress workers Dhanji Patel, Thakore Patel, Jayesh Patel, and 20 others, all residents of Jari village.

Patel who cleared the Gujarat Public Service Commission (GPSC) exams in 2012 recently quit his government job as a deputy ‘mamlatdar’ at Vansda taluka and entered the poll fray on a BJP ticket.

In his complaint, Patel alleged that he was returning home from Chikhli along with his cousin Nirav Patel, in a car driven by Sunny Patel, while his supporters were travelling in other three cars.

“As the convoy reached the Ram temple in Jari they found the road blocked with tree branches and a group of around 25 youths armed with wooden sticks. Congress workers Dhanji Patel, Thakore Patel and Jayesh Patel, and other strong supporters of Congress candidate Anant Patel were allegedly present in the group,” he said in the complaint.

In his complaint Patel mentioned that Congress worker Dhanji Patel asked if he was a BJP candidate and where he and his convoy were heading to. “When I said I was from the BJP, the men attacked my car with sticks. The glass panes of the car broke and a few hit my head. They also attacked three other cars in the convoy,” he said.

The BJP candidate soon reported the matter to Vansda police.

Deputy Superintendent S K Rai along with Vansda police inspector B M Chaudhary took the statements of Piyush Patel from the hospital. They have registered a case against Dhanji Patel and others. Vansda police had registered a case under sections 143 (unlawful assembly), 147 (rioting), 149, 323 (voluntarily causing hurt) and 427 (committing mischief) of the Indian Penal Code.

“The miscreants knew that they knew that I was returning to my village. They confirmed if I was the BJP candidate from the Vansda seat and only then did they attack my car. They also attacked three other cars which followed me. I was assaulted under the direction of Congress candidate Anant Patel. At present, I am alright and involved in election-related activities,” Piyush Patel told The Indian Express.

“We have sent our teams to Jari village to nab the three accused who have been identified. We will soon arrest all those involved in attacking Piyush Patel,” Chaudhary said.

Does muscle turn into fat if I skip my exercise routine?