Chhota Udepur and Panchmahal districts recorded 62.04 per cent and 62.03 per cent, respectively. 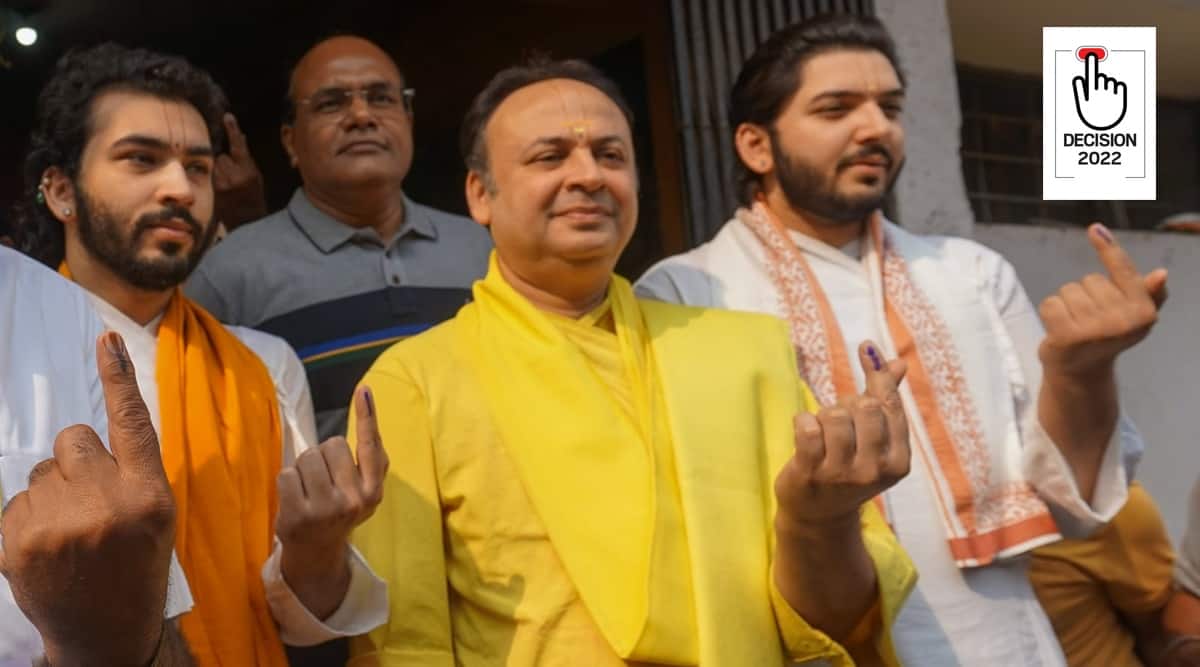 Spiritual leader Dwarkeshlalji Maharaj after casting his vote along with his sons in Vadodara on Monday. (Express Photo by Bhupendra Rana)

In the second phase of Gujarat assembly elections on Monday, Vadodara district recorded a voter turnout of 56.75 per cent until 5 pm.

Vadodara city recorded 49.69 per cent voting till 3 pm Monday. Nodal officers of the district election department sealed EVM machines at the end of polling. The EVMs from city polling centres will be stored in the strong room at the Polytechnic College of Maharaja Sayajirao University (MSU), where the counting will be held on December 8.

In Anand constituency, a faulty EVM at one polling centre in a madrasa was replaced by election officers within minutes. In Godeli booth under Goghamba taluka of Panchmahal district, former BJP MP and current Congress candidate from Kalol assembly constituency, Prabhatsinh Chauhan – who parted ways from the BJP and joined the Congress in November – alleged that the booth agent of the BJP candidate was involved in bogus voting. As Chauhan and the BJP workers got engaged in a heated altercation at the polling station, officials of Rajgadh police station intervened and dispersed the crowd, advising Chauhan to leave. Chauhan has also contended that his car was attacked by the BJP and the windscreen was smashed. The police are yet to lodge an official FIR in the matter.

In Godhra city, sitting MLA CK Raulji of the BJP along with his family cast his vote at the Vavdi Buzarg polling station.

In Nadiad, sitting MLA Pankaj Desai, who cast his vote at a primary school in Nadiad, said: “I have cast my vote as part of the celebration of democracy. I am a five-term MLA and I am confident of winning the sixth term. I am familiar with the mood of the people and the citizens have placed immense trust in Narendra Modi and his vision. There is only a one-sided contest here… People of Nadiad know how hard Modiji is working to ensure that people do not have to migrate to other countries…”

Manjalpur MLA Yogesh Patel, who is seeking an eighth term, cast his vote at New Era Girls’ school and said: “I am contesting for an eighth term. I have won the first seven terms with a good majority and this time, too, I will win with a big majority… The voting turnout may be low during the first few hours but it will increase during the day. I appeal to the citizens, especially the youth, to join the polling in big numbers.”

In Savli, sitting BJP MLA Ketan Inamdar visited the Bhimnath Mahadev temple before casting his vote and said, “Every citizen should cast his vote on this day… I have sought the blessings of my elders and cast my vote too. I am appealing to all people to come out to the polling stations and vote.”