Yogi Adityanath: From Gorakhnath Mandir to Lucknow via Parliament, now a second term as CM

As the BJP won Uttar Pradesh, Yogi Adityanath was set to make history as the first Chief Minister to return to power in the state after a five-year term. It is also the first time a party has come back to power in UP since 1985. 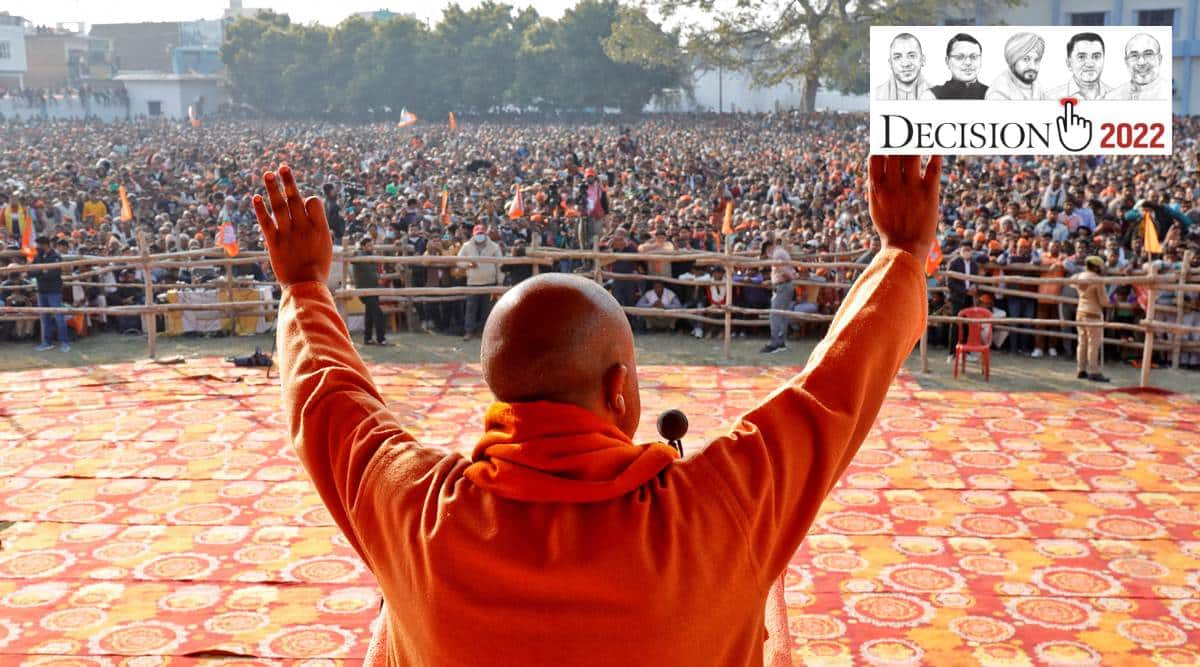 Yogi Adityanath is now one of the BJP’s prime campaigners beyond UP, and a leader who has risen above the party in the state to cast it in his image. (File)

AS THE BJP won Uttar Pradesh, Yogi Adityanath was set to make history as the first Chief Minister to return to power in the state after a five-year term. It is also the first time a party has come back to power in UP since 1985.

His influence restricted to a small region around the Gorakhpur Mutt, of which he was the head priest, apart from him being a five-time MP from the Gorakhpur seat, Adityanath was a surprise pick as CM by the BJP central leadership five years back.

Also Read |The big losers in the 2022 UP Assembly elections

The circumstances of his crowning, amid talk of the BJP hand being forced, are now long forgotten. Today, Adityanath, just 49, is the most-talked-about CM in the country, one of the BJP’s prime campaigners beyond UP, and a leader who has risen above the party in the state to cast it in his image. Many of the controversial decisions taken by his government went on to be adopted by other states, like his anti-conversion law. Other such decisions the Adityanath government pressed on with, despite controversy were the crackdown on illegal slaughterhouses, introduction of anti-Romeo squads, action against land mafia, and recovery notices issued to anti-CAA protesters.

Improvement of law and order was one issue on which the Adityanath government seemed to have the most support on the ground, with the BJP repeatedly talking of its crackdown on mafia, and the Opposition’s criticism of the state’s “thoko neeti (encounter policy)” cutting no ice.

The fear that the Adityanath government was perceived as pro-Thakur, and would end up turning off the other upper caste of Brahmins, seems to have not hurt the BJP much. Before the polls, the BJP constituted a four-member committee to draw up a strategy and programmes to woo the Brahmin community.

A comfortable win also settles any remaining doubts about Adityanath’s leadership of the state BJP. There has often been talk about his brusque style, propensity to strike out on own.

However, in the run-up to the polls, the central BJP sent a clear message that Adityanath was their man. Apart from both Union Home Minister Amit Shah and Prime Minister Narendra Modi asking people to vote for him, Adityanath occupied a prominent place at the BJP National Executive in November in New Delhi last year, where he tabled the party’s 18-point political resolution, even as CMs of other BJP-ruled states joined the meeting virtually.

Adityanath, the ‘Hindu Hridya Samrat’ as his supporters call him, is a science graduate from Garhwal University in Uttarakhand. He credits his political grooming to his mentor, former BJP MP Mahant Avaidyanath, who took him under his wings and announced that Adityanath would succeed him as head of Gorakhnath Mandir in Gorakhpur. That was on February 15, 1994, and Yogi was then 22.

Born in Panchur area of Garhwal district of present day Uttarakhand in 1972. Adityanath had, in his affidavit for the 2014 Lok Sabha and 2017 Assembly elections, written Mahant Avaidyanath’s name in the column for father’s name.

Associated with the ABVP during his university days, Adityanath entered mainstream politics in 1998 when Avaidyanath vacated his parliamentary seat for him. He would go on to win five consecutive elections from Gorakhpur – from 1998 to 2014. Adityanath had in March 2007 burst into tears in Parliament when he began describing the “political conspiracy’’ that led to his arrest in Gorakhpur. The BJP MP had spent 11 days in detention after being arrested in January for violating prohibitory orders in the communally sensitive eastern UP town.

In his first parliamentary election this time, Adityanath won his seat by more than 1 lakh seats over his SP rival.

Deeply involved in the running of the Gorakhnath Mandir, Adityanath remains active at the Mutt, which he visits at least once every fortnight. His association with the Mutt is believed to have increased its footfall manifold in the past five years.

There was a time before 2017 that due to his clout in Gorakhpur, Adityanath’s supporters wouldn’t display the registration numbers on their vehicles, instead their number plates read ‘Yogi Sevak’. After Adityanath took over, volunteers of his Hindu Yuva Vahini have kept a low profile.

The only setback Adityanath received personally in his term as CM was the defeat of BJP candidate Upendra Dutt Shukla against the Opposition’s alliance in the 2018 Lok Sabha by-polls necessitated following his resignation from his Lok Sabha seat. Shukla’s widow contested the Assembly election against Adityanath from Gorakhpur Urban as an SP candidate.

From student Cong leader to AAP candidate, this 35-year-old took down SAD president