Marathons to freebies: every party wants the woman vote in Uttar Pradesh

🔴 In its manifesto, SP ally RLD has announced reservation for women in government jobs and promised that those with record of crimes against women would be denied tickets. 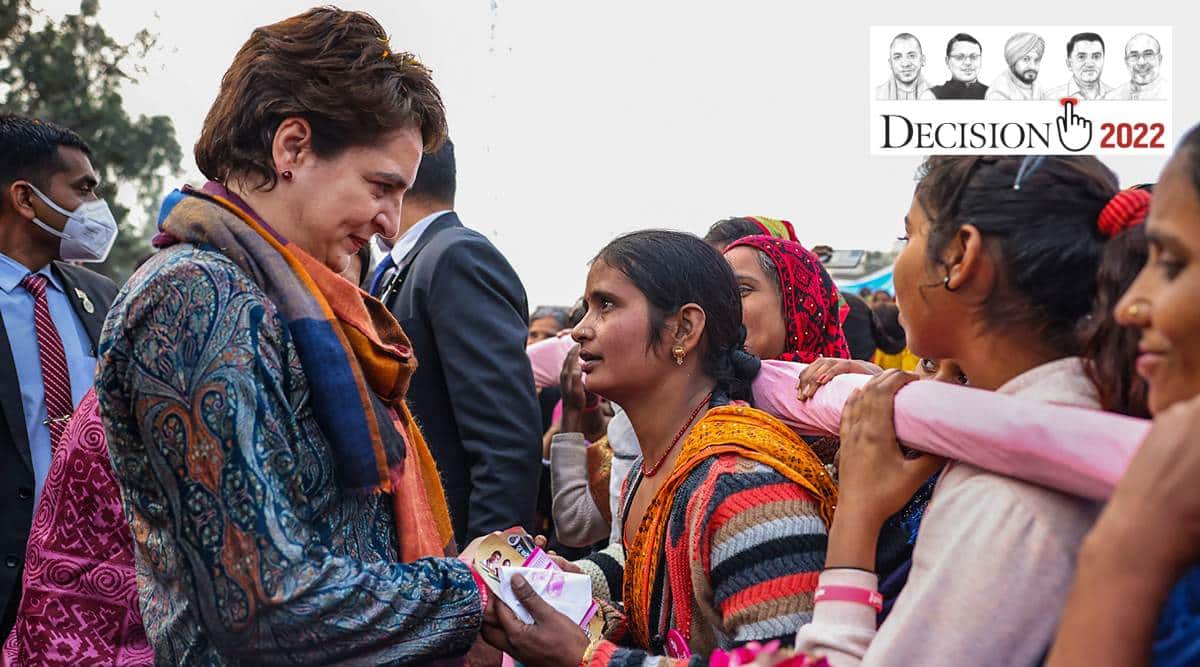 The Congress, led by Priyanka Gandhi Vadra, has held a number of events focused on women in Uttar Pradesh. (PTI)

Last month, Prime Minister Narendra Modi addressed an all-woman gathering of self-help groups in Prayagraj. The Congress, led by general secretary Priyanka Gandhi Vadra, has based its entire campaign on women. The Samajwadi Party and the BSP are doing all they can to impress women voters. The Jat-dominated RLD isn’t far behind, promising reservation in jobs for women.

In Uttar Pradesh, a state where caste and religion usually blur all other considerations during polls, this season, political parties are tripping over each other to get women voters behind them.

Data show that over the last few elections, women voters — or “aadhi abadi”, as political parties have been referring to the demographic that makes up 46.5 per cent of the state’s voters — have risen not only numerically, but there has been a steady rise in the numbers coming out to vote and those ending up on the winning side, making them a significant target group for all political parties.

On January 8, when Chief Election Commissioner Sushil Chandra declared the polls, he informed that the number of voters in Uttar Pradesh is now about 15 crore, of which women voters account for almost 6.98 crore and men about 8 crore. He said that of the five states headed to the polls, Uttar Pradesh has witnessed the maximum rise in the number of women voters — an addition of almost 52 lakh women voters since the last election. In 2017, of the total 14.16 voters, 6.46 crore were women and 7.7 crore men.

More coming out to vote

This number has been going up steadily.

This was again higher than in 2007, when the BSP formed the government. Of the 5 crore women voters, just about 42 per cent or 2.1 crore, came out to vote as opposed to 49.53 per cent among men.

The ruling BJP is doing its best to ensure women voters, who are said to have voted for the party in big numbers in the previous election, stay on.

The party has entrusted Geeta Shakya, Rajya Sabha member and its mahila morcha chief, to run an online campaign focused on ‘Kyon Uttar Pradesh ki mahilaen kehti hain ki Yogi sarkar jarori hai? (Why UP’s women say Yogi government is needed)’. As part of the campaign, party leaders have been asked to talk about the women-centric schemes of the state and Central governments.

The Congress, arguably the weakest pole this election, has, however, managed some attention for its campaign that’s based entirely on women, with its marathons for girls ending up as a big draw. The party, which started off with a promise to set aside 40 per cent poll tickets for women, on Thursday announced 50 women candidates as part of its first list. The party has also come out with a special manifesto promising reservation in jobs, free bus services, free electric scooters as well as smartphones for women.

“The political narrative is changing. Women’s empowerment is no longer about toilets or free cylinders but about financial and social independence…,”said Congress leader Supriya Shrinate, who has been travelling with Priyanka as part of the ‘Ladki hoon, Lad sakti hoon’ campaign.

The Samajwadi Party has also come up with a host of measures focused on women. Apart from talking about 1090, the women’s helpline launched by the party during its previous term, and other schemes such as the Samajwadi pension for women and financial assistance for women sportspersons, the party has coined the slogan, “Uttar Pradesh ki nari, Bhajapa par paregi bhari”, to allege that women have had to face hardships during the BJP government.

The BSP, meanwhile, has been talking about how it’s the only party to have had a woman CM in the past and how it’s a strong votary of the 33 per cent reservation for women in the Lok Sabha and the state Assembly.

In its manifesto, SP ally RLD has announced reservation for women in government jobs and promised that those with record of crimes against women would be denied tickets.