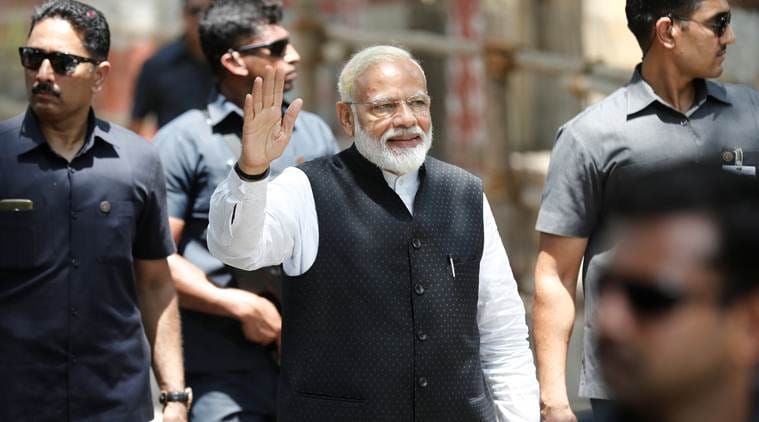 The EC has received four more complaints from the Congress and one from the CPM against the PM’s remarks at poll rallies. Narendra Modi.

As the Supreme Court said it will hear Tuesday a Congress plea seeking direction to the Election Commission (EC) to act on complaints it made about alleged violation of the Model Code of Conduct (MCC) by Prime Minister Narendra Modi and BJP president Amit Shah in their speeches, The Indian Express has learnt that the full Commission has not had a single deliberation since April 5 on the alleged violations by Modi.

Since then, the EC has received four more complaints from the Congress and one from the CPM against the PM’s remarks at poll rallies. A meeting of the full Commission is usually convened twice a week to discuss important matters including complaints of MCC violations. The three commissioners should have ideally met at least six times since the first complaint was lodged with the Commission.

The first complaint against the PM on April 5 was regarding a rally in Wardha on April 1 in which Modi, referring to Congress president Rahul Gandhi’s decision to also contest from Wayanad, said the party is “running away from majority-dominated areas” to “take refuge in areas where the majority is in minority”.

Responding to an email from The Indian Express asking why the full Commission had not held a single deliberation on the complaints against the PM, EC spokesperson Sheyphali B Sharan wrote, “All pending complaints with ECI including those concerning PM (Prime Minister), Party President of BJP and INC will be discussed in Commission’s meeting tomorrow ie. 30.4.19. If required, another meeting of the Commission will be held on 1st May, 2019 to dispose off these cases.”

At a press conference Monday evening, Deputy Election Commissioner Chandra Bhushan Kumar told reporters that the complaints regarding Modi, Shah and Gandhi will be decided Tuesday. The BJP had lodged a complaint with EC on April 16 against Gandhi for repeatedly using the phrase “chowkidar chor hai”.

Deputy Election Commissioner Sudeep Jain said decisions are preceded by a lot of “due diligence” and that EC has to take a “comprehensive view” of an issue before disposing it.

The other complaints against the PM relate to his remarks elsewhere: On April 6, in Nanded, Maharashtra, he again referred to the Wayanad seat as one where the “country’s majority is in minority”. On April 9, Modi urged first-time voters to dedicate their vote to the soldiers who carried out the Balakot air strikes and martyrs who lost their lives in the Pulwama terror attack. As first reported by The Indian Express on April 14, the Osmanabad District Electoral Officer, in his report submitted to the Maharashtra Chief Electoral Officer, had found that this remark was “inconsistent” with EC’s instructions prohibiting the use of armed forces for political gains.

On April 21, while speaking in Patan in Gujarat, Modi, while referring to himself in third person, said he had 12 missiles ready and that had Pakistan not announced the return of Wing Commander Abhinandan then it would have had to face “qatal ki raat”. On the same day, addressing a rally in Barmer in Rajasthan, he had warned Pakistan saying that India’s nuclear arsenal is not meant for Diwali. “Every other day they used to say ‘we have nuclear button, we have nuclear button’. What do we have then? Have we kept it for Diwali?” he said.

In the Supreme Court Monday, senior advocate Abhishek Manu Singhvi, who appeared for Silchar MP and Congress leader Sushmita Dev, mentioned the plea before a bench headed by Chief Justice of India Ranjan Gogoi which agreed to list it.

Dev said that “since March 10, 2019 i.e. the date on which General Elections 2019, were notified, the Prime Minister, Mr Narendra Modi and the BJP President, Mr Amit Shah, specifically in sensitive areas and States, have ex-facie violated the provisions of the RP Act and the Election Rules and the process, thereof.”

“It is in public domain that they have indulged in hate speeches, repeatedly used the armed forces for political propaganda, despite a clear prohibition on the same by the Respondent/ECI”, she claimed, adding “furthermore, the Prime Minister in blatant violation of the MCC held a rally on the day of polling in Gujarat on April 23 rd, 2019 i.e. date of voting for the third phase of the election”.

Her petition said that the Congress had moved several representations to the poll panel since the proclamation of the MCC regarding the violation of electoral laws including the Model Code.

The Commission, she said, had acted against other candidates who were found to be breach of the electoral laws including the Model Code and were even banned from campaigning for 72 hours. “However, the Respondents are guarded and oblivious to the comprehensive Representations/Complaints (duly supported by the cogent evidence) that have been filed by the Petitioner’s party against the Prime Minister and Mr Amit Shah”.

Dev stated that the “inaction” by the poll panel “is a tacit endorsement of the statements and clean chit to the individuals whose statements and actions are ex facie in violation of the provisions of the RP (Representation of the People) Act and the Election Rules 1961 including the MCC”.

Will bring over 30,000 madrasas under Govt control: Pakistan