The Election Commission Wednesday gave a second clean chit to Narendra Modi for his appeal to first-time voters by invoking the Balakot airstrikes in Latur, Maharashtra, on April 9. 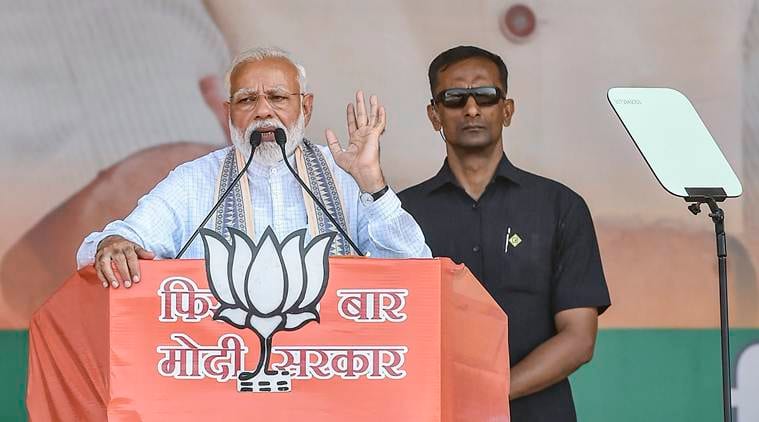 A day after it cleared the Prime Minister’s speech at Wardha under the Model Code of Conduct (MCC), the Election Commission (EC) Wednesday gave a second clean chit to Narendra Modi for his appeal to first-time voters by invoking the Balakot airstrikes in Latur, Maharashtra, on April 9.

This time, however, the Commission went against the opinion of the Maharashtra Chief Electoral Officer (CEO) and the Osmanabad District Electoral Officer (DEO). Both found Modi’s appeal to be “inconsistent” with the poll watchdog’s instructions prohibiting the use of armed forces for political gains.

Their opinion, The Indian Express has learnt, was debated vigorously in the Commission meeting Tuesday and was, eventually, over-ruled on the technicality that Modi did not seek votes for either his party or himself while invoking the Balakot air strikes.

According to an EC official, who spoke on the condition of anonymity, the comments of the DEO and the CEO were not considered since their opinion was based on “just five lines of the speech”.

“The decision was made after taking the whole speech into consideration,” the official added.

“The matter has been examined in the context of extant ECI’s advisory dated 04.12.2013, which was reiterated on 09.03.2019 and a sequel issued on 19.03.2019, provisions of the Model Code of Conduct and after examination of complete transcript of speech of eleven pages as per the certified copy sent by the Returning Officer, 40-Osmanabad Parliamentary Constituency on 13.04.2019, Commission is of considered view that in this matter no such violation of the extant advisories/provisions is attracted,” states EC’s reply sent to Congress leader Randeep Singh Surjewala Tuesday.

On March 19, the poll panel had written to all parties asking them to advise their leaders and candidates to “desist” from “indulging in any political propaganda involving activities of the Defence forces”.

With Wednesday’s decision, the EC has cleared two of the five Congress complaints against the Prime Minister. On Tuesday, the Commission had found no violation of the MCC and electoral laws in Modi’s April 1 speech at Wardha where, referring to Congress President Rahul Gandhi’s decision to also contest from Wayanad, he had said that the party was “running away from majority-dominated areas” to “take refuge in areas where the majority is in minority”.

On April 12, the Congress had approached the Commission against the above comment calling it a “blatant and brazen act” and a “direct violation of EC’s instructions dated March 9 and March 19.

The other Congress complaints against the PM relate to his remarks elsewhere: On April 6, in Nanded, Maharashtra, he again referred to the Wayanad seat as one where the “country’s majority is in minority”.

And on April 21, while speaking in Patan in Gujarat, Modi, referring to himself in third person, said he had 12 missiles ready and that had Pakistan not announced the return of Wing Commander Abhinandan then it would have had to face “qatal ki raat”. On the same day, addressing a rally in Barmer in Rajasthan, he warned Pakistan, saying India’s nuclear arsenal is not meant for Diwali. “Every other day they used to say ‘we have nuclear button, we have nuclear button’. What do we have then? Have we kept it for Diwali?” he said.

Chandigarh Ki Aawaz candidate’s affidavit: Will quit if people are unhappy with my performance