At least one Commissioner dissented on Wardha & Latur speeches but all-clear to Barmer address was unanimous. 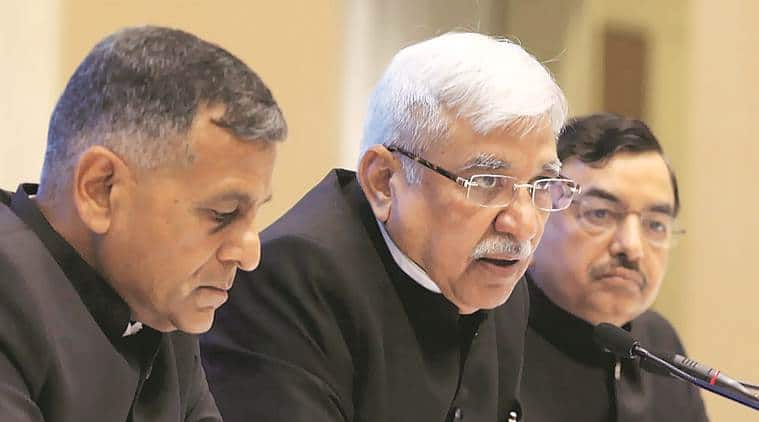 The Election Commission’s (EC) decision to give a clean chit to Prime Minister Narendra Modi for his “minority-majority” speech at Wardha on April 1 and his appeal to first-time voters by invoking the Balakot air strikes in Latur on April 9 was not a unanimous one, The Indian Express has learnt.

In both cases, one Commissioner had dissented and the EC’s final decisions, in favour of the PM, was taken by a majority of 2-1.

But the poll panel was unanimous Thursday disposing a third complaint against Modi, finding no violation of the Model Code of Conduct (MCC) by him in his speech in Barmer in Rajasthan where he had warned Pakistan, saying India’s nuclear arsenal is not meant for Diwali. “Every other day they used to say ‘we have nuclear button, we have nuclear button’. What do we have then? Have we kept it for Diwali?” he had said.

Rarely have decisions been taken by a majority since the enactment of the above law. Among the few examples of differences within the EC is one from 2009 when a divided Commission sent its opinion to the President on whether the then Congress President Sonia Gandhi should be disqualified as an MP for receiving a foreign award.

N Gopalaswami was Chief Election Commissioner at that time and S Y Quraishi and Navin Chawla were his colleagues on the panel. While Gopalaswami held the view that a further inquiry was needed into Gandhi receiving Belgium’s highest civilian award in November 2006, he was overruled by Chawla and Quraishi, who decided that the inquiry was complete and no further action was required.

But differences emerged in the incumbent Commission while addressing Congress’s complaints against Modi for alleged MCC violations during the ongoing Lok Sabha elections.Until Wednesday, two complaints had been decided by EC. The first clean chit came Tuesday when the Commission found no violation of the MCC and electoral laws in Modi’s April 1 speech at Wardha where, referring to Congress President Rahul Gandhi’s decision to also contest from Wayanad, he had said that the party was “running away from majority-dominated areas” to “take refuge in areas where the majority is in minority”.

The poll panel had concluded that the above remark had not violated Sections 123 (3A) and 125 of the Representation of the People Act, which dealt with promotion of “feelings of enmity or hatred between different classes of the citizens of India on grounds of religion, race, caste, community or language” by a candidate.

The Commission’s second clean chit to Modi for his appeal in Latur had gone against the opinion of the Osmanabad District Electoral Officer (DEO) who had found the PM’s speech to be “inconsistent” with the EC’s instructions prohibiting the use of armed forces for political gains.

The Supreme Court, which is hearing Congress MP Sushmita Dev’s petition demanding urgent action on EC’s behalf on alleged MCC violations by Modi and BJP President Amit Shah, has asked the Commission to decide all Congress’s complaints against Shah and Modi before May 6.

The remaining Congress complaints against the PM relate to his remarks elsewhere: On April 6, in Nanded, Maharashtra, he again referred to the Wayanad seat as one where the “country’s majority is in minority”.

And on April 21, while speaking in Patan in Gujarat, Modi, referring to himself in the third person, said he had 12 missiles ready and that had Pakistan not announced the return of Wing Commander Abhinandan then it would have had to face “qatl ki raat”.