Delhi Assembly Elections 2020 Highlights: “If it (protest) had been against one law, it would have ended after assurances of the government. But AAP and Congress are provoking people. Constitution and tricolor are being kept in front and attention is being diverted from the real conspiracy,” PM Modi said.

Delhi Assembly Election 2020 Highlights: Prime Minister Narendra Modi, in his first Delhi election rally, said, India should not be driven by politics of hate. Addressing a gathering at Karkardooma, had the protests been purely against one law (CAA), they would have ended after assurances from the central ministers.

“If it (protest) had been against one law, it would have ended after assurances of the government. But AAP and Congress are provoking people. Constitution and tricolor are being kept in front and attention is being diverted from the real conspiracy,” he said, adding that he cannot leave the state in his “state of anarchy”. Hence he urged the people to press the lotus button to bring a positive change in Delhi.

Kejriwal has no idea that Modi ji is already in the heart of Delhiites: Amit Shah

Amit Shah: Kejriwal feels that if Ayushman Bharat Yojana is implemented, Narendra Modi will become popular in Delhi. Kejriwal has no idea that Modi ji is already in the heart of Delhiites. See the results of the Lok Sabha elections, you will know.

On the anti-CAA protests, PM Modi said, "If it (protest) had been against one law, it would have ended after assurances of the government. But AAP and Congress are provoking people. Constitution and tricolor are being kept in front and attention is being diverted from the real conspiracy

Cannot leave Delhi in the state of anarchy: PM Modi

PM Modi appeals to the people of Delhi to press the lotus button to change Delhi. He said that he cannot leave Delhi in the state of anarchy.

The GST has already reduced tax on about 99% of the needs of the poor and middle class. Earlier, the average GST rate was 14.4%. It is now reduced further to 11.8%. Due to this, the poor-middle class are saving around Rs 2 lakh crore annually: PM Modi

People of country got Lokpal, but people of Delhi are still waiting for Lokpal: PM Modi

PM Modi in his first Delhi election rally says, "People of the country got a Lokpal, but the people of Delhi are still waiting for a Lokpal. There was such a big movement, such tall claims, what happened to them all?

Modi tells Delhi rally that India will not be driven by politics of hate but by policy of development.

Modi tells Delhi rally that India will not be driven by politics of hate but by policy of development.

Delhi govt does not want to give homes to poor: PM Modi

PM Modi: The government here does not want to give homes to the poor, and thus the state government has not implemented the Pradhan Mantri Awas Yojana here. Till the time this government his here, they will keep on obstructing the development works.

Only BJP can take Delhi to heights it deserves, says PM Modi

Only BJP can take Delhi to heights it deserves, says PM Modi in his first rally in Delhi's election season 2020.

Cannot under stand whether craters are on roads, or roads are on craters

Amit Shah: Kejriwal had said that Delhi's roads will be made like Europe. But when I was coming here, I did not know whether there are roads in the pits or pits in the roads. 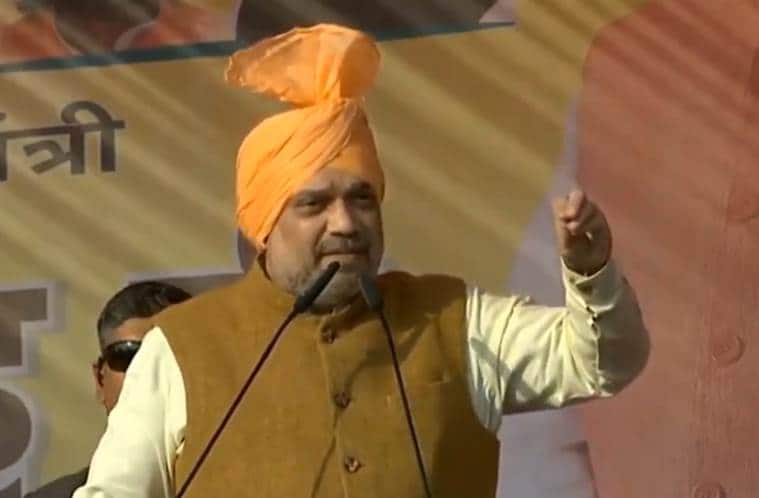 Your vote is to ensure safety of Delhi, country: Amit Shah

Amit Shah in Mundka rally: When you vote on February 8, you do not think that this vote is only to win the BJP candidate. Your vote is also going to ensure the safety of Delhi and the country, it is going to strengthen the hands of Shri Narendra Modi

The AAP is likely to release its election manifesto on Tuesday, party leader Sanjay Singh has said. In the last three days of election campaigning, AAP will intensify its campaign through 500 members of its frontal organisations.
"In the next three days, 15,000 meetings will be held. In the last phase, we would use the slogan 'acche honge paanch saal - Delhi mein toh Kejriwal' (five years will go well - Kejriwal should be there in Delhi)," news agency PTI quoted Singh as saying on Monday.

If Arvind Kejriwal is a terrorist, I challenge BJP to arrest him: AAP's Sanjay Singh

Reacting to Javadekar's statement, AAP MP Sanjay Singh said, "This is happening in the capital of our country where the Central govt is sitting, the Election Commission is present. How can a central minister be permitted to use such language? If Arvind Kejriwal is a terrorist, I challenge BJP to arrest him."

Watch | Plenty of proof that kejriwal is a terrorist, says Prakash Javadekar

BSP contesting on almost all Delhi constituencies on its own strength: Mayawati

Bahujan Samaj Party (BSP) Chief Mayawati in Delhi: Our party is contesting on almost all of the Delhi assembly constituencies on its own strength. We have not done alliance with any other party in this election.

Yogi Adityanath: Why a Pakistani minister is making statements in support of Kejriwal?

Uttar Pradesh CM Yogi Adityanath in Delhi's Vikaspuri: Why a Pakistani minister is making statements in support of Arvind Kejriwal? Because he knows that only Kejriwal can feed biryani to protesters in Shaheen Bagh.

For Outer Delhi residents, a choice between local and national issues

In the four rallies that Home Minister Amit Shah has addressed in Bawana, Badli, Rithala and Najafgarh, protests at Shaheen Bagh and the nation’s security featured prominently in his speeches. It was at the rally in Rithala that MoS Anurag Thakur raised part of the slogan ‘Desh ke gaddaron ko’ , which the audience completed by shouting ‘Goli maaro saalon ko’. He was later removed from the BJP’s list of star campaigners and banned from campaigning for 72 hours. BJP leaders campaigning in the city, such as UP Chief Minister Yogi Adityanath and Union Minister Smriti Irani, have brought up Shaheen Bagh. READ MORE

Hitting out at Arvind Kejriwal for the "bad condition" of roads, BJP National president JP Nadda tweeted: "Kejriwal, the list of your false promises is so long that it does not end. You promised to build roads like Europe in Delhi. But you made the roads of Delhi bad. There are no potholes in the road, there are roads in the pits. The people of Delhi are challenging you to come on these roads."

Delhi High Court dismisses a petition against V Ravi, AAP candidate from Delhi's Karol Bagh seat for allegedly concealing his educational qualification in his nomination papers filed before the EC. The petition was filed by BJP's Y Chandolia, who is also contesting from the seat.

The Delhi High Court on Monday sought responses of the Election Commission (EC) and the Centre on a plea by 11 Independent candidates challenging rejection of their nominations for the upcoming Delhi Assembly polls. A bench of Chief Justice D N Patel and Justice C Hari Shankar issued notices to the Centre and the EC seeking their stand on the candidates' plea, which also challenges a single judge order declining to entertain their petition against rejection of the nominations. The division bench said it will hear the matter on February 5.

For the first time in the polls in the capital, voters aged 80 years and above and those from the PWD category were given the option of postal ballot. As per figures available with the CEO office, around 3,000 voters from both categories opted for this provision. “We had got 3,383 applications from all districts, of which 2,919 have been accepted… The idea was that maximum number of people should vote… This option was only for those who are not able to physically come. So we didn’t expect too large a number,” said CEO Ranbir Singh. Read More 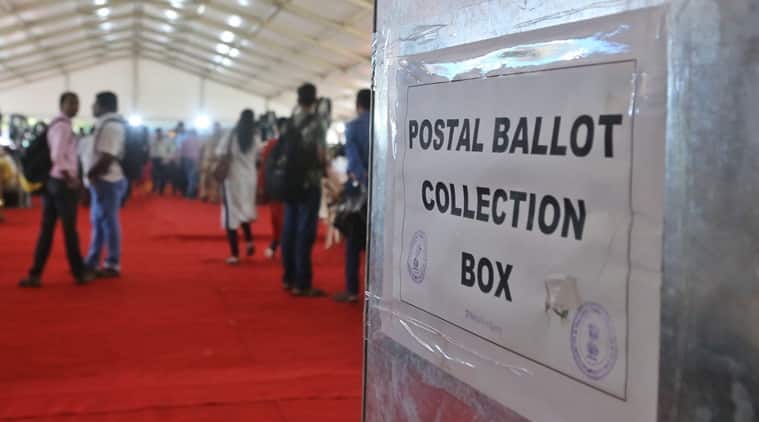 The Citizenship Amendment Act (CAA), which the Congress has been actively opposing, also featured in the manifesto, with the party saying it will move the Supreme Court and challenge its constitutional validity. Congress leader and manifesto committee chairman Ajay Maken said, “The BJP is trying to communalise and polarise the elections. By February 21, we will approach the SC and challenge the constitutional validity of the CAA under Article 131. In Delhi, we will not implement the proposed NRC nor the NPR in this form. The elections should be on issues of Delhi, not anything else.”

Prime Minister Narendra Modi will address two rallies in the capital on Monday and Tuesday, ahead of assembly polls on February 8. The first rally will be held in Shahdara and the second in Dwarka. While senior BJP leaders, including Home Minister Amit Shah, Defence Minister Rajnath Singh and party president J P Nadda, have addressed several rallies in the city so far, this will be the first time that the PM will campaign in the city since polls were announced. Read More

New name of AAP should be Muslim League: Kapil Mishra

BJP Model Town candidate took to Twitter Monday to say, “The new name of the AAP should be Muslim League. Omar Khalid, Afzal Guru, Burhan Wani and those who consider terrorists as their father, are afraid of Yogi Adityanath ji.'

Welcome to our LIVE blog. Prime Minister Narendra Modi is scheduled to hold a rally in Shahdra while Union Home Minister Amit Shah will address mega rallies in Mundka, Greater Kailash, Sadar Bazar and Rajendra Nagar. Follow to get all the latest updates here! 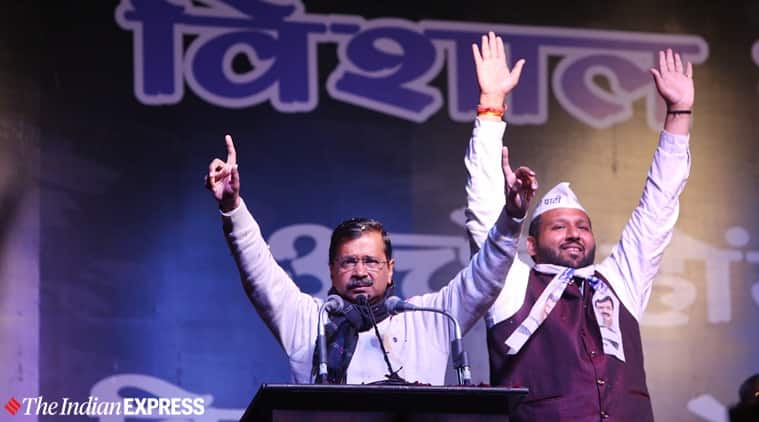 Earlier in the day, BJP candidate from Model Town Kapil Mishra on Monday said the Aam Aadmi Party (AAP) should be renamed as Muslim League. Mishra's comment came after the ruling AAP demanded a ban from campaigning on Yogi Adityanath by the Election Commission.

"The new name of the AAP should be Muslim League. Umar Khalid, Afzal Guru, Burhan Wani and those who consider terrorists as their father, are afraid of Yogi Adityanath ji," Mishra tweeted. Mishra's comment came days after calling Delhi elections a fight between India and Pakistan,

Earlier, Mishra was banned from campaigning for 48 hours by the Election Commission for tweets comparing the upcoming election to an India-Pakistan contest and calling Shaheen Bagh “mini-Pakistan”. Even after the ban, Mishra had said he will not apologize for his remarks.

On the last Sunday before Delhi goes to polls, over 1 lakh BJP leaders participated in door-to-door campaigns across 70 constituencies. According to EC rules, parties will be allowed to campaign till Thursday 5 pm, after which all campaign activities must be halted.

Meanwhile, the Congress Sunday launched its manifesto, in which the party has promised to provide subsidised electricity up to 600 units, with free electricity for those consuming up to 300 units.

Under the AAP-led Delhi’s government power subsidy scheme, those consuming less than 200 units a month get a zero electricity bill. Those using between 201 and 400 units per month get a 50% subsidy.

Also, for the first time in the polls in the capital, voters aged 80 years and above and those from the PWD category were given the option of postal ballot. As per figures available with the CEO office, around 3,000 voters from both categories opted for this provision.