Delhi election exit poll results 2020 LIVE Updates: The Delhi Chief Minister who was irked by the polling authority's delay in releasing the final voter turnout, wrote on Twitter, it was 'shocking' that the body could not come up with the figures even ‘several hours’ after voting concluded.

Delhi election exit poll results 2020 LIVE updates: Addressing the media, the Election Commission Sunday said the total voter turnout in Delhi is 62.59 per cent. Claiming that they took time to collate data, the polling authority said accuracy was their top priority while giving out final figures. The turnout is 2 per cent higher than what was witnessed during Lok Sabha elections, the EC added. The Delhi Chief Election Officer said, “Ballimaran had the highest voter turnout at 71.58 per cent. Delhi cantonment area recorded lowest voter turnout at 45.36 per cent.”

The briefing comes a day after pollsters predicted a comfortable position indicating return to power for the Arvind Kejriwal-led Aam Aadmi Party (AAP) in the national capital. Earlier today, the Delhi Chief Minister was irked by the polling authority’s delay in releasing the final voter turnout, wrote on Twitter, it was ‘shocking’ that the body could not come up with the figures even ‘several hours’ after voting concluded. Lashing out at the EC on Twitter, the Aam Aadmi Party chief said, “Absolutely shocking. What is EC doing? Why are they not releasing poll turnout figures, several hours after polling?”

While, pollsters predicted a 50-plus seat share in the 70-seat Assembly for AAP, the BJP is expected to improve its tally by winning at least 20 seats, while the Congress is likely to draw a blank. In the last two Assembly polls that the AAP contested in 2013 and 2015, the constituencies in the city — Deoli, Ambedkar Nagar, Seemapuri, Sangam Vihar — have shown the way for the party in terms of numbers and also voter percentages.

The Election Commission holds press conference to update the final polling figures. Stay tuned to this space for updates:

Earlier in the day, the ruling Aam Aadmi Party had released two videos alleging tampering of the Electronic Voting Machines. Responding to the allegations, the Election Commission said, "The videos are of unused EVMs. We got data from 13,780 booths and followed due process. Polling agents were shown proof and accuracy is our top priority."

Okhla constituency which includes Shaheen Bagh, the hotbed of the anti-CAA protests in the country where women have been in a sit-in for over 50 days, recorded a voter turnout of 58.8 per cent, informs Election Commission.

The Election Commission briefed the media on the total voter turnout in Delhi which is 62.59 per cent. Claiming that they took time to collate data, the polling authority said the turnout is 2 per cent higher than what was witnessed during Lok Sabha elections. The Delhi CEO said, 'Ballimaran had the highest voter turnout at 71.58 per cent.'

Never has an election campaign in Delhi been as ugly as the one just ended. Never have senior ministers of the government of India spent so much time on what is essentially a municipal election. Never before have we seen so open an attempt to make it an election to divide Hindus and Muslims. Despite the ugliness and venom that defined the BJP’s campaign, early opinion polls indicate that it is unlikely to win Delhi. It deserves to lose. I speak as someone who has spent more than half a lifetime in this city and who cherishes its syncretic culture. Read Tavleen Singh's opinion

‘Absolutely shocking’: Kejriwal lashes out at EC over delay in voter turnout figures

Irked by the Election Commission’s delay in releasing the final voter turnout of the Delhi Assembly polls, Delhi Chief Minister Arvind Kejriwal Sunday said it was ‘shocking’ that the body could not come up with the figures even ‘several hours’ after voting concluded. Lashing out at the EC on Twitter, the Aam Aadmi Party chief said, “Absolutely shocking. What is EC doing? Why are they not releasing poll turnout figures, several hours after polling?” Read full story

Absolutely shocking. What is EC doing? Why are they not releasing poll turnout figures, several hours after polling? https://t.co/ko1m5YqlSx

Congress going to do much better: Subhash Chopra

"All exit polls are going to fail. BJP will not get even 20 seats and Kejriwal is not going to form govt in Delhi," state chief Subhash Chopra told news agency ANI. "I'm hoping Congress is going to do much better than what exit polls are showing. Let us wait till results are out," he added.

As #ExitPoll and #DelhiAssemblyPolls dominated social media trends, memes around the fate of Congress flooded the virtual world. Many quipped that the party wouldl find solace as the result cannot get worse than last time. Click here to read more. 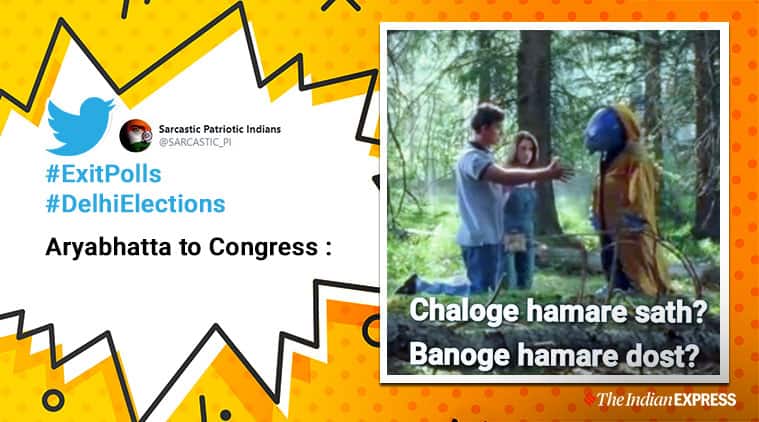 'The exit poll has two meanings. One, it is exit poll for Delhi elections and the other is that it is an exit poll for Manoj Tiwari. He will soon get an exit as Delhi BJP Chief and he knows this very well,' Aam Aadmi party leader Saurabh Bhardwaj was quoted as saying by news agency ANI.

Senior AAP leader and Deputy Chief Minister Manish Sisodia on Saturday said the party is winning the Delhi assembly elections by a huge margin after exit polls forecast a comfortable victory for the ruling party. He congratulated all the AAP workers for their hard work, saying the election is a "proof" of "our strong and selfless relationship".

Here's what pollsters predict for the Congress party in Delhi

Here are its result:

All these exit polls will fail: Manoj Tiwari

Delhi BJP chief Manoj Tiwari Satuday said that all these exit polls "will fail" and that the BJP will emerge victorious.

The BJP, which won only three seats in the 2015 elections, is poised to increase its tally and bag anywhere between 10-26 seats, pollsters predict.

What pollsters predict for AAP

Delhi elections exit poll results: With elections to the 70-member Delhi Assembly coming to an end, exit poll results have predicted a return to power for the Arvind Kejriwal-led Aam Aadmi Party (AAP). Here's what pollsters are saying:

The Arvind Kejriwal-led Aam Aadmi Party is set to return for a second term in the national capital, with pollsters predicting a 50-plus seats in the 70-member assembly. In the 2015 elections, AAP won a record 67 seats, bagging 54 per cent of the vote share. The Kejriwal-led Aam Aadmi Party will win 54 seats, TV9 Bharatvarsha-Cicero predicted, adding the BJP will win 15 seats. The majority mark in Delhi is 36.

Here are the results:

As per the exit poll conducted by Republic TV, the Kejriwal-led Aam Aadmi Party is getting 48-61 seat. The poll predicts 9-21 seats for the BJP.

The national capital, which went to polls after a hectic and high-octane campaign, witnessed over 50 per cent voter turnout till 5.30 pm. (Express photo: Tashi Tobgyal)

At least 40,000 personnel, 19,000 home guards, and 190 companies of paramilitary forces were deployed across the national capital to ensure safe poling. Special security arrangements were made at the anti-Citizenship Amendment Act (CAA) protest sites like Shaheen Bagh with the help of volunteers.

The winning formula for the elections seems to be the tried and tested issues of ‘bijli, sadak, paani‘ as promises like free electricity and clean water have found resonance in the manifestos of all the three major parties — BJP, Congress, and the Aam Aadmi Party.

The Kejriwal-led AAP is hoping its stellar performance of the last assembly polls when it won 67 of the 70 seats. The BJP, which bagged all the seven seats in Delhi in the 2019 Lok Sabha poll, is aiming to dislodge the AAP, while the Congress is seeking to better its performance than last time when it drew a blank in the assembly polls.