Delhi Assembly Elections 2020 HIGHLIGHTS: The Election Commission asked Yogi Adityanath to submit his reply before 5 pm on February 7 . Failing which, the Commission said, a decision will be taken "without any further reference to you."

The EC said Adityanath’s statement, prima facie, has violated the provisions of the Model Code of Conduct (MCC).

It asked Adityanath to submit his reply before 5 pm on February 7 . Failing which, the Commission said, a decision will be taken “without any further reference to you.”

While addressing a campaign in New Delhi last week, Adityanath said: “Kejriwal can’t provide clean drinking water to people of Delhi. A survey says that Delhi has the most polluted drinking water. But Kejriwal government provides biryani to the people sitting at protest in Shaheen Bagh and other places.”

Home Minister Amit Shah during his roadshows in Delhi, alleged the anti-CAA protest at Shaheen Bagh was a "joint venture" of the AAP and the Congress and claimed the "tukde-tukde gang" would get a "shock" when the election results are declared.

"Shaheen Bagh is the joint venture of the Aam Aadmi Party and the Congress. Kejriwal and Rahul Gandhi are worried that Shaheen Bagh should not be discussed. I want to ask them why the security of the country should not be an electoral issue? Why are the people sitting in Shaheen Bagh demanding 'Jinnah Wali Azadi' and why the tukde-tukde gang is supporting them?

"Shame on these people. I want to tell all of you that tukde-tukde gang is going to get a shock, because you are going to press the button on the lotus symbol on February 8 for the development of Delhi and the country," he said at a roadshow in Seemapuri constituency in North East Delhi.

Close to the Delhi elections, Congress said it may spring a surprise similar to the elections in neighbouring Haryana last year, senior party leader Randeep Singh Surjewala claimed as campaigning.

"Some news channels were giving us just two seats in Haryana but we won 31. It is going to happen again," he told a press conference.  (PTI)

My vote bank not religion or caste-based, but people who want good edu, medical facilities: Kejriwal

In an interview to PTI, Delhi CM Arvind Kejriwal said his vote bank is not based on religion or caste, but are all those people who want good education, medical treatment, modern roads and 24-hour electricity.

"Earlier, it used to be said that votes are not cast based on work done by the government. If you want to get votes you need to establish your vote bank based on caste and religion," he said.

He said these elections will establish a new kind of politics in the country which is the politics based on work.

Delhi's Deputy CM Manish Sisodia holds a roadshow in Padpadganj, ahead of the legislative assembly elections. 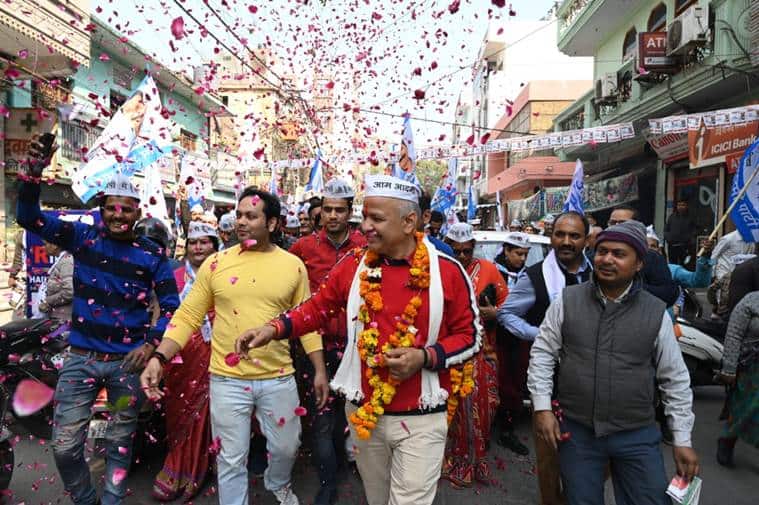 The Election Commission has issued a notice to AAP leader Sanjay Singh for accusing BJP of causing "major trouble".  His comments came days after a man was arrested for firing shots near the Shaheen Bagh protest area last week, PTI reported.

“Amit Shah is the Home Minister of the country at this time, now just before elections, photos and conspiracies will be found. 3-4 days are left for the elections, BJP will do as much dirty politics as they can. What does having a picture with someone means?” he had told ANI.

Delhi Assembly Elections LIVE: 'Had dared Amit Shah for an open debate, he ran away'

Addressing the media in the national capital, Delhi Chief Minister Arvind Kejriwal said, “In the Bhagvad Gita, it is written that a true Hindu is brave and never leaves the battle field. I had challenged Amit Shah for an open debate but he ran away from the battle field.” “Campaigning is about to end but BJP is yet to declare their poll candidate. This proves that there is no one worth becoming the chief minister of Delhi from the party," the AAP supremo said.

The Delhi High Court on Thursday sought the Election Commission's response on a plea seeking rejection of nomination of an AAP candidate for allegedly concealing his educational qualification in his affidavit for the February 8 Assembly polls, PTI reported. A bench of Chief Justice D N Patel and Justice C Hari Shankar issued a notice to the EC and the AAP candidate from Karol Bagh, Vishesh Ravi, seeking their stand on the plea by Yoginder Chandolia, the BJP hopeful from the area. The bench listed the matter for hearing on Friday.

The Delhi High Court today declined to entertain a plea by 11 Independent candidates against rejection of their nominations for the February 8 Assembly polls, PTI reported. A bench of Chief Justice D N Patel and Justice C Hari Shankar declined to entertain the candidates' plea, which had also sought to set aside a single judge order dismissing their petition against the rejection of their nominations. The returning officer (RO) had rejected their nominations on January 21, the last date for filing the same. The plea challenging the rejection was dismissed on January 28 by a single judge of the high court who had said that only an election petition was maintainable after the poll process has started. The petitioner candidates had contended that the single judge's order "was passed erroneously and disregarding the facts and material placed on record" by them.

Delhi legislator and BSP candidate Narayan Dutt Sharma, who was earlier with the AAP, was allegedly attacked with batons by three unidentified people in the early hours of Thursday, police said. Sharma, who is the legislator from Badarpur and is seeking re-election to the Delhi assembly as a Bahujan Samaj Party candidate, received minor injuries. "The attack on Narayan Dutt Sharma is condemnable and shameful," BSP chief Mayawati said on Twitter. The incident took place around 1 am when he was returning to his home in Badarpur after a party meeting. Three men stopped his car and beat him up, a senior police official said. The three accused are yet to be caught, he added.

It is expected that a "Ram Rajya" (welfare state) will be realised in a true sense in the country by then, the Shiv Sena added in its editorial. There is criticism that the BJP "brought in" Lord Ram as Aam Aadmi Party leader Arvind Kejriwal has caused restlessness in the saffron party ahead of the Delhi Assembly polls, the Marathi daily said. "This (criticism) is because the prime minister announced formation of the temple trust four days ahead of polling. It is important that the prime minister made the announcement in the Lok Sabha," it said.

A day after the Centre announced formation of a trust to build a Ram temple in Ayodhya, the Shiv Sena lashed out at the BJP, saying the issue was not expected to be politicised, but its "foundation" has been laid ahead of the upcoming Delhi Assembly polls. "Modi gave the slogan of 'Jai Shri Ram' just four days ahead of polling for the Delhi Assembly. Will be happy if (the number) goes up by two-four seats with the help of Shri Ram," an editorial in Sena mouthpiece 'Saamana' on Thursday said sarcastically. "It was expected that the issue of Ram temple will not be politicised, but its 'foundation' was laid for the Delhi Assembly (election) and will be completed on the occasion of 2024 Lok Sabha (polls)," it said in cryptic remarks.

Delhi Assembly Elections LIVE: BJP still strong in two of its three Delhi seats, but Mustafabad might have other plans

As the AAP juggernaut bulldozed the 2015 Delhi Assembly elections with an unprecedented mandate, BJP was able to salvage only three out of 70 seats — Rohini, Vishwas Nagar, and Mustafabad. The party has repeated its sitting MLAs from all the three constituencies hoping that these seats will become the base for more this time around. But will it be that easy to hold on to all three seats, a look at the ground reality this time around reveals that even though BJP enjoys considerable support in Rohini and Vishwas Nagar, the Muslim-majority seat of Mustafabad may slip from its grasp owing to the Citizenship Act and lack of development.

Speaking on the ongoing protests against the contentious Citizenship (Amendment) Act, AIMIM chief Asaduddin Owaisi told new agency ANI that Shaheen Bagh might turn into Jallianwala Bagh after February 8. “Might be they will shoot them, they might turn Shaheen Bagh into Jallianwala Bagh. This might happen. A BJP minister gave a statement to ‘shoot a bullet’. The government must give an answer as to who is radicalising.”

If the BJP’s aggressive, high decibel campaign for the February 8 Delhi polls, with its obsession with Shaheen Bagh, was aimed at harnessing people’s frustration at traffic jams created by the protest, it worked. But if it was meant to consolidate votes in favour of the party candidates, the election pitch — which seeks to pit Prime Minister Narendra Modi against Chief Minister Arvind Kejriwal — might not yield the desired results. Modi’s popularity and acceptance in the city are intact, despite the malaise in the economy and criticism over the Centre’s failure to tackle joblessness. Voters laud the Prime Minister for “bold steps” he has taken — from Article 370 to Ram Mandir — but are quick to add that local issues are a bigger concern than national ones when it comes to choosing a government for the state.

“Kejriwal Mera Hero, Mera Bijli Ka Bill Zero” — Rajaul Haq (31) wore his heart on the back of his autorickshaw till January 15. The declaration is now buried under a thick coat of yellow paint. “They have erased the words, but they are etched in my heart,” said Haq, dusting off his autorickshaw as part of his morning ritual at Khadda Colony in South Delhi’s Badarpur. The fan of Chief Minister Arvind Kejriwal is among several auto drivers in Delhi who have been penalised Rs 300-Rs 20,000 for displaying “political advertisements” on their vehicles, after the Model Code of Conduct came into force on January 6. Haq was fined Rs 20,000 at Jasola village — Rs 10,000 each on the owner and driver. Unfortunately for him, he is both, just not on paper. But his plea to traffic police that the vehicle is registered in someone else’s name but he is the actual owner did not cut much ice. “I recently bought the auto from Vikas bhai. How can I be charged twice?” said Haq, who moved High Court over the challan.

Delhi Chief Minister Arvind Kejriwal on Wednesday spoke to The Indian Express on a wide range of issues.

Responding to the Delhi Police claim that Kapil Baisala, who fired two shots in the air at Shaheen Bagh last week, had joined the AAP last year, Kejriwal said: “Send him to jail. If the jail term is two years, sentence him for four years if he is connected with the AAP by chance. Forty-eight hours before voting, his photos coming out are an obvious conspiracy. Nothing worked for Amit Shah ji. He first got all parties against me — LJP, JD(U), RJD, but that didn’t work. Then he brought in 200 MPs but that failed, he got 70 ministers but that failed, he got 11 chief ministers, which also failed. Then he abused me thoroughly, but that didn’t work either. Then he started saying Shaheen Bagh, Shaheen Bagh, Shaheen Bagh, which failed again. Finally, Delhi Police is the last resort. They are going around with some photos, but his (Kapil’s) father has said that he isn’t a part of AAP.”