Delhi Assembly Election 2020 LIVE Updates: Accusing Delhi Chief Minister of shielding the ‘tukde tukde gang’, Union Home Minister Amit Shah Monday asked does the Delhi CM support those who talk of ‘dividing the country’. Addressing a poll rally at Rithala area in Delhi, Shah said Kejriwal immediately tweets whenever he talks about issues pertaining to water, electricity, and CCTVs, but would he tell the people of Delhi if he is in favour of sending ‘tukde tukde gang’ to jail. “Kejriwal ji are you in favor of action against Sharjeel Imam or not? Are you in favor of those at Shaheen Bagh or not? Make it clear to the people of Delhi,” he asked.

Earlier in the day, Kejriwal alleged that the BJP does not want to open the Shaheen Bagh stretch of the Kalindi Kunj road where anti-CAA protests are going on for over a month as the saffron party is doing “dirty politics” over it. He said law and order in the national capital entirely lies with the Centre and “if they are saying that they need permission from me, I am giving them permission, open the road in one hour”. On Amit Shah’s promised to make Delhi a ‘world-class city’, Kejriwal said he hopes the home minister does not backtrack on his words once the elections are over.

The Congress demanded on Monday that the Election Commission (EC) take action against Union minister Anurag Thakur for allegedly instigating the crowd at a poll rally here by raising indecent slogans.

"As the economy is going downhill, unemployment is at record levels and the Modi government does not have anything to showcase, the BJP is back to its favourite game of polarisation," she added.

Triggering a row, Thakur egged on the participants in the election rally to raise an incendiary slogan that says "traitors should be shot at", after he lashed out at anti-CAA protesters.

JP Nadda at Moti Nagar: "Did the Delhi government build a single flyover in the last 5 years? Did they bring 5,000 new DTC buses and installed 15 lakh CCTV cameras? Did they give you free wi-fi?"

"Kejriwal govt did not do anything to reduce pollution in the city except for implementing odd-even scheme which only caused trouble to the people."

JP Nadda: Delhi has the most polluted and poisonous water among 21 cities.

Delhi CM Arvind Kejriwal Monday asked Home Minister Amit Shah why is not arresting Sharjeel Imam, the Jamia student who spoke of separating Assam from the country, and playing dirty politics on the issue instead. Taking to Twitter, Kejriwal said, "Sharjeel spoke of separating Assam from the country. It is very serious. You are the home minister of the country. This statement of yours is bad politics. Your duty is that you arrest him immediately. It has been two days since he said this. Why are you not arresting him? What is your helplessness? Or do you want to do more dirty politics now?

Earlier today, Shah had dared Kejriwal to speak on whether he agreed on the sedition case filed against Sharjeel.

Three sedition cases have been filed against Sharjeel for his anti-CAA videos, where he can be heard calling for stepping up the protests in Assam through road blocks to force the Centre to listen.

A video purportedly showing Union Minister Anurag Thakur leading the crowd at a BJP rally in New Delhi to chant “shoot the traitors” has surfaced on social media Monday. The video, reportedly shot at an election rally in the national capital, shows the Minister of State for Finance egging the crowd to chant ‘Desh ke gaddaro ko, goli maaro saalo ko (shoot the traitors of the nation)’ — a slogan frequently used against anti-CAA protesters. Watch the video here

Amit Shah at Rithala: "You (the AAP leaders) people say that you are with Shaheen Bagh. If you have the guts then go and sit with them. And let Delhi decide."

‘Are you in favour of Sharjeel Imam or not’, Amit Shah asks Kejriwal

Amit Shah at Rithala: "You must have watched the video of Sharjeel Imam, where he talked about dividing the country by "cutting-off North-East from India" and infusing 30 per cent of a particular community in the state. Modi government told Delhi police and they have registered a sedition case against him. I want to ask Kejriwal whether he was in favour of this or not."

Delhi CM Arvind Kejriwal at a roadshow in Bawana and Narela: "Press the broom button so hard that we will break the record of 2015."

Delhi Chief Minister Arvind Kejriwal replies to Home Minister Amit Shah's remark that people can come and pull his ears if he does not make Delhi a world-class city.

"It is offering platform to 'tukde tukde gang' elements under the garb of opposition to the Citizenship (Amendment) Act. This protest is not just a protest against CAA it is a protest against Modi," PTI quoted Prasad as saying.

"Lakhs of people are distressed because they can not go to office, shops are shut and their children are not able to go to school due to roadblock by Shaheen Bagh protesters," he added.

Delhi Chief Minister Arvind Kejriwal on Monday alleged that the BJP does not want to open the Shaheen Bagh stretch of the Kalindi Kunj road where anti-CAA protests are going on for over a month as the saffron party is doing "dirty politics" over it. He said law and order in the national capital entirely lies with the Centre and "if they are saying that they need permission from me, I am giving them permission, open the road in one hour".

"I can give you this in writing, BJP does not want to open the route in Shaheen Bagh. The Shaheen Bagh route will remain closed till February 8 (election day) and it will open February 9," Kejriwal told PTI.

As Delhi goes to polls on February 8, it is expected that one in every 10 voters will keep in mind the air crisis faced by the city every year, as per a recent survey by the Centre for the Study of Developing Societies (CSDS). Nearly half of over 2,000 people surveyed by the CSDS said pollution was a big problem in the city. All major political parties have spoken about the need to tackle this crisis, but a close eye would be kept on their manifestos, expected to be released this week, to see if the issue finds a mention. The ruling Aam Aadmi Party has issued a 10-point guarantee card, which promises to reduce air pollution three times the present levels, planting 2 crore trees, and improving public transportation by bringing in more than 11,000 buses and increasing the metro network. Read more here

“Whosoever gets my shops de-sealed will earn my vote. This Assembly election, I will press NOTA because all parties have made only promises.” This proclamation by Vinod Grover, who ran four shops in Amar Colony, finds an echo at several places where sealing has taken place over the past few years. With Delhi set to vote on February 8, traders who have borne the brunt of sealing drives are a divided lot. While some said they are “disenchanted” with the BJP-led Centre and municipal corporations and will look for alternatives, a few asserted that they will continue to back the party “for the nation” and a “triple-engine government”. The trader community in the capital has traditionally backed BJP.

Vote for us to rid Delhi of Shaheen Bagh: Amit Shah

Home Minister Amit Shah Saturday said there should be “no Shaheen Bagh” in Delhi and appealed to people to choose the lotus symbol on voting day, so that protesters have to leave the place by the evening of February 11, when results are declared.  Since December 15, Shaheen Bagh has been the centre of protests, led by women, against the Citizenship Amendment Act and the proposed National Register of Citizens. While the Congress has backed the protest, the AAP has stayed away from the site, though Deputy Chief Minister Manish Sisodia has said he stands with the protesters. The BJP has been critical of the protesters, with several leaders calling for their removal. Read more here

Earlier today, Kejriwal claimed that crime rate has reduced in areas where CCTV cameras have been installed.

Delhi Chief Minister Arvind Kejriwal on Monday claimed that crime rate has reduced in areas where CCTV cameras have been installed. In a video message addressed to the 'daughters of Delhi', he listed out various steps taken by the Aam Aadmi Party government to ensure safety and security of women in the national capital. The steps listed by him included installation of over two lakh CCTV cameras, free bus travel for women and deployment of bus marshalls among others. (PTI)

Tiwari was addressing people at Jamrudpur in the Greater Kailash constituency during a ‘Twitter Chaupal’.

“Till some years ago, pollution in Beijing was very high, children were forced to use masks. Then they installed smog towers and things improved there. These smog towers are very effective and they cost around Rs 2.5 crore each. Sixty smog towers are enough to clean Delhi. In the first year, we will reduce pollution by 70%. We can clean the city using a small amount, less than what Kejriwal spent on advertisements,” said Tiwari after a Twitter user asked about the party’s plans to curb pollution in the city. Read more here 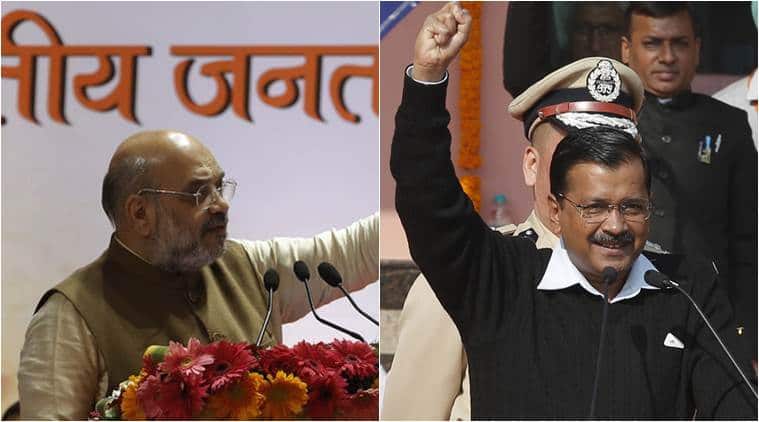 Blaming the CM for “spreading lies”, Shah Sunday alleged that none of the poll promises made by the AAP government have been fulfilled in the last five years. He also took a dig at the government for not installing enough CCTVs across the capital.

Shah’s speech on Sunday started with Shaheen Bagh — the site of an anti-CAA protest led by women that has been raging for over a month —and ended with the same. At another event on Saturday, Shah had said there should be “no Shaheen Bagh” in Delhi. “Button Babarpur se dabna chahiye lekin uska current Shaheen Bagh tak jaana chahiye,” he said.

Taking on Home Minister Amit Shah, who has held 17 rallies and roadshows in 45 days in Delhi as part of BJP’s Assembly poll campaign, Delhi Chief Minister Arvind Kejriwal Sunday said it was not right to insult people of the capital on a daily basis.