Delhi Assembly polls 2020: The Election Commission Friday slapped a notice on Kapil Mishra asking why no action should be taken against him.

Delhi Assembly polls 2020: Attacked for giving “freebies” ahead of Delhi Assembly election 2020, Delhi Chief Minister Arvind Kejriwal Friday said in “limited dose they are good for the economy as they make more money available to the poor and boosts demand”.

“However, it should be done in such limits so that no extra taxes have to be imposed and it does not lead to budget deficits,” Kejriwal added. Opposition parties have been attacking the AAP-led Delhi government for announcing schemes like free bus rides for women and 200 units of free electricity, ahead of the polls.

Meanwhile, the Election Commission has slapped a notice on BJP’s Model Town candidate for calling Delhi elections a contest between India and Pakistan. Mishra, however, defended his statement saying he “spoke the truth”. “I don’t think I said anything wrong. Speaking truth is not a crime in this country. I spoke the truth. I stand by my statement,” ANI quoted Mishra as saying.

Delhi will vote for a new Assembly on February 8, and the counting of votes will take place on February 11.

AAP says something, does something else: Nadda at Nukkad Sabha

BJP national president J P Nadda on Friday slammed the AAP, alleging the Arvind Kejriwal-led government failed to construct more schools and hospitals and install CCTV cameras in the city as it had promised.  Nadda, who was on January 20 elevated from 'working president' of the BJP to its national president, was addressing a Nukkad Sabha in Pandav Nagar in the Lakshmi Nagar constituency.

"The AAP had promised adding 500 more schools, 30 new hospitals, 5,000 buses, lakhs of CCTV cameras, promised free WiFi at public places, Lokpal. But did they do it? They have not and that is their past," Nadda said, cautioning voters to beware of the AAP's poll promises.

Citing the anti-CAA protests at Shaheen Bagh, Union Minister Prakash Javadekar on Friday said the people of Delhi need to decide whether they want "Jinnah Wali Azaadi" or Bharat Mata Ki Jai. Javadekar also accused the Aam Aadmi Party and the Congress of "poisoning" the minds of minorities.

Ahead of the February 8 polls for 70 Assembly seats in Delhi, the BJP leadership has sharpened attack on the ruling AAP and Congress over Citizenship Amendment Act (CAA), and continuing protest against it at Shaheen Bagh here for more than a month.  "We have seen 'Jinnah Wali Azadi" slogan being raised there. Now, Delhi people need to decide if they want 'Jinnah Wali Azadi' or 'Bharat Mata ki Jai'," Javadekar said in a press conference. (PTI)

Addressing a rally in Rohini, Kejriwal said: "BJP is spreading rumours that the free 200 unit electricity scheme will be stopped from march 31. This is a lie. We will continue this scheme when we come back to power."

Addressing a rally in Rohini, Delhi chief minister Arvind Kejriwal said: "They ask why we are providing everything for free. They ask where is this money coming from. Recently, the CM of Gujarat bought a private plane for himself for Rs 140 crore. We have made the public rides free for women with an equivalent amount."

Days after quitting the AAP over being denied ticket for Delhi Assembly elections, incumbent Hari Nagar legislator Jagdeep Singh said on Friday that he has withdrawn his resignation on the advice of party national convener and Delhi Chief Minister Arvind Kejriwal.

Battle for Delhi: A test for three parties with barely any promise in common

Bijli-paani or CAA, small improvements or big-ticket announcements — the upcoming polls will be a test for three parties with barely any promise in common. What is common, though, is a realisation that mega rallies need to give way for a more personal, door-to-door outreach. The Indian Express reports on the AAP, BJP and Congress campaigns

Taking a shot at Delhi's Deputy CM Manish Sisodia for supporting protesters voicing against the Citizenship (Amendment) Act at Shaheen Bagh, Mishra said, "Who's creating a divide between Hindus and Muslim: Sisodia, who stood by anti-CAA protesters at Shaheen Bagh; or Priyanka Gandhi who stood by anti-CAA protesters who burnt trains at Turkman gate; or Kejriwal, who is distributing Rs 5 lakh to protesters. People who gave ticket to Amantullah Khan and Shoaib Iqlab."

The Election Commission of India (ECI) has asked social media platform Twitter to remove BJP’s Model Town candidate Kapil Mishra's tweet which termed Delhi elections a contest between India and Pakistan. Following the directions of Delhi Chief Electoral Officer's office, the ECI asked Twiiter to take the necessary step. The Returning Officer , earlier today, had issued a notice to Mishra in connection with the tweet and asked him to reply by 12.30 pm. Moments after the ECI had issued a showcause notice, the BJP candidate said, “I don’t think I said anything wrong. Speaking truth is not a crime in this country. I spoke the truth. I stand by my statement."

The Election Commission has sent a showcause notice to BJP’s Model Town candidate Kapil Mishra over his remark that the Delhi polls will be a contest between India and Pakistan – a reference to those who oppose the contentious Citizenship (Amendment) Act.

In a series of tweets on Thursday, Mishra said, “Pakistan has made its entry in Shaheen Bagh. Many mini Pakistans are being formed in Delhi. Indian law is not being followed in Shaheen Bagh, Chandbagh, Indralok. Pakistani rioters have taken over Delhi’s roads.” READ MORE

For latest updates on Delhi Assembly polls, follow this space. 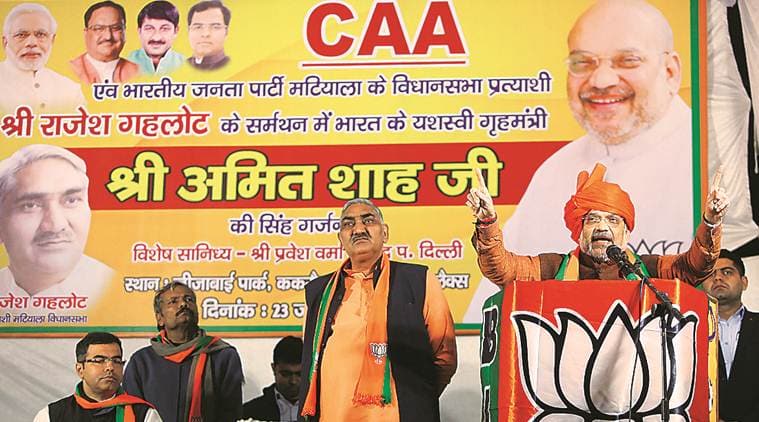 Home Minister Amit Shah took a shot at Arvind Kejriwal and said he became CM with the aid of Anna Hazare.

“I’ve come to remind Kejriwal ji that you forgot the promises you made but neither the people of Delhi nor workers of BJP have forgotten…You became CM with help of Anna Hazare but couldn’t bring a law for Lokpal and when Modi ji brought it you didn’t implement it here,” he said.