Delhi Assembly election 2020 LIVE updates: AAP's Rajinder Nagar candidate Raghav Chadha said that the Citizenship (Amendment) Act and the NRC would not have resonance in the upcoming polls as they are national issues.

Ahead of the Assembly elections in Delhi, Union Home Minister Amit Shah on Thursday called Delhi Chief Minister Arvind Kejriwal a master of making false promises. Addressing a gathering in the Matiala area, Shah said, “if competition to make false promises is held in the country, then Kejriwal will definitely come first.”

He also blamed the Kejriwal government for the non-implementation of the Lokpal bill.   “I’ve come to remind Kejriwal ji that you forgot the promises you made but neither the people of Delhi nor workers of BJP have forgotten…You became CM with help of Anna Hazare but couldn’t bring a law for Lokpal and when Modi ji brought it you didn’t implement it here,” he said.

Earlier today, BJP leader Kapil Mishra dubbed the polls as a contest between India and Pakistan. In a tweet, the BJP’s Model Town candidate wrote, “It will be India vs Pakistan on the roads of Delhi on February 8.” In another tweet, he also said that Pakistan has made an entry in Shaheen Bagh.

Delhi Chief Minister Arvind Kejriwal, meanwhile, took out a roadshow in northwest Delhi’s Matiala Assembly constituency on Thursday. Surrounded by supporters, Kejriwal, atop an open yellow coloured jeep, waved to the public as the roadshow progressed. He was accompanied by Matiala MLA Gulab Singh Yadav.

From 'shiksha wali chai' to 'swasthya wali chai' and 'vikas wali chai', varieties of tea named after the different achievements of the AAP-led Delhi government will now be served at tea stalls that will be set up in all assembly constituencies under the 'kaam ki chai' campaign launched by the party on Thursday. In an apparent dig at Prime Minister Narendra Modi's 'chai pe charcha' campaign, an MBA-dropout from Ahmedabad who goes by the name 'MBA Chaiwala' Praful Billor will supply tea under the AAP's new program. From the ongoing roadshow in Uttam Nagar, New Delhi

From the ongoing roadshow in Uttam Nagar, New Delhi

Shah on Rahul Gandhi's bloodshed remark on abrogation of Article 370: 'This is Modi govt, not a single bullet was fired, J&K have completely part of India'

Shah also took a dig at the Congress government and said Rahul Gandhi was ready to object abrogation of Article 370. " Rahul baba and company was ready, they had immediately objected & said that don't abrogate Article 370, there will be bloodshed. This is Modi govt, not a single bullet was fired and now Jammu and Kashmir have completely become a part of India," he said.

Shah reminded Kejriwal that he became the Chief Minister with the help of Anna Hazare and that he will win a competition of making false promises. "If competition to make false promises is held in the country, then Kejriwal will definitely come first," he said. 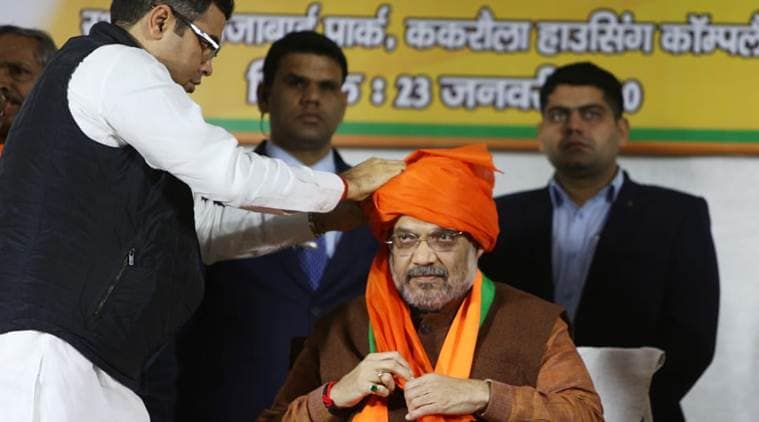 Addressing a gathering in Delhi, Union Home Minister Amit Shah on Thursday said that Kejriwal failed to bring a law for Lokpal in Delhi. " I've come to remind Kejriwal ji that you forgot the promises you made but neither the people of Delhi nor workers of BJP have forgotten...You became CM with help of Anna Hazare but couldn't bring a law for Lokpal and when Modi ji brought it you didn't implement it here,' he said.

The AAP and its chief Arvind Kejriwal mocking 'Rinkiya Ke Papa' song are "insulting" Purvanchalis and their culture, Delhi BJP president Manoj Tiwari said. The Purvanchalis, natives of Eastern UP and parts of Bihar living in Delhi, are not going to be swayed by Kejriwal government's water and power freebies and 98 per cent of them are supporting the BJP, Tiwari said in an interview to the PTI.

Former Punjab Cabinet Minister Navjot Singh Sidhu has been named a star campaigner by the Congress for Delhi Assembly election, campaign for which is on full swing. He is among three leaders named from Punjab. The other two are Chief Minister Amarinder Singh and Fatehgarh Sahib MLA Kuljit Singh Nagra.

It remains to be seen whether Sidhu, who has been missing in action, takes over the responsibility given by the party especially in the light of the fact that Punjab’s AAP leaders have been inviting him to join the party.

BJP candidate from Model Town Kapil Mishra on Thursday termed Delhi Assembly elections as a contest between “India vs Pakistan”. In an apparent reference to Aam Aadmi Party (AAP), Mishra tweeted, “There will be contest between India and Pakistan on the streets of Delhi on February 8.” Last year in August, Mishra lost his Assembly membership and was disqualified as AAP MLA from Karawal Nagar for having campaigned for the BJP and Prime Minister Narendra Modi prior the 2019 Lok Sabha polls.

Delhi CM Arvind Kejriwal, accompanied by Matiala MLA Gulab Singh Yadav, is holding a roadshow in northwest Matiala Assembly constituency. Atop an open yellow coloured jeep, Kejriwal shook hands with the people as his roadshow moved through the narrow lanes of the Matiala Assembly.

Holding placards in support of various schemes of the government, including free healthcare, and electricity, AAP supporters  danced to the tune of  'Lage Raho Kejriwal' (the party's anthem).

Who is Kapil Mishra

Last year in August, Mishra lost his Assembly membership and was disqualified as AAP MLA from Karawal Nagar for having campaigned for the BJP and Prime Minister Narendra Modi prior the 2019 Lok Sabha polls.

Mishra had a fallout with AAP’s top leadership after he was dropped from the Delhi Cabinet in May 2017 for alleged non-performance. Mishra is the first MLA to be disqualified since the Delhi Legislative Assembly came into being in 1993.

After his disqualification, Mishra had said he was ready to “sacrifice” the post of an MLA, “not just once, but a hundred times” to campaign for Modi. “In Assembly polls, I will run a campaign for all 70 seats to Modi. The way this case has been heard is a mockery of Assembly proceedings. I will move court against this illegal order,” he said.

Welcome to The Indian Express' live blog on Delhi Assembly elections. All parties are out on the streets, campaigning ahead of the voting day on Fenruary 8. Follow the latest developments here

For latest updates on the upcming Delhi Assembly polls, follow this space. Arvind Kejriwal during roadshow on Wednesday

In his first roadshow after filing his nomination for the February 8 polls, AAP president and Delhi Chief Minister on Wednesday stuck to the party’s main poll plank — improvements in the city’s education, healthcare, and power and water supply.

Appealing to people that Delhi’s growth should not be halted, Kejriwal on Wednesday asked North Delhi’s Badli constituency to vote for schools, hospitals, and electricity in the upcoming Assembly elections, and not for any political party. “I have a special appeal to everyone who voted for the BJP, Congress and other parties in the Lok Sabha elections. We don’t have any problem if you’re with some other party, but vote for AAP this time.”

He added, “Kejriwal apne liye vote nahi maang raha, Dilli ke liye, Dilliwalo ke liye vote maang raha hai (I am not asking for votes for myself, but for Delhi and its people)… This time, all 2 crore votes should be for schools, hospitals and for Delhi, not for any party.”

Seated in a yellow jeep and surrounded by workers, Kejriwal’s roadshow for AAP’s sitting MLA and Badli contender Ajesh Yadav began from the narrow lanes of Bhalswa Dairy. As the convoy of jeeps and SUVs passed through, playing a recorded speech of the CM on a loudspeaker, people came out on the roads and stood atop terraces to catch a glimpse of Kejriwal.